Six Rules of Thumb for Bearing Selection and Use 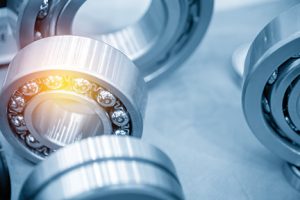 What load can a bearing carry?

Rule of Thumb: The range of normal loading applied to a bearing is between five per cent and 10 per cent of the published capacity.
Theory: The bearing capacity is defined by the load that after one million revolutions there is initiation of subsurface fatigue in 10 per cent of a population of the same bearing under the same load. In other words, we have 90 per cent confidence that any given bearing with the dynamic capacity applied to it will exceed one million revolutions.

But in today’s world, most bearings are running at 1,000 revolutions per minute or faster, and one million revolutions comes soon (1,000 minutes or 16.7 hours).

Use C3 for roller bearings over 75 per cent limiting speed
As roller bearings are generally taking a heavier load, and there tends to be some degree of sliding friction in a roller bearing, it is easy to see that the inner ring could run warmer than the outer ring. This difference in temperature takes away clearance from the bearing.

Based on this, we also consider that an oil bath does not have the ability to remove heat, so, in essence, one must consider an oil bath and grease to have the same thermal properties (at least within the scope of current standard calculation levels). There are also other speed-related limits for lubrication. The base for determining the ranges is the “ndm” factor, which is the mean diameter (mm) of the bearing multiplied by the speed (rpm).

Fortunately, online calculations will provide warnings when these limits are exceeded.

What ring is tight fit/loose fit and why
The ring that rotates must be tight fit; the ring that is stationary can have a loose fit (in applications in which the load is in a stationary direction like gravity or a belt pull). If you have a loose fit between a rotating shaft and the bearing bore of 0.001”, then the circumference of the shaft OD will be smaller than the bearing bore by 0.00314.” If that shaft rotates at 1,000 rpm, then one surface will be more relative to the other by 0.003” x 1,000 = 3” per minute. Two steel surfaces running 3” per minute against each other will generate wear. As a result, you must have an interference fit between these two surfaces.

When saying the stationary ring can have a loose fit, it is emphasized that this is a compromise, as in if both rings were a tight fit the machine would be difficult to assemble. As well, a loose-fitted ring is used to allow for axial thermal expansion of the shaft in some bearings. There are, however, bearing designs such as NU cylindrical roller bearings and CARB bearings that can compensate for axial expansion internally and, could have an interference fit with the housing they are mounted in. This would guarantee that there is no creep between the outer ring and housing if there is an unbalance or misalignment.

Kappa value of lubricant at least one but two to four is preferred
When selecting the viscosity of oil (or base oil in a grease), we want to ensure that it is thick enough (viscous enough) to separate the roller and race surfaces. For any given bearing size and speed, the required viscosity can be calculated. In addition, oil changes its operating viscosity with temperature. Therefore, we compare the required viscosity to the operating viscosity and call this ratio Kappa.

A Kappa of one is the minimum required to achieve film separation; we like seeing a Kappa between two and four to ensure that there is enough viscosity to ensure separation of the two surfaces.

Of note, a Kappa less than one allows metal-to-metal contact leading to wear and heat generation. A Kappa above four only creates more friction, which may or may not have any direct affect on the operation until you get excessively high Kappa values.

___________
Douglas Martin is a heavy-duty machinery engineer based in Vancouver. He specializes in the design of rotating equipment, failure analysis and lubrication. Reach him by e-mail at mro.whats.up.doug@gmail.com.