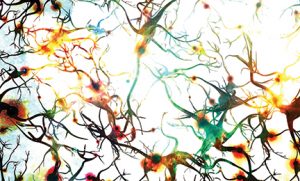 Using SEM to determine the root cause of bearing failure.

Scanning electron microscopy (SEM) has long been used by geologists in the mining, oil and gas production, and other industries to evaluate formations and determine elemental analyses for the purposes of calculating viability of various mineral or crude oil deposits. Using SEM to assist in the determination of causes of component failure or to confirm the conclusions has been overlooked. SEM can readily assist maintenance and engineering personnel in determining the root cause of failure.

In order to effectively use this analytical technology, a small sample piece cut from the component to be analyzed must be provided to the SEM analyst. The sample is fixed to the equipment and SEM scans its surface at high magnification determining the type of failure (i.e., abrasion, adhesion, erosion, corrosion and cavitation).

SEM is one of the best techniques available to study and document failure patterns and analysis. The scanning electron microscope provides a greater range of magnification (approximately 10,000X magnification) and a greater depth of field than a conventional macroscopic analysis. In addition, SEM provides a 3D image of the sample, through use of secondary electrons that are generated by the sample after being bombarded by electrons to create this image.

Elemental analyses can also be performed during an SEM study, by using an X-ray energy spectroscopy (XES) attachment. XES data are used to identify various precipitates or elements that may form on the specimen. For example, foreign deposits on bearings, pistons, mechanical seals, gears or other components can be evaluated and elements found within these deposits determined.

1. How would your maintenance department analyze the sleeve bearing illustrated below? 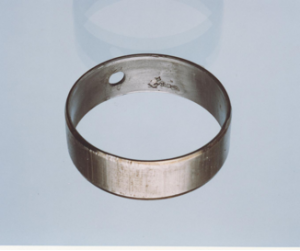 Logic: Bearings fail as a result of many potential causes, including fatigue, contamination, lack of or incorrect lubricant, water contamination, misalignment and excessive loads or speeds. For example, a camshaft bearing that was severely pitted for no obvious reason, but cavitation erosion (caused by the formation of oil vapour bubbles in low pressure areas and the collapse of those bubbles in higher pressure areas) as the shaft rotated pulled large metal particles away causing a catastrophic failure.

SEM analysis confirmed that as initial pitting and material removal continued due to the erosion, larger scale pits developed, resulting in deeper penetration of the vapour bubbles collapse, and ultimately resulting in further large-scale removal of bearing material.

Further investigation concluded that this type of failure could occur on diesel engine camshaft sleeve bearings under high-speed and/or high-load conditions.

2. What caused the bearing failure illustrated below? 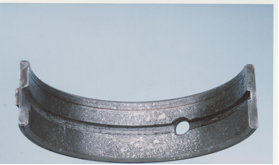 Logic: As in causal conditions noted in question 1, this failure could be considered obvious as indicated by the abrasive scoring and discolouration that suggests something became embedded into the bearing surface overlay.

Conclusions are often made that regular oil analysis should have provided warning of this contamination; however, SEM, analysis confirmed that scoring was caused by large particles of contamination “not found during routine oil analysis” because the contaminant particles were too large to be detected by spectroscopic analysis that typically can only detect particles in the six- to seven-micrometre range.

3. What caused the rolling element bearing failure illustrated below? 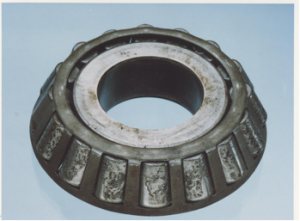 Logic: Initial inspection of the bearing strongly suggested that the bearing failed due to fatigue spalling due to its length of time in service. This is a common conclusion in many plants, but if a bearing is properly selected, correctly installed, properly lubricated, kept contamination free and operated at its designed load and speed, it can outlive the component in which it is installed.

SEM analysis confirmed that the apparent spalling was not caused by fatigue but by corrosion. This was evident by the smooth surfaces of the damaged areas as normal fatigue spalling creates sharp and/or jagged edges of the spalls. The smooth spalls indicate the occurrence of strong acids that resulted from water in the oil, which had evaporated during a period of hot shutdown just prior to a period of equipment storage. The bearing cones showed similar spalls, “but only on the bearing cone inner race surfaces that were above the surface of the oil.”

This particular failure could have been prevented had the maintenance staff had the oil analyzed for water and, on confirmation of contamination, replaced the contaminated oil before the equipment being parked for the season.

These case histories clearly illustrate that the use of SEM combined with elemental oil analysis, can be very useful in root-cause failure analysis investigations of any machine component.

__________________
L. (Tex) Leugner, the author of Practical Handbook of Machinery Lubrication, is a 15-year veteran of the Royal Canadian Electrical Mechanical Engineers, where he served as a technical specialist. He was the founder and operations manager of Maintenance Technology International Inc. for 30 years. Tex holds an STLE lubricant specialist certification and is a millwright and heavy-duty mechanic. He can be reached at texleug@shaw.ca.