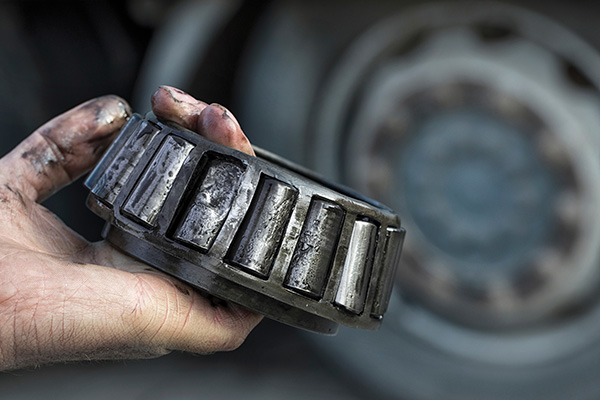 Troubleshooting of rolling element bearing problems and recognizing their root cause of failure is often difficult, because many failure types look very similar. This is because bearing failures are almost always precipitated by spalling or flaking conditions of the bearing component surfaces. Spalling occurs when a bearing has reached its fatigue life limit, but also when premature failures occur. For this reason, it is important for the troubleshooter to be aware of and able to recognize all the common failures of rolling element bearings. This ability to correctly troubleshoot and recognize the root cause of bearing failures will lead the analyst to the right conclusions.

We often hear the comment, even by knowledgeable and well-meaning engineers and technicians, “this bearing failed prematurely because it was defective.” Manufacturing defects in rolling element bearings make up less than one per cent of the millions of bearings in use today around the world and this small defect percentage is being reduced continually by improvements in manufacturing techniques and bearing materials.

Only a small fraction of all the bearings in use fail because they have reached their material fatigue limit. Most bearings outlive the machinery or component in which they are installed.

Q | Does the maintenance group understand what constitutes bearing fatigue life limits?
LOGIC: rolling element bearing life expectancy is directly related to the number of revolutions performed by the bearing, the magnitude of the load and the lubrication and cleanliness of the lubricant; assuming correct initial bearing selection and proper installation. Fatigue is the result of shear stresses, referred to as elastic deformation, cyclically appearing immediately below the load-carrying surface, as the rollers or balls pass over the raceway.

After many revolutions, these stresses between the rolling element and raceway surfaces will cause subsurface cracks to appear that will gradually extend to the surface of the rolling element, raceway, or both. These cracks may cause surface fragments of bearing material to break away. This condition is referred to as flaking or spalling that continues until the bearing has reached its life limit as illustrated below.

Q | Can the failure investigator explain the cause of the bearing failure illustrated below?
LOGIC: the frosted or smeared appearance of this bearing race illustrates what happens when the oil viscosity is too low (thin), and metal-to-metal contact occurs. This type of premature failure often occurs during initial start-up of heavily loaded bearings. This damage occurred after only 15 seconds of operation.

Q | Can the failure investigator recognize and explain the cause of the bearing failure illustrated below?
LOGIC: this bearing has failed due to continual welding contact between asperities on the metal surfaces, eventually causing metal to be ‘pulled out’ as the surfaces adhered to each other during rotation. This condition may have been caused by oil of the wrong viscosity, excessive load, speed, temperature, incorrect internal clearances, trapped contaminants or a combination of these conditions.

Even an increase of as little as 4° or 5° in temperature may contribute to these failures, due to unacceptable thinning of the lubricant’s viscosity. When analyzing the root cause of a failure, all the possible contributing causes must
be considered.

Q | Can the failure analyst recognize and explain the cause of the two bearing failures illustrated below?
LOGIC: the rusting and white colouration on the outer race of the first bearing show a combination of several possible conditions; including small vibrations causing oscillation of the outer race, reddish discolouration of moisture in the bearing caused by poor sealing, poor fits between the outer raceway and housing, lack of lubrication or improper installation. The second bearing shows serious dark corrosion on the inner raceway equidistant between the rolling elements that occurred while the bearing was stationary.

Q | Can the failure analyst recognize and describe the bearing failure illustrated below?
LOGIC: over lubrication is frequently the cause of grease lubricated bearing failure causing higher than normal bearing operating temperatures. Excessive grease quantities cause internal friction within the lubricant, which in turn promotes excessive temperatures causing oxidation and premature lubricant and bearing failure.

Excessive quantities of grease cause a churning action within the rotating components and the result will always be an increase in temperature. Oil of too high viscosity or grease with a too high consistency will also increase operating temperatures. Care must be taken when investigating high temperatures, that the troubleshooter must consider not only the possibility of excessive lubricant, but that the correct lubricant for the application is in use.

Q | Can the failure analyst explain the cause of the bearing failure illustrated below?
LOGIC: bearings are not safe from potential electrostatic discharge or stray currents generated by electromagnetic forces. In these bearing applications, it is recommended that the bearing be grounded using grounding brushes.

For users of fan and electric motor belts and conveyors, the industry standards that define minimum conductivity are RMA IP-3-3, ISO 1813, and ISO 9563. In addition, drive belt manufacturers recommend the use of static conductive belts of six megohms or less. This bearing’s inner ring shows clear evidence of corrugated surface damage caused by electric pitting.

The challenge for troubleshooters is to learn to recognize the difference between the tiny per cent of bearings that display material fatigue spalling that confirms their end of life and most bearings that display premature failures described above, because in many instances they look like the untrained eye.

It should come as no surprise to experienced equipment troubleshooters that assuming proper design, application, and lubrication, rolling element bearings will fail sooner or later due to their natural material fatigue life limit, but all bearings will fail prematurely from abuse or neglect.
__________________
L. (Tex) Leugner, author of Practical Handbook of Machinery Lubrication, is a 15-year veteran of the Royal Canadian Electrical Mechanical Engineers, where he served as a technical specialist. He was the founder and operations manager of Maintenance Technology International Inc. for 30 years. Tex holds an STLE lubricant specialist certification and is a millwright and heavy-duty mechanic. He can be reached at texleug@shaw.ca.