Ram Challenges the Raptor with the TRX

For anyone who grew up in the 1990s, Jurassic Park, was the movie, which created dinosaur madness across Canada. Look no further than Toronto’s new basketball team, which chose to be called the Raptors back in 1995. The movie spawned a franchise that is still going strong today, after two sequels, and a new Jurassic World franchise. 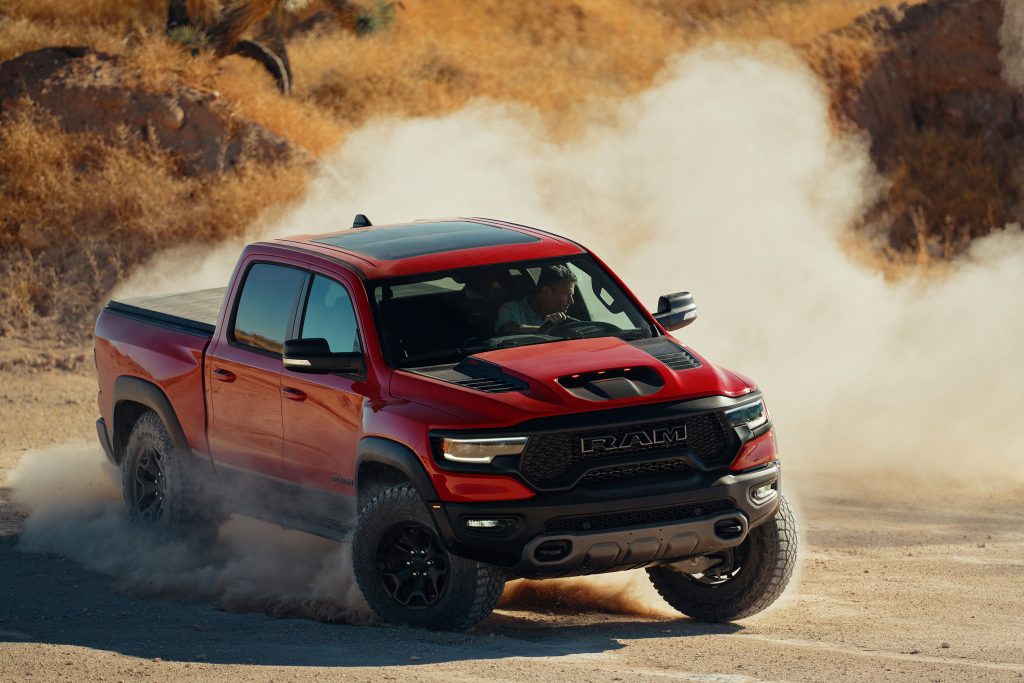 In the automotive world, dinosaur names are definitely not common. However, a few years ago, Ford decided to take its F-150 pick-up truck, turn it up to 150 per cent, and call it the Raptor. Since it debuted, it has not had a competitor in the ultimate performance pick-up truck space. Until now.

Anyone who has watched any of the Jurassic Park/World movies, knows that in the franchise there is only one dinosaur that is fiercer and mightier than the Raptor, and that is the T-Rex. Therefore, it is no surprise that FCA has decided to compete with the Ford Raptor, by naming its truck the Ram 1500 TRX, or as everyone will call it the T-ReX. 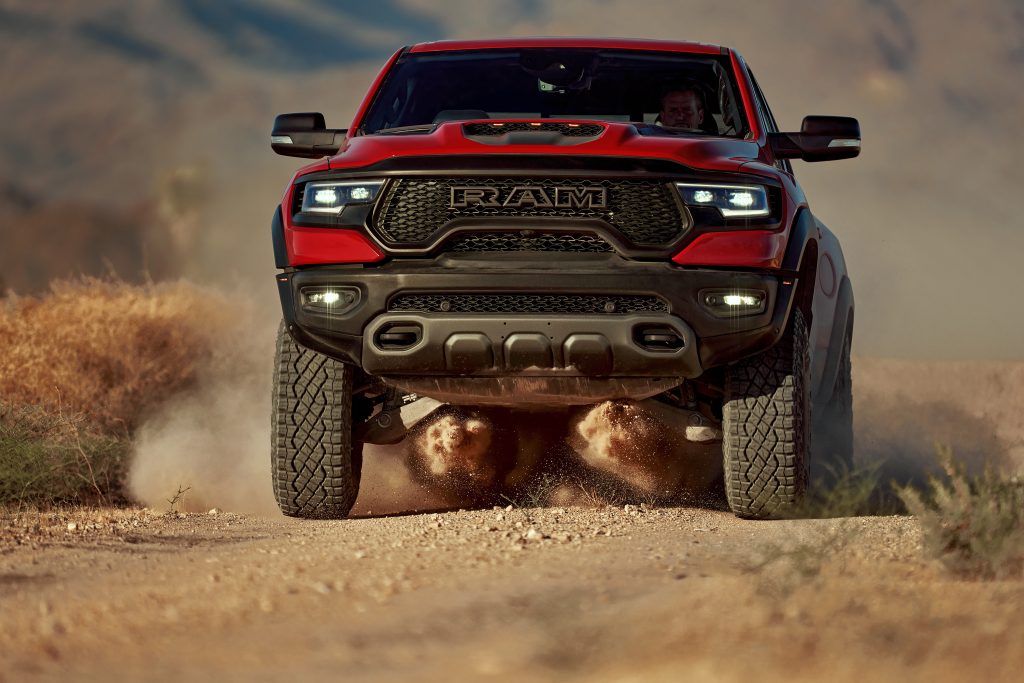 “The all-new 2021 Ram TRX sets the benchmark for extreme performance pickup trucks and solidifies Ram Truck’s position as the off-road truck leader,” said Mike Koval, Head of Ram Brand, FCA – North America. “Ram has a strong history of high-performance trucks and TRX adds to that while expanding the light-duty lineup with the segment’s best combination of performance, capability, luxury and technology.”

For starters, the TRX will be the latest member of FCA’s 700 horsepower club; joining the likes of the Dodge Charger and Challenger, and Jeep Grand Cherokee. In this application it will offer 702hp and 650 foot/pounds of torque from a 6.2 litre supercharged HEMI V-8 engine. Offering some mouth-watering numbers, it will go 0 to 60 mph (0-96 kph) in 4.5 seconds, 0 to 100 mph (0-161 kph) in 10.5 seconds, and the quarter mile in 12.9 seconds (at 174 km/h). Its top speed is 190 km/h. The engine is mated to an eight-speed automatic transmission, which has high torque capacity. 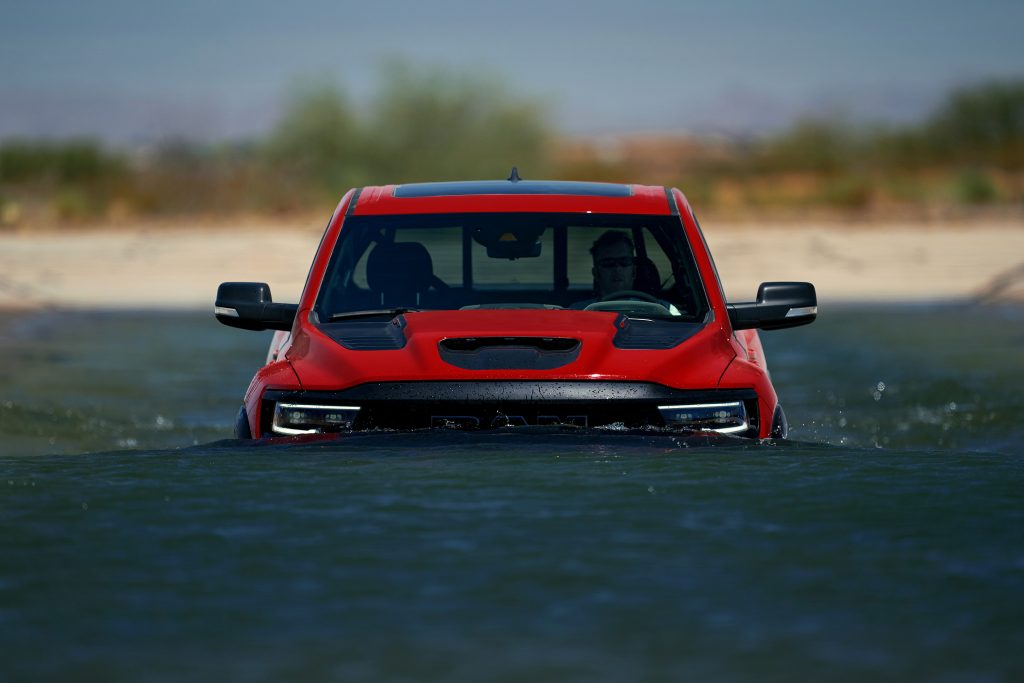 The powerful engine goes into a TRX that takes the standard Ram 1500 and stretches it, much like Bruce Banner turning into the Hulk. TRX is 203 millimetres wider, has a 152mm wider track, the front axle is 20mm farther forward, brakes are 381mm, ride height is 51mm higher (with ground clearance of 300mm, and water fording of 813mm), 18-inch wheels with 35” tires are exclusive. Being able to stop all the power and brawn is important, so Ram has put 15-inch (381mm) rotors all around on the TRX.

Ram decided that the front end on the standard Ram 1500 wasn’t big enough (it’s already one of, if not, the largest on the market), so it has larger and unique RAM badge, grille, skid plates, and steel bumpers. An aluminum hood has a hood scoop which allows for 50 per cent of air going into the engine, with the other 50 per cent going in through the grille, part of the dual-path air induction system (more on that later on). LED headlights and taillights are standard.

The back of the truck now offers larger box outers (while still allowing for use of blind spot monitoring), a Rebel inspired RAM badge is located on the tailgate, a bed-mounted spare tire carrier is available, with the standard spare tire located under the bed, along with oversized tow hooks. 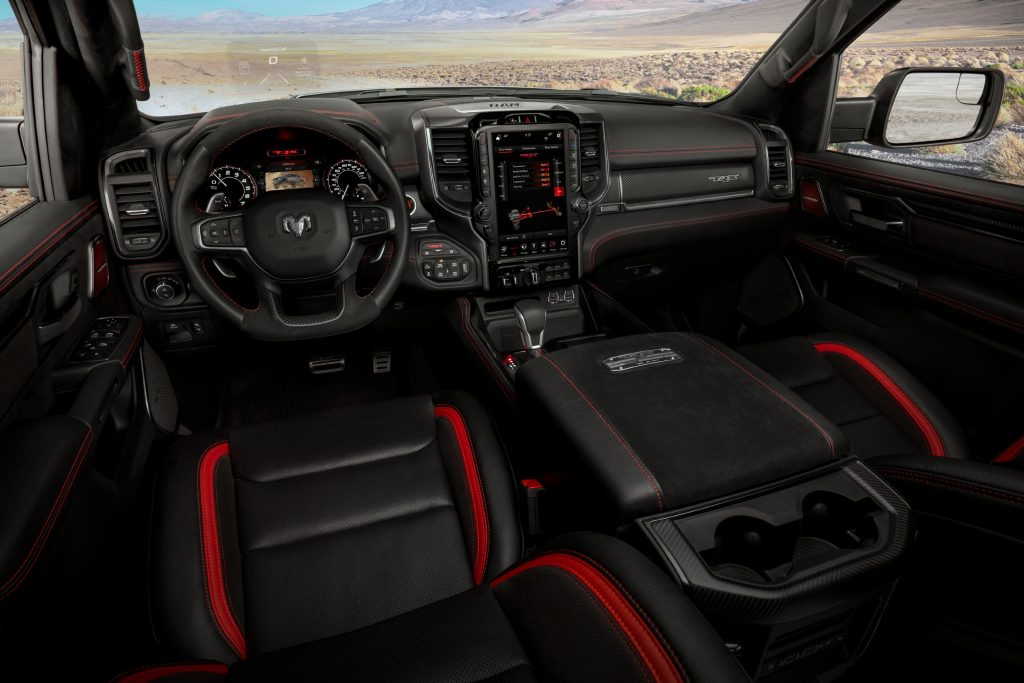 The interior of the truck is based on the Ram 1500 Limited, but with some changes. Front seats are new with more upper bolsters and TRX logos, while a new seat back system allows for items to be weaved in place. The steering wheel is an SRT flat-bottom design with aluminum paddle shifters, while a console mounted performance floor shifter is a departure for those familiar with RAM’s console turn shifter.

The Uconnect system standard on the TRX is a 12” model, and can be paired to a Harmon Kardon audio system with 900-watts and 19 speakers. An available head-up display can show up to five items at one time (lane departure, lane keeping, adaptive cruise control, navigation, speed, gear and speed limit). 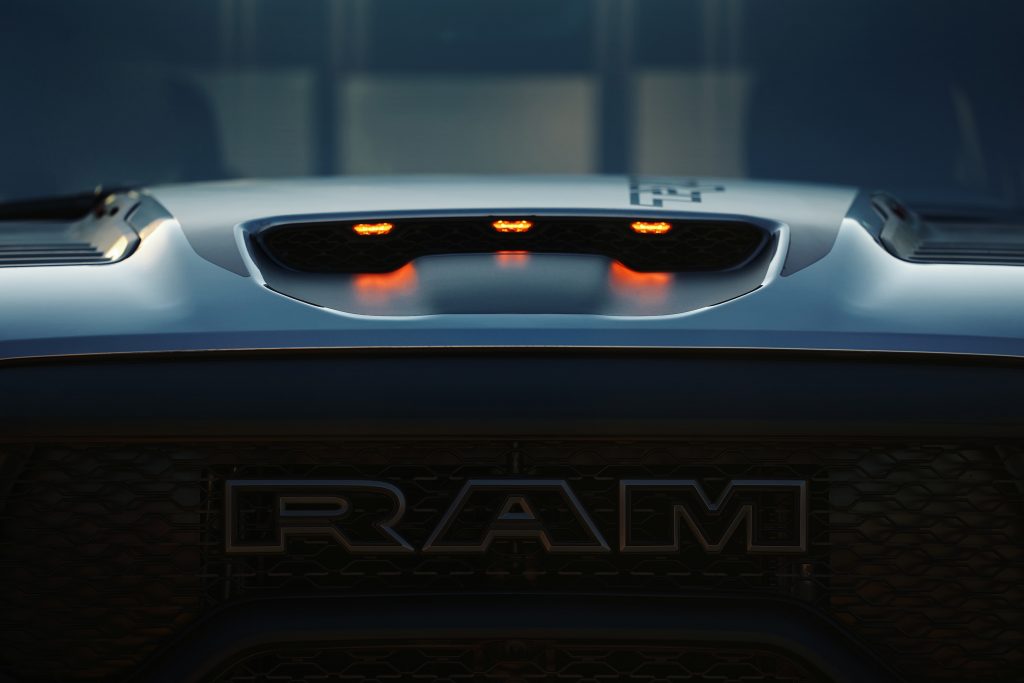 Moving on to the performance of the TRX, the massive horsepower and torque numbers are helped by use of a dual-path air induction system. As mentioned earlier, air goes into the hood scoop and upper part of the grille, to a 29L air box that filters out the things you don’t want going into the engine (dirt, water, sand, and debris). The air box has a one-way drain to get rid of water, while two air filters provide 198.4 sq./in of surface area.

For those times when using the TRX to do performance runs, standard launch control manages tire slip, by way of wheel speed sensors stopping wheel hop at launch, and helping to get the most grip available. While in motion, sometimes the need to be airborne may arise in the TRX. Naturally, Ram added jump detection, which can detect when a vehicle is in the air and change engine speed and torque, gear, transfer case torque split, damping rates, and others to help protect the vehicle. 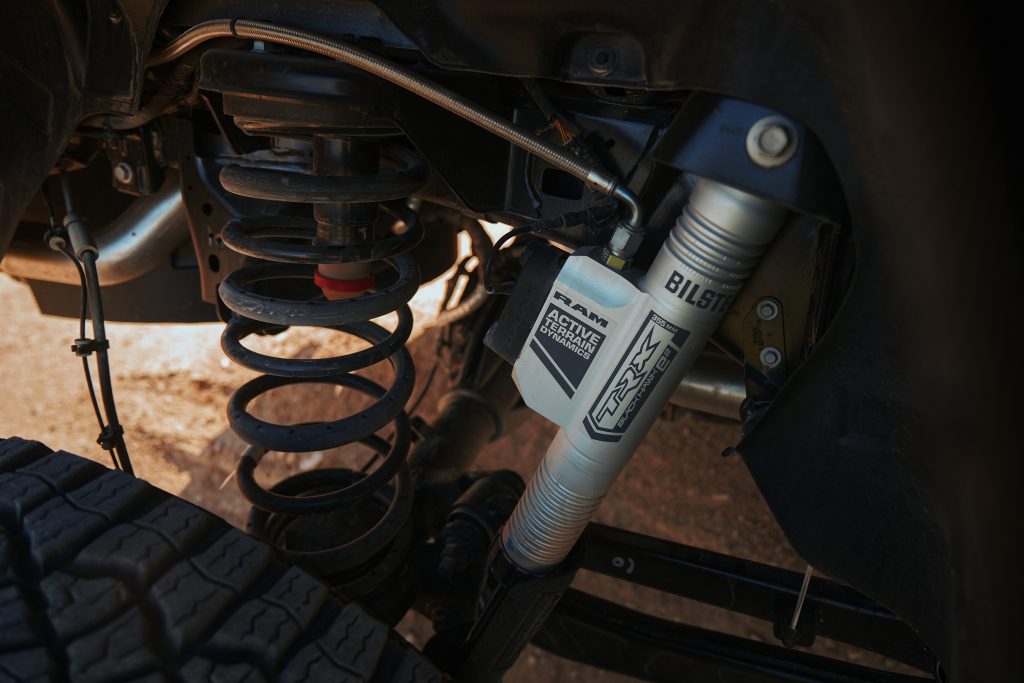 TRX has a new independent front suspension, and a five-link coil system in the back that allows the Dana 60 rear axle to move up to 330mm. The rear springs are 600mm in length, and the Bilstein Black Hawk e2 shocks are 64mm.

Ram also offers pages (visible in the instrument cluster) to help the driver keep tabs on what is happening in and out of the vehicle. Off-road pages show the driver: ride height, transfer case position, pitch and roll, and accessory gauges. While performance pages show timers, g-force, gauges, and engine performance. 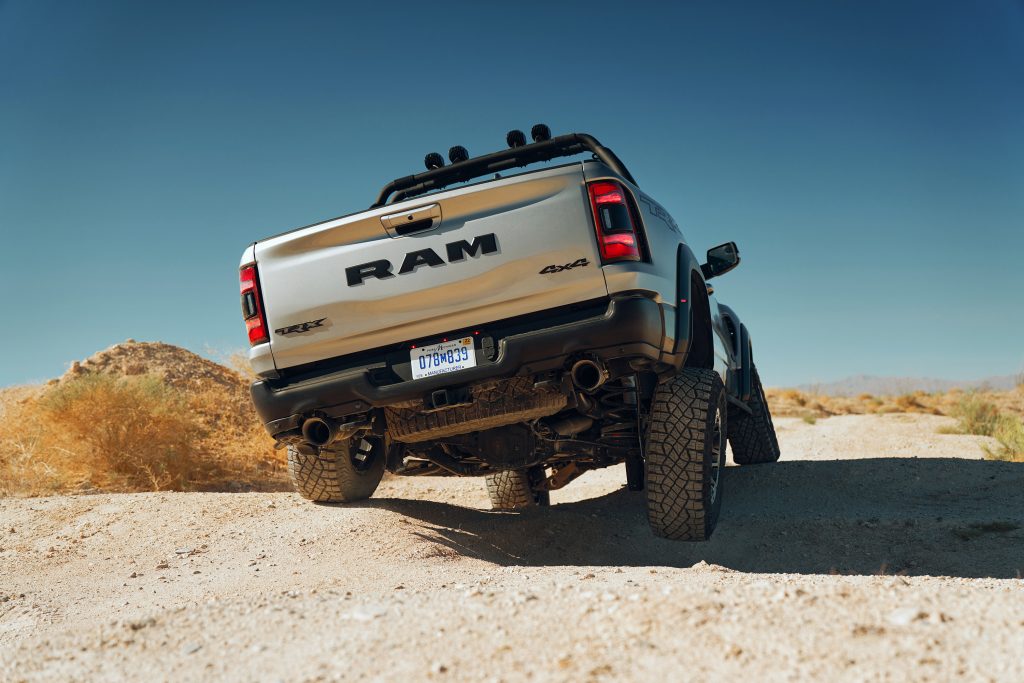 Safety and technology wise the TRX has the driver covered. It offers a 360-degree camera view, which includes a forward-facing camera that is used for off-roading. An available digital rear-view mirror replaces the glass view with a view from the rear camera. As with other versions of this style mirror, it can be revered to a regular rear-view mirror. A sampling of safety features include standard backup camera, ESC, and six air bags; and available blind-spot monitoring, adaptive cruise control, forward collision warning, and much more.

A little food for thought, according to FCA, the TRX can go 161km/h while off-road, has an approach angle of 30.2 degrees, breakover angle of 21.9 degrees, and departure angle of 23.5 degrees. 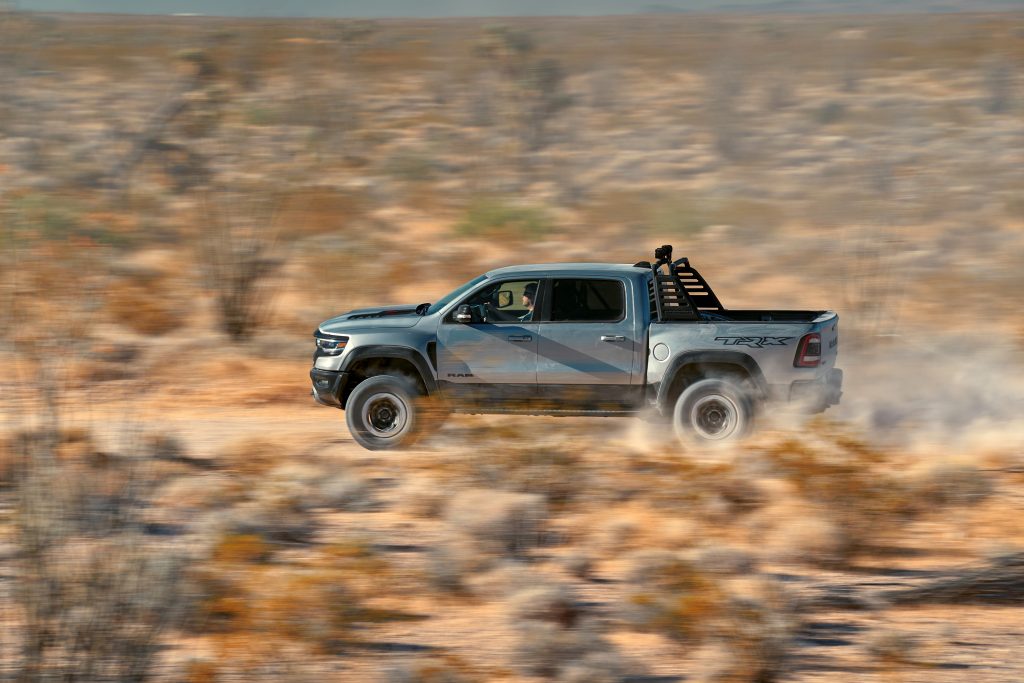 Now while not exactly a truck meant to tow or haul stuff in the bed, the TRX has a towing capacity of 3,674kg, and a payload capacity of 594kg. Therefore, for those time when not having fun off-road, the truck can take the boat to the cottage, or help a friend move their furniture.

FCA will start selling the TRX in a Launch Edition, of which 100 will be sold in Canada. It will feature a unique grey paint job, and offer a red and brushed-aluminum centre console badge. 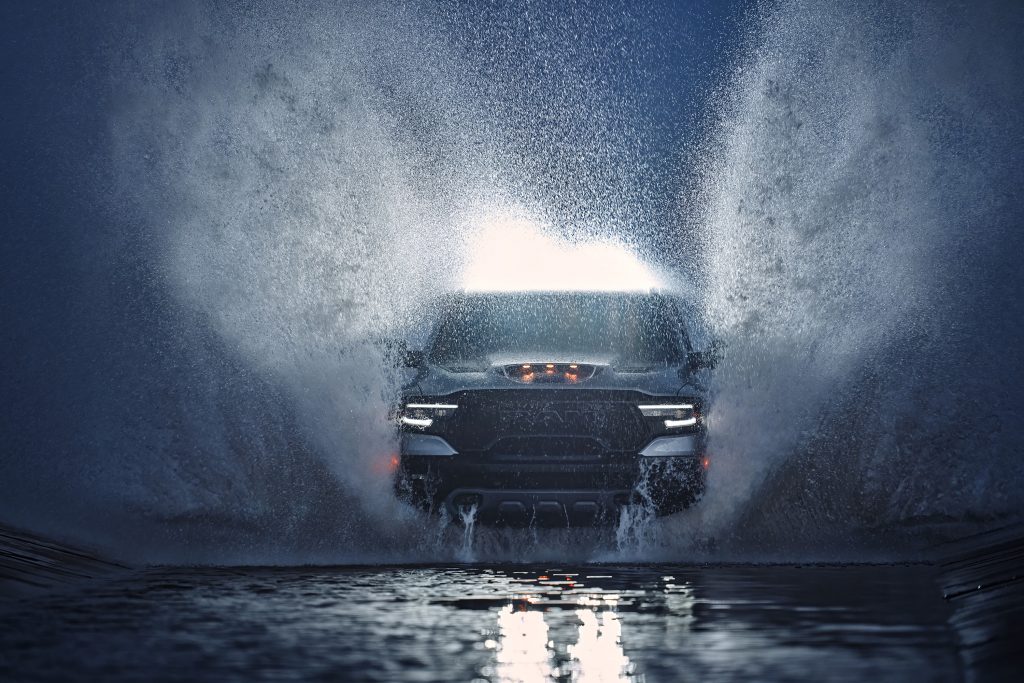 “The Ram team is as excited about the all-new 2021 Ram 1500 TRX as our customers are,” said Mike Koval Jr., Head of Ram Brand, FCA – North America. “Many of those customers have been asking for something special, even above the TRX’s already-loaded features.”

The battle of the dinosaurs (pick-ups) now pits the TRX against the stalwart Raptor. With the latter having been on the market for a few years without much competition, it is now time for the Raptor to respond to the TRX’s challenge. 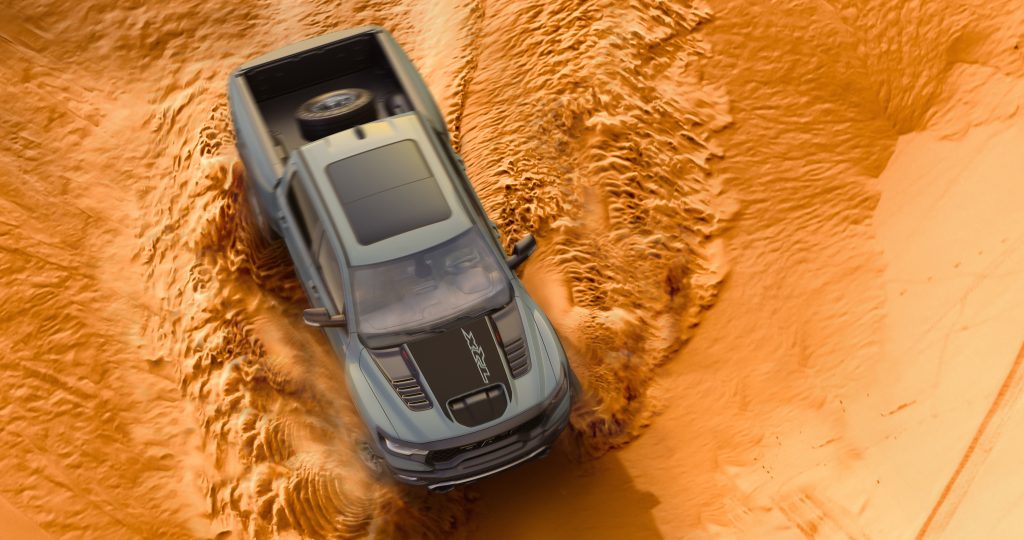