Definition: Ensuring that all maintenance practices for components associated with the bearing are at a level as to allow the maximum performance of the bearing. These include, installation practices, tools used, skills of millwrights, accuracy of mating components, alignment and balancing of the rotating assembly. 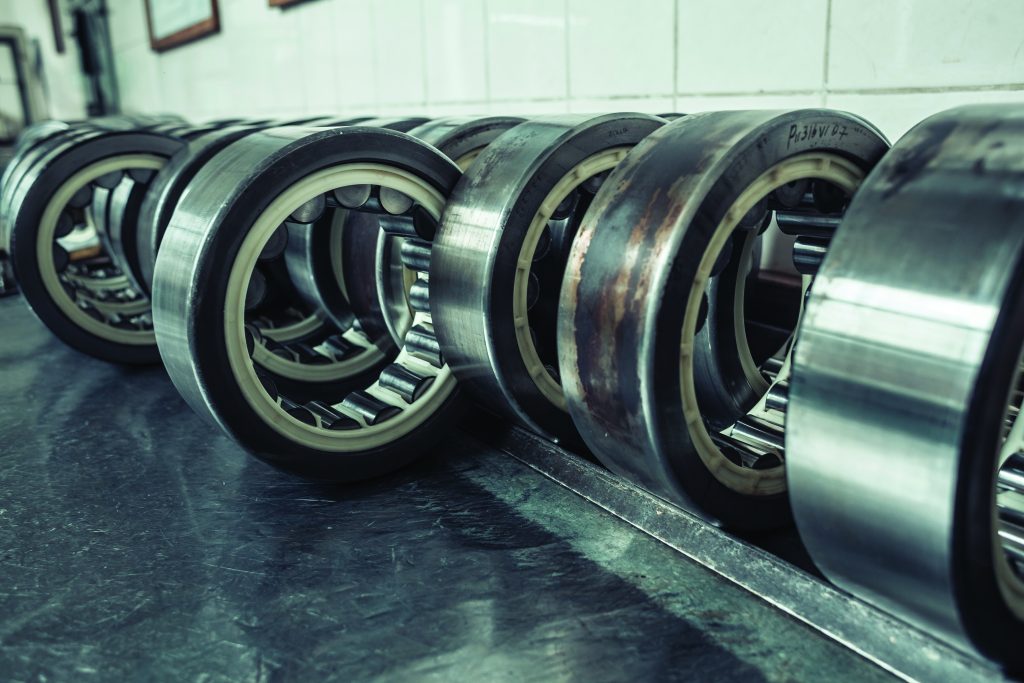 Let’s start with a discussion about effects of a lack of precision maintenance. There was a case of an oil refinery that was having a recurrent failure of a fan. The mean time between repair (as the vibe crew would pick out a defect) was six months. Looking back, I remember how proud the vibe team was and how an outer ring of a bearing on display, marked in paint pen $10,000 in savings, to demonstrate their successful diagnostics.

When attending the installation, the first question the millwright asked was why was the tapered adapter sleeve so loose on the shaft prior to driving the bearing up the sleeve? Indeed, it easily slid onto the shaft instead of the usual resistance of a typical adapter assembly.

Looking at the adapter sleeve and noted what was the correct part number used, in reasonable condition. The part was made in France. This was unusual as I’d never seen a sleeve of this brand made there. It made me wonder if it was counterfeit, turned out, the parts were made in France; however, production ceased by the end of the 1970s.
When discussing this with the planner, the job plan simply said “change bearing” but there was no reference to components, including the adapter assembly. Back to the install, this loose sleeve was replaced by a new sleeve and the fan was assembled and was no longer a bad actor.

What were the lessons?
Good well-trained mechanics know of the issues, but there is no feedback loop due to process or culture. Invoking precision maintenance would encourage a culture allowing open communication.

The job plan was inadequate as it failed to include the least expensive component of the assembly in the BOM. The deficit was written into the job plan for more than 20 years without any apparent review. Whether the omission was due to a lack of knowledge about the assembly, or a cost savings was unknown.

Precision maintenance procurement
Recently. I was in a paper mill rebuild shop and was shown a part which arrived from a distributor. It was asked why the bearing part number on the distributor label was different from the bearing part number on the manufacturer label. That label had the manufacturers’ part number and the mill’s store code. There was one letter missing at the end of the part number and that single number would indicate that a critical component was not included. The millwrights were concerned that they had the correct part.

Digging further, the distributor’s ordering system called out the complete manufacturers’ part number and the associated store’s code for the paper mill. As it turns out, the data field for the label printer had a limit to the number of characters and that last letter was left off the part number.

In this case the vibration readings were being taken during the time the clutch was engaged and, in this case, there is no relative motion between the inner and outer rings. In terms of bearing monitoring, there would be little worthwhile data to collect, as without relative ring motion, no damage frequencies would be apparent.

With precision maintenance and failure mode effects analysis (FMEA) should be done to determine the most critical failure modes and what the most effective method is to detect it. In the case of the clutch, a visual inspection once per month with a borescope was initiated. The vibration readings were restricted to only the mode where there is relative motion of the bearing (when it would generate damage frequency).
Elevate standards of precision where needed, capture the data that is already there.

At my sessions I discuss the measurement of bearing seats and how three diametres should be taken in three planes (nine measurements total). Then discussing the allowable out of round and taper is half the diameter tolerance. This is to maintenance personnel whose job card only asks for the diameter (one single value). The irony is that will take multiple diameters and simply record the average when the data is there to at least tell that the shaft or housing is out of round (at least).

They do rebut saying that this has been the practice for 20 years and the machine runs fine. Which may be true, but the extra time to document is nothing, as the machinist is already there and has set his instruments up. However, there is a difference between documentation and allowances of deviations. Nothing is wrong with the documentation of diametres, out of round and taper, even if the specification for OOR and taper have been decided to be the same as the diameter. The data is there if something does start going wrong.
In addition, it develops a habit/instils the culture of precision maintenance, so when there is an issue, the practices are in place.

The bearing manufactures publish a range of tolerances for shaft and housing fits as a function of bearing loading. This directly demonstrates the understanding that the diameter tolerances are flexible based on application conditions. There is no reason why a facility cannot do the same for their machinery, based on experience and criticality to the operation. MRO

_____________-
Douglas Martin is a heavy-duty machinery engineer based in Vancouver. He specializes in the design of rotating equipment, failure analysis, and lubrication. Reach him at mro.whats.up.doug@gmail.com.