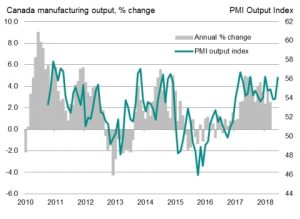 However, intense supply chain pressures continued, which contributed to the greatest accumulation of unfinished work since the survey began in October 2010. Rising demand for inputs and higher prices for metals also led to the fastest increase in average cost burdens for over seven years.

The seasonally adjusted IHS Markit Canada Manufacturing Purchasing Managers’ Index (PMI) registered 57.1 in June, up from 56.2 in May and the highest reading in over seven-and-a-half years of data collection. Stronger output growth, improved sales volumes and a survey-record pace of inventory building were key factors behind the elevated PMI reading in June.

Manufacturers reported the fastest rise in production levels for five months in June, which was linked to increased capacity and rising workloads. Meanwhile, new work expanded at the strongest pace since November 2013. Survey respondents widely commented on greater demand from both domestic and export markets (particularly the US).

There were signs that manufacturing companies struggled to keep up with rising workloads in June. Volumes of unfinished business increased at a survey-record pace, which was mainly linked to high levels of capacity utilization. Some manufacturers also noted that stretched supply chains had also resulted in a build-up of outstanding work at their plants.

Average lead times from vendors lengthened to the greatest extent since the survey began in late-2010. Anecdotal evidence suggested that transportation delays and stock shortages among suppliers had led to worsening vendor performance. Manufacturers again sought to build safety stocks during June, with the latest rise in pre-production inventories the largest in more than seven-and-a-half years of data collection.

Manufacturers are upbeat about their growth prospects for the next 12 months, but the degree of optimism eased to its lowest since March. Despite a robust pace of job creation in June, some firms noted that capacity constraints were likely to act as a brake on production growth at their plants.

“June data signalled impressive growth momentum across the manufacturing sector, with business conditions improving at the fastest pace since the survey began in 2010,” said Christian Buhagiar, President and CEO, SCMA.

“Quebec was the star performer in the latest survey period, with manufacturing production rising at a survey-record pace,” said Buhagiar.

Buhagiar said that all parts of the country are experiencing supply chain difficulties, reflecting strong demand for manufacturing inputs and shortages of transport capacity.

In addition, Buhagiar said that concerns about raw material availability continues to stimulate efforts to build up inventories in June, “with the latest rise in pre-production stocks the fastest in more than seven years of data collection.”