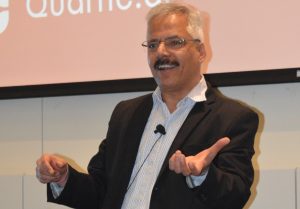 Rajiv Anand, Quartic.ai’s founder and CEO, is on a mission to make legacy infrastructure ‘smarter’.

Machine learning technology is enabling the way data-driven decisions or predictive maintenance is performed in industrial plants, yet the struggle to keep pace with cutting-edge solutions is ongoing.

The holdup may be due to a lack of expertise in fitting new solutions into existing technology stacks or finding ways to put it into use in practical applications on legacy systems.

One technology start-up that’s helping bridge the gap for using data from legacy equipment in the industrial manufacturing marketplace is Quartic.ai. Based in Waterloo, Ont., the artificial intelligence (AI) and Industrial Internet of Things (IIoT) specialist is developing an end-to-end industrial analysis, sensor-based process automation and predictive maintenance platform.

“Our focus is to make legacy infrastructure ‘smarter’ as we enable manufacturers to retain their existing operational technology (OT) infrastructure and adding intelligence to it,” says Rajiv Anand, Quartic.ai’s founder and CEO.

In essence, the solution is designed to use data from sensors and machines, as well as from ERP systems, data historians, or CMMS systems, and turn it into contextual data. Quartic.ai is a modular platform that is designed with industrial end users in mind, so implementing the platform requires no formal data science or coding background, says Anand, who has a background in process control and automation.

Good contextual data is needed for any good machine learning to work, says Anand. “In data science, 60-70 per cent of time is spent in developing the contextual data. We created a platform that automates that process. Our Illuminator application automatically creates the context of the machine, regardless of how many data sources the data came from.”

Illuminator extracts data from any physical asset or machine – such as rotating equipment, a compressor, a boiler, or fermenter – and feeds a data pipeline (also known as a flowing context in real time). A standout feature is that operators can then build their own machine learning models since the application is built on Kafka, an open protocol used for complex micro processing. The data collected could be related to a machine’s condition, its operation or performance history in general.

Illuminator is gateway for asking, “What type of problem am I trying to solve? How am I going to solve it?” Once integrated, which is a straightforward process, the next step is to make sense of the data. For this purpose, Quartic.ai has developed another offering, ContexAlyze, which is an enabler for performing powerful visual analytics, including such tasks as root cause analysis or slow degradation of equipment. The application can be tailored to meet the specific requirements of the customer, and allows the user to share just a snippet of information, annotate it, or share information across the organization, says Anand.

But the core of machine learning takes place once another application (MetaTrainer) is applied. A drag and drop facility allows the user to add unique specifications. For example, if users wanted to build a cavitation predictor on a pump, they would drag and drop the variables in the context of the asset, and, if they choose, add other variables that may have influenced the cavitation (such as the pump speed or pressure).

Looking for correlations in data, feature extraction and feature engineering can be time-consuming, says Anand, but Quartic.ai automates these tasks by allowing users to select features based on their domain knowledge. Moreover, the application is capable of building three models in parallel – each built on slightly different features – and cross-validating the models before allowing the user to approve a preferred model to deploy and provide insights.

Once slurry is processed from ore, it is processed under high pressure in large vessels with multiple agitators. The mineral-processing facility had several failures with its shafts, including broken shafts.

“The big concern was that it could lead to agitator seal leakage, which could have safety consequences,” says Anand.

The facility wanted to address the failure as a potential safety hazard, says Anand. “They had tried to address the issue through vibration, temperature and other condition monitoring tools, but the condition sensors alone would not overcome the problem. Exploring whether machine learning could be applied was the next option.

The facility was able to provide three years worth of historical data related to the shaft failure. Anand’s team noticed that there wasn’t anything significant from the condition sensors leading to the failure, and it validated why they were not able to solve the problem using traditional condition sensors.

The most telling indicator was the “behaviour” of the shaft horsepower. “This was a big revelation. Plants and facilities have access to all sorts of smart electrical measurements and there is so much information available about the electrical behaviour of an asset. We learned that if we built a model for this shaft, it ought to be around power.”

Essentially, the problem stemmed from the fact that material builds up on the impellor and the shaft over time. This action causes asymmetry and the resultant imbalance of the shaft, which can lead to seal failure. Using power prediction, the recommendation was to build a predictor for how much material is being built up in the impeller and the shaft to create a predicted value and a corresponding preventive maintenance plan.

Without having the facility change its work processes or systems, Quartic.ai took the prediction output from its model and wrote it back into the facility’s SCADA control system so operators could see it on the screens they use daily. This process would cause very little disruption and it became a variable they could monitor in real time and it would provide an early warning of potential failure. “The facility’s operators set up rules on top of the predictions, as they are the best judge of ‘abnormal’ equipment behaviour,” says Anand.

The tangible advantages of implementing the application at the mineral-processing site include user participation, as well as time and cost savings, says Anand, who estimates that a minimum of 30 hours of downtime that was prevented.

Whereas machine learning and AI are generally touted as buzzwords, Anand says that with widely deployed sensors and greater connectivity, manufacturing plants are not only be able to squeeze out noticeable improvements in efficiency or flexibility, but are also able to become predictive maintenance differentiators by paving the way forward with data-driven decisions.