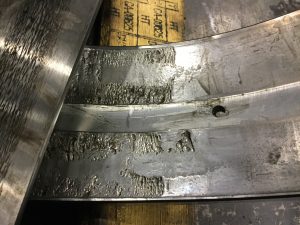 Recently, I was asked to inspect four bearings from two pulleys from an oil sands mine. One of the assemblies was removed due to indications of damage caused by vibration analysis. The four bearings gave a good picture of typical damage and progression of the damage in such an application.

What was seen in the least damaged bearing is typical of these applications, a load zone that spans about 120 degrees. This is the area of the outer race that is carrying the load of the application. At each end of the load zone, the load in itself lessens to zero and the pattern has a tapered look. 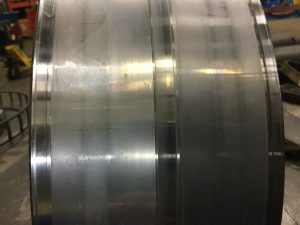 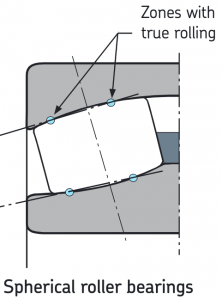 As this bearing turns the centre section of the roller, contact slides and wear occurs. Then there are two bands of rolling contact, and beyond them to the roller end is sliding contact. Since the load on a roller is heaviest at the centre and lightest at the ends, there is a corresponding drop in the rate of wear as one moves from the centre to the ends of the roller. 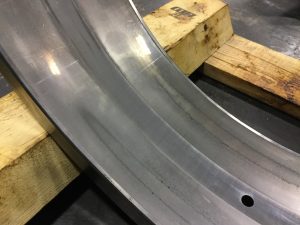 The centre area of the rollers and race wear faster than the outer edges. Eventually what happens is that the roller develops a flat spot between the rolling contacts. This will essentially shift the heaviest contact of the roller from its centre to the less worn areas just past the pure rolling areas. Since the load is now carried over a smaller area, fatigue cracking will set in.

This is seen not in the centre of the races, but on either side of the centre. We see a smoother flat area between the fatigued areas of this outer race. Once the raceway begins to fatigue and flake, the generated steel particles act as abrasive particles, further accelerating the wear process. At some point in time, the ring itself may begin to fracture as it is worn thinner.

So What’s the Solution?
One answer may be to improve the sealing to prevent the ingress of abrasive particles. Another solution may be to increase the frequency of re-lubrication to purge out the contamination.

However, the issue may also be that the speed of rotating may be too slow to create a lubrication film. The only way to address this is to use a lubricant with a proven additive package or even solid additives.