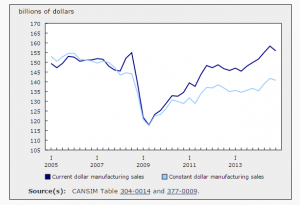 Ottawa – Manufacturing sales reached an all-time high in 2014, increasing 5.3% to $621.7 billion, according to a new report from Statistics Canada: Manufacturing: The year in review, 2014. Higher sales were reported in most industries, with transportation, primary metals and food recording the largest gains. Constant dollar sales rose 2.7%, indicating a higher volume of goods sold.

The Canadian manufacturing sector reached a milestone in 2014 as sales surpassed their pre-recession high of $605.5 billion in 2006. Following a relatively stable period before the recession, the sector recorded significant losses during the economic downturn. Sales dropped 17.6% in 2009 as the global economy entered the recession. Manufacturing sales reached their lowest level in the second quarter of 2009. Sales rebounded in 2010 and 2011, but recovery slowed in recent years. The US manufacturing sector was quicker to rebound after the recession, with sales surpassing the pre-recession high in 2011.

Despite the current dollar gains, constant dollar manufacturing sales in 2014 remained below pre-recession levels, which peaked at $611.1 billion in 2005, indicating that higher prices were partly responsible for the growth in sales over the past few years.

Among the 21 manufacturing industries, 19 posted higher sales in 2014. Both durable and non-durable goods contributed to the increases. Transportation equipment, food, and primary metals were mainly responsible for the overall rise, accounting for about two-thirds of the dollar gains.

Sales of food products rose 7.1%, representing more than half of the dollar gain in non-durable industries. The increase stemmed primarily from meat product manufacturing, which rose 15.2%. Manufacturing sales of animal slaughtering (except poultry) increased 28.3%, following three years of declines. The gains in this sub-industry reflected prices, which rose 17.8% on average in 2014. 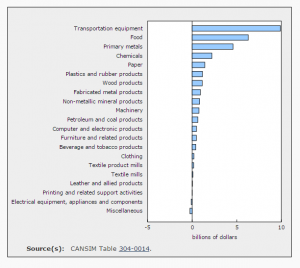 Manufacturing sales in 2014 by industry, change in billions of dollars from 2013.

In January 2014, Canada reported its first case of porcine epidemic diarrhea virus, a highly contagious pig disease. The price for pork spiked 34.5% from January to April 2014, as a result of supply concerns in the industry. Prices in the animal slaughtering (except poultry) sub-industry stayed high throughout 2014.

Sales of primary metals rose 10.5% to $48.0 billion in 2014, reflecting widespread increases among manufacturers in the industry. Manufacturers of iron and steel mills and ferro-alloy posted the largest gains, as sales for the sub-industry rose 26.9%, partly as a result of higher prices.

Ontario accounts for more than half of the national gain

In Quebec, transportation equipment was also the main contributor to the sales growth, mainly as a result of higher production of aerospace products and parts (+14.1%). Despite the upward trend in the province, aerospace production remained slightly below its high recorded in 2008.

The declines in Nova Scotia and New Brunswick were due to lower sales of non-durable goods. Exports of refined petroleum products declined in New Brunswick in 2014.