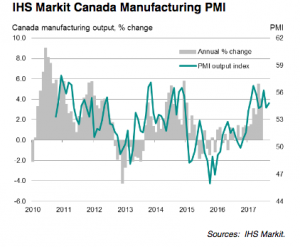 September data revealed a positive month overall for the Canadian manufacturing sector, with output and new business growth regaining momentum after August’s slowdown, according to IHS Markit Canada Manufacturing Purchasing Managers’ Index (PMI). The report says manufacturers are also more confident about the year ahead business outlook than at any time since April.
However, the latest survey indicated a sharp and accelerated rise in input costs, alongside the
strongest increase in factory gate charges since March 2014. Some firms attributed rising raw
material prices (especially chemicals) to supply chain disruptions in the U.S. following Hurricane
Harvey.
At 55.0 in September, up from 54.6 in August, the seasonally adjusted IHS Markit Canada Manufacturing Purchasing Managers’ Index (PMI) posted above the 50.0 no-change value for
the nineteenth consecutive month. The index signalled a robust improvement in manufacturing
business conditions, although the strength of the recovery remained slightly softer than April’s six-year peak.
A key factor behind the rise in the headline PMI since August was faster rates of output and new order growth. Reports from survey respondents cited improving client demand, a supportive economic backdrop and successful product development. While manufacturing companies generally commented on resilient domestic demand, some also noted that subdued export sales had held back growth in September. Latest data indicated only a marginal rise in new orders from abroad, which was partly linked to weak demand from U.S. clients.
Canadian manufacturers indicated a solid degree of job creation in September, although the rate of employment growth eased from August’s survey-record high. Survey respondents commented on renewed efforts to boost capacity in response to rising demand, although some noted that skill shortages had made it more difficult to fill vacancies. Looking ahead, manufacturers are confident about their prospects for output growth over the next 12 months, with the degree of positive sentiment the strongest since April.
Meanwhile, input cost inflation reached its highest level for four months in September, which
manufacturers overwhelmingly linked to rising raw material prices. A number of firms noted that U.S. supply disruptions had pushed up prices for chemicals, fuel and metals.
Source: IHS Markit
Print this page