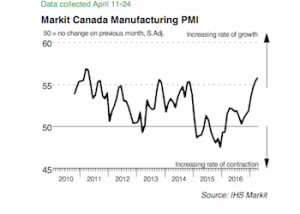 Canadian manufacturers signalled a further upturn in growth momentum in April, with overall business conditions improving at the fastest pace for six years, according to the Markit Canada Manufacturing PMI Report. This reflected a steeper rise in new work and greater job creation, alongside another robust increase in production volumes.

Higher levels of client spending encouraged a sustained rebound in input buying and inventory building across the manufacturing sector. However, strong demand for inputs contributed to rising raw material prices in April, with cost inflation accelerating to its fastest since May 2014.
Key findings:
•    Business conditions improve at fastest pace since April 2011
•    Headline PMI boosted by steeper rises in new orders and employment
•    Sharpest upturn in stocks of inputs for almost five years

At 55.9 in April, up from 55.5 in March, the seasonally adjusted Markit Canada Manufacturing Purchasing Managers’ Index (PMI) registered above the 50.0 no-change threshold for the fourteenth month running.

Moreover, the latest reading signalled the strongest improvement in business conditions for exactly six years. This mainly reflected faster rises in new orders and employment numbers in April. Production volumes increased at a robust pace during April, with the latest expansion only slightly slower than the 40-month peak seen in March.

There were signs that stronger demand had created renewed pressures on operating capacity, as highlighted by a rise in backlogs of work for the first time since the start of 2017. Greater-than-expected sales growth also contributed to a depletion of finished goods inventories, although the rate of decline was only marginal.

New order growth accelerated to its steepest since November 2013. Manufacturers mainly cited improved domestic sales, supported by a rebound in energy sector spending. April data pointed to a moderate increase in new export orders, with the rate of expansion the fastest since March 2016.

Increased volumes of incoming new work underpinned a robust and accelerated upturn in staff hiring across the manufacturing sector during
April. The rate of job creation was the steepest since March 2011. This was partly driven by a continued rebound in business optimism regarding the year-ahead outlook. Reflecting this, the balance of Canadian manufacturers expecting a rise in production requirements over the next 12 months reached its highest level since February 2014.

Meanwhile, the latest survey revealed a robust rise in purchasing activity among manufacturing companies, which fuelled the steepest pace of stock building for almost five years.

Stronger demand for raw materials contributed to a sharp and accelerated pace of cost inflation in April. Higher prices for steel and chemicals were mentioned in particular. Pressure on margins resulted in another robust increase in factory gate prices.

According to Christian Buhagiar, president and CEO, SCMA, “The recovery in the Canadian manufacturing sector gathered momentum in April, with the latest survey of supply chain professionals showing the biggest growth in business confidence and employment for six years. A rebound in energy sector spending helped to boost sales for their suppliers in the manufacturing sector, and Western Canada has now posted six consecutive months of job creation. Domestic demand has fueled manufacturing growth so far in 2017, and there were also signs of a revival in export orders in April. With the global economic outlook becoming more positive, Canadian manufacturers are gearing up for stronger growth ahead. Job creation was the fastest since March 2011, while pre-production stock building reached a five-year peak.”