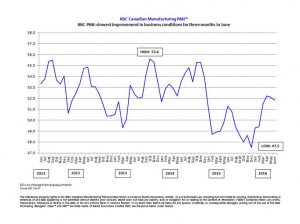 June  data  suggested  that  the  Canadian  manufacturing  recovery stepped down a gear at the end of the second quarter, with output, new business and employment growth all easing slightly since May, according to the RBC Canadian Manufacturing Purchasing Managers’ Index (RBC PMI), a comprehensive and early indicator of trends in the Canadian manufacturing sector. Moreover,  new  export  orders  were  virtually  unchanged  in  June, which contrasted with the solid contribution to growth seen earlier in 2016. At the same time, stocks of finished goods dropped at a survey-record pace in June, with manufacturers noting that subdued client  demand  and  uncertainty  about  the  economic  outlook  had encouraged tighter inventory management at their plants.

Adjusted for seasonal influences, the RBC Canadian Manufacturing PMI  registered  51.8  in  June,  down  from  52.1  in  May. (PMI readings above 50.0 signal an improvement in business conditions, while readings below 50.0 signal deterioration.) Although  the index posted above the 50.0 no-change value for the fourth month running, the latest reading signalled only a marginal upturn in overall  business  conditions  and  the  weakest  pace  of  improvement  since March.

A slowdown in output growth from May’s 11-month high was on of the key factors weighing on the headline PMI during June. The latest expansion  of  production  volumes  was  the  weakest  since  March, which  manufacturers  linked  to  softer  client  demand  and  efforts  to reduce finished goods inventories at their plants. Post-production stocks  have  now  fallen  in  each  month  since  April  and  the  latest reduction was the steepest for over five-and-a-half years.

Canadian  manufacturers  indicated  a  marginal  upturn  in  overall new  business  volumes  in  June.  The  latest  survey  suggested  that domestic  sales  were  a  key  driver  of  growth,  as  new  export  work was broadly unchanged over the month. Higher levels of business underpinned  further  staff  recruitment  across  the  manufacturing sector in June, which extended the current period of net job creation to  four  months.  However,  the  pace  of  employment  growth  eased slightly since May amid reports of heightened uncertainty about the business outlook and a lack of pressure on operating capacity.

Survey  respondents  pointed  to  ongoing  supply  chain  pressures in  June,  with  average  lead-times from  vendors  lengthening  to  the greatest degree since December 2014. This was linked to unusually low stocks at suppliers and a marginal upturn in input buying among manufacturers.  Despite  a  rise  in  purchasing  activity,  latest  data signalled  that  pre-production  inventories  were  broadly  unchanged over the month, which firms mainly linked to cautious stock policies at their plants.

June  data  signalled  a  return  to  rising  factory  gate  charges  among Canadian  manufacturers, although the  rate  of  inflation  was  only marginal. A number of firms noted that subdued underlying demand had acted as a brake on output charge inflation and placed pressure on margins. Moreover, higher steel and fuel prices contributed to a robust rise in average cost burdens in June. The latest increase in overall input prices was the fastest recorded since March.