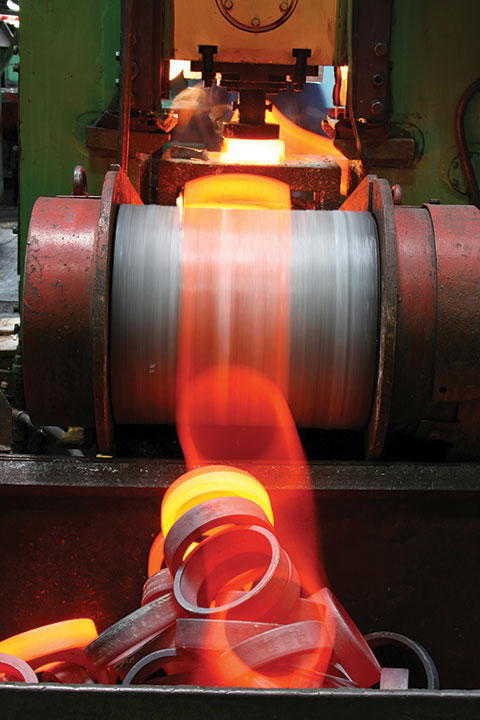 Very often the report of a hot bearing is based on someone putting their hand on the housing and it “feels” hot. So what temperature should a bearing be running at?

What temperature does a bearing operate at?
This is a magical question and it is more about heat transfer than about bearings. Anyone who has studied any “heat transfer” equations will know the complexity and many variables and iterative equations that one has to use to determine the temperature of a mechanical part.

Knowing this, it is easy to understand that “what temperature should the bearing run at” is not a simple one. As there are too many variables to consider.

What is true is:
• When a bearing runs, it generates heat;
• The amount of heat generated is a function of bearing design, speed, oil viscosity, and load;
• Extra heat is generated by unusual loads, deterioration of lubricant, excessive wear, and contamination; and
• “Excess” grease is more about the bearing cavity not being able to purge and allow fresh grease to push out old grease.

What is more uncertain is the ambient temperature, any heat entering from the process (via conduction/convection/radiation), the housing design’s ability to transfer heat, and any layer of contamination on the housing that would limit the heat transfer.

Bearing manufacturers do have calculations to predict bearing operating temperatures; however, the confidence that the predicted operating temperature is accurate is moderate at best, as there is little ability to confirm the specific application conditions at the user level.

Some manufacturers provide a “reference speed,” which is the speed at which a bearing will achieve a steady-state temperature of 70 Celsius (160 Fahrenheit). What can we conclude? The bearing manufacturers feel that a normal operating temperature can be 70C. I think a lot of people will think that this is quite hot.

The cage material would be the next consideration, and the concern would only be if there is a polyamide cage, which has a steady-state temperature limitation of 120C (250F).

If the bearing is running at an elevated temperature and all the checks noted are within limits, you must also consider how a higher temperature can affect the lubricant.

Rules of Thumb
> For grease, for every 15C (27F) above 70C (160F), the relubrication frequency should double.
> For an oil bath, as the temperature increases, the more frequently the oil needs to be changed. For example, when the normal operating temperature is 50oC or below, the oil can be changed once a year, but at 100C, the oil will need to be changed every three months.

Absolute vs. Change in Temperature

Discussed so far is what are the “absolute” temperature limits in terms of the components of the bearing system. However, just because the bearing is operating at 80oC does not mean that everything is okay. If the bearing has been operating at 30C since start-up and recently the temperature has bumped up to 80C, then there certainly could be a problem.

Some electronic devices are being used to “alarm” when there is a temperature change. As an example, one device has a preprogrammed alarm of 105C (220F) – there in the alarm. The device can also be set such that it learns the normal operating temperature, then it will alarm when the temperature has elevated by 50C (90F).

What should you do if there is a
change in temperature?

Instead of wondering what temperature the bearing can take, then when there is a change start investigating why. Is there a lack of lubrication? Have the operating conditions changed? Has the rotating assembly gone out of balance? The elevated temperature should initiate further investigation with more in-depth techniques such as vibration analysis. MRO