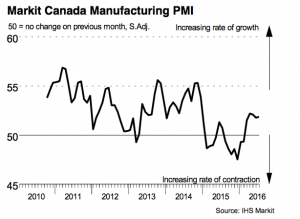 Canadian manufacturers indicated improvement in business conditions during July, underpinned by modest rises in output, new orders and employment levels. However, there were signs of weaker demand from export markets, as highlighted by a renewed drop in new work from abroad. Meanwhile, exchange rate depreciation against the U.S. dollar continued to push up overall input costs in July, with survey respondents citing higher steel prices in particular.

Moderate improvement over June
At 51.9 in July, the seasonally adjusted Markit Canada Manufacturing PMI was up fractionally from 51.8 in June and above the neutral 50.0 value for the fifth consecutive month. This signalled a moderate improvement in overall business conditions, but the latest reading was still weaker than the average since the survey began in October 2010 (52.5).

Employment levels trend up
July data indicated a sustained expansion of manufacturing production levels, which continued the upward trend seen in each month since March. Survey respondents attributed the latest upturn in output to stronger inflows of new work, especially from domestic clients. Measured overall, new work expanded at a moderate pace that was slightly faster than June’s four-month low. However, export sales acted as a drag on total new orders in July, which some firms linked to softer demand from clients in Asia. Reflecting this, new work from abroad decreased for only the second time in 2016 so far, and the rate of contraction was the fastest for nine months.

Payroll numbers increased again in July, which extended the current period of jobs growth to five months. The latest rise in staffing levels was the joint-fastest since December 2014. Survey respondents linked additional staff recruitment to new product launches and efforts to expand into new markets.

In contrast to the positive trend seen for employment levels in July, latest data signalled that purchasing activity was broadly unchanged since the previous month and pre-production stocks increased only fractionally. Moreover, inventories of finished goods were lowered for the fourth month running, which some firms linked to uncertainty about the business outlook.