New generation of Beckhoff TwinSAFE safety controllers based on EL6910 TwinSAFE Logic terminal, make it possible to adapt the TwinSAFE system more specifically to exact requirements of a machine concept as well as to a broader spectrum of programmable safety applications.

Three new I/O modules can be used as controllers for the direct execution of customer-specific safety projects. Like a dedicated controller, the safety project on the corresponding TwinSAFE I/O component can establish direct communication relationships with other safety-relevant devices and pre-process the data internally. 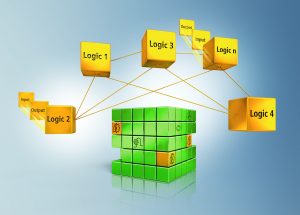 afety projects can be modularly designed in TwinCAT software. However, the new customizing function enables each module to be configured into the following operating modes:
˗ temporary deactivation;
˗ permanent deactivation;
˗ passivation

With the corresponding configuration of replacement values for the interfaces between the different modules, users can implement complex, modular and scalable architectures while reducing development costs.