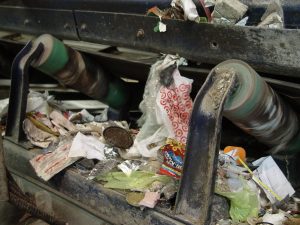 Simon Rouleau is the president and owner of Quebec-based Simar-Dacon, Inc. He designs, and his shop builds, conveyors of all shapes and sizes for different industries. Douglas Froom is the president of Nova Scotia-based BF Consulting. He is a conveyor integrator, advising on what to buy, and obtaining and installing conveyor systems for his clients. He is also a troubleshooter. They shared their expertise with MRO on some conveyor drive issues.

To grease, or not to grease: The chains in sprocket and chain conveyors need grease to extend their working life. But trigger-happy mechanics can damage bearings with their grease guns. For bearings that need greasing – and not all do – mechanics must trust that their grease guns will deliver a shot of grease with just one squeeze. “Consistently, you see squeeze squeeze until you see grease coming out. You’ve just blown the seals out of the bearing. When you put the grease gun on, do one squeeze,” Froom says.

“After you snap the grease gun on the nipple and squeeze, if grease is not coming out around it, then it’s going into the bearing. All the manuals I see – one squeeze is what they recommend. The best I can say is read the owners manual,” Froom advises.

Some bearings are sealed and do not require greasing. Yet, says Rouleau, mechanics come at them with their grease guns and do their worst. “You can put too much pressure on the bearing [when you grease it] and pop out the seal. What I saw at [one plant], the guys put in so much grease, they popped out seals. They didn’t know when to stop. Some guys think they have to grease everything.”

Mechanics should investigate what bearing manufacturers recommend, so they will not damage bearings.

Sometimes bearings do need greasing, but, Froom advises, “Clean environment means less grease. Dirty environment means more grease.” And by rights, old grease should be removed before packing bearings with new grease. To that advice Rouleau adds, “What I’ve also heard is that some people don’t put in the right grease. You contaminate the first grease that was in there.”

Some maintenance departments install automatic greasers – not a bad idea at all, as far as it goes – but, Rouleau reminds us, “There is a risk of forgetting them.”

Chains & sprockets, or synchronous sprockets? Chain and sprocket drive components are inexpensive, and have their place. Take, for example, a long conveyor with boxes moving along it – especially a belt conveyor. “In an application like that, where a chain is running constantly, chains and sprockets are the cheapest way to go. It can transfer a lot of power simply. Everyone in the plant knows how they work. The other thing with a chain drive is versatility. If, in the future you want to make a modification and change the speed, all you do is change the ratio of the sprockets. If you have a shaft-mounted motor, you have to change the gearbox,” Froom says.

But, Froom notes, “Is it going to be start stop, start stop? If so, avoid chain drives. Go to shaft mounted. If [the chain drive] wears a bit, it will tear itself to pieces in no time.” He notes that chains and sprockets represent 50 per cent of BF Consulting’s repair call-outs.

Chain and sprocket tension needs to be maintained to reduce premature wear. What does this wear look like? “I can start to see in the sprocket a bit of flattening in the rounded grooves on the sprockets. When the chain wears (becomes a little longer) the links are too long and are rubbing on the backs of the sprocket grooves. Eventually you will see an opening up of the groove between the teeth, and the tips of the teeth will become sharp instead of being flat. Then, overnight, the tips will grind off and the sprocket will become a wheel. The telltale sign is grey powder down under the belt,” Froom says.

Froom prefers synchronous sprockets, which don’t wear as quickly. Their toothed belts are also better than v-belts, he says. “Some of the really old conveyors use v-belts. In higher-torque applications the belts slip. With the toothed belt this does not happen. The belt is a lot quieter and does not stretch like a chain.” And for belt conveyors, with start-stop action, shaft-mounted motors are even better.

Direct drives: While direct drive conveyors are superior set-ups, clients must know the conveyor speed they need for the required throughput. This is critical information for the conveyor designer.

“If there is one problem with a direct drive, you can’t increase the speed. When you choose your reducer, and you are absolutely sure of the speed you need, you are good to go. You need to design the conveyor for the maximum feed amount, not the mean, or average.”

One of Rouleau’s clients gave him an average feed speed, and later said that he wished the speed was higher. “I wish they had told me that before,” Rouleau says.

Too-small drive components? Are drive components sometimes too small for the job? “Usually conveyor builders won’t make this kind of mistake unless the client gives us the wrong information; for example, asks for 300-tonne, then puts 500 tonnes on it, and starts screaming,” Rouleau notes.

Bearing tidbits: Froom: “Generally, for bearings, they either work or they’re toast. If I see a belt off to one side, jammed, it is usually the bearing. As it wears, the belt will move back, and then start to move to one side. In conjunction, you will see a groove worn in the shaft where the bearing sat. Now you have to replace the shaft.”

Rouleau: “Roller bearings or spherical bearings will last longer than ball bearings. They are used for bigger shafts.”

Froom: “Motor bearings can be damaged if a sprocket is overhung. This is when the sprocket is installed on the motor shaft with the shoulder facing the motor. Try and put the sprocket so it is close to the gearbox,” he says.

To toss or repair bearings: Small bearings are probably cheaper to discard than repair, but for heavy applications, Rouleau chooses split bearings in a pillow block, which allows repairs. “Say, for a big mining conveyor, we will choose a big split bearing. You can open it and change it. It gives more maintenance possibilities. It is cheaper to repair than to replace.”

Line shaft versus DC motors: Froom describes a line shaft conveyor as having long shafts, with spools and belts running from them to sections of conveyors. When product accumulates at the end of a conveyor, and it is stopped, there is a brake on the rollers, but the shaft is still spinning, Froom says. “I liken it to coming up to a stop sign and putting a foot on the gas and brake at the same time.”

One alternative to line shafts are DC motors. Froom paints this little portrait: “Each of the control boards on the 24-volt DC motors can be configured to do what you want. Speed it up, slow it down. Because the controls are usually on board a DC motor, you can eliminate PLCs. You can make the argument that you should spend the 20 per cent more for this kind of conveyor, instead of the line shaft conveyor.”

Tensioners: Belt tension is important, and things can quickly go sideways, figuratively and literally, if there is slippage. For example, in the rain you can get a feedback loop where there is slippage, more material piles up, causing more slippage. “The solution in this case was increasing the tension,” Rouleau notes.

A couple of years ago, Simar-Dacon built some very long conveyors with hydraulic tensioners that pull on the tail pulley. Rouleau prefers them to gravity tensioning. They are only appropriate for conveyors over about 250 feet long, Rouleau says, but when they can be used, they are better. “For me, it is easier to install, cheaper, because there are fewer pulleys, bearings and shafts. With the gravity system, you can’t increase the tension unless you increase the weight on the belt, or add weight to the counterweight. There are also guards, it is up in the air, and not easy access.”

Cleanliness: Conveyors do not appreciate wallowing in the stuff they convey. Regularly clearing away spilled material will eliminate tracking problems caused by, say, dirt accumulating on drum pulleys. One simple solution is permanently-installed scrapers that that keep drums clean.

I showed him a photo of a conveyor in a recycling plant, with junk piled up under the rollers. Rouleau’s analysis: “What will happen in the case of this is that the life of your belt will be reduced a lot. Eventually the roller will get stuck in the material and not roll. I’ve seen where a belt will wear a flat spot on your roller. It becomes a knife edge, and becomes very dangerous. It cuts the belt.”

This article is published in the December 2017 issue of Machinery and Equipment MRO.