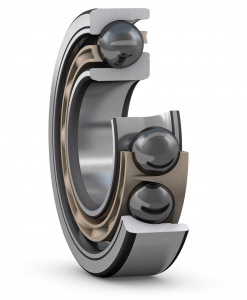 There are many severe applications in the world and some are specialized to certain industries. When it comes to bearings, most companies are split into business units that generally serve three main industries: Aerospace, Automotive and Industrial. There is no question that aerospace applications are the most severe and most demanding, however, industrial applications have a stake in the severe service category, too.

The term “severe service” could mean a lot of things to a lot of people. So, to qualify this, it’s useful to discuss a “bearing design” that has been successful in severe-service applications. In this case, “bearing design” refers to the materials used in the bearings, as opposed to some unique geometry.

There are three key materials that have made a standard bearing geometric design suitable for severe service. Of note, these materials were first introduced and proven in the Aerospace and Automotive (F1 racing) industries prior to the introduction into the industrial market.

Ceramic Balls have been around for a while. By the end of the 1980s they were being commercially promoted. However, the manufacture of ceramic rollers is still not available as mass-produced components. There is still some degree of manufacturing development required. Ceramic rolling elements have several advantages but the most important one (in terms of severe service) is the ability to operate under marginal lubrication conditions. So, when the “severe environment” degrades or prevents the lubricant from doing its job, the ceramic rolling elements can cope with the poor conditions (better then standard bearing steel).

HNCR stainless steel offers greater material “cleanliness” than standard bearings steels, with almost no presence of sulfides, aluminates, silicates or globular oxides. The absence of these non-metallic contaminants contributes to extended bearing service life, as does the extremely homogeneous structure. They are very resistant to aggressive media.

PEEK as a cage material is relatively new. PEEK is a semi crystalline thermoplastic with excellent mechanical and chemical resistance properties that are retained to high temperatures.

Where are they used?
In sour gas compressors, a standard compressor (often refrigeration units) is typically used. With sour gas, the H2S (the gas that makes natural gas “sour”), condenses in the compressor and contaminates the lubricating oil and forms sulfuric acid, which then corrodes the bearing.

The bearing would soon fail and the compressor would have to be rebuilt. For one user, a shutdown of the compressor meant significant environmental penalties due to flaring the sour gas while the compressor repairs were undertaken.

The bearings were significantly more expensive than the standard, however the run time between failures stretched from months to years saving the user millions of dollars in avoidance of penalties.

The idea has since caught on within the industry and is being used in field compressor stations that are remote, unmanned and where the ability to get to the compressor and change it out can take some time. The cost of reliability (or lack of) can be high. The use of sour service bearings has become standard for certain compressor suppliers and users in the oil and gas industry in Alberta.

The same technology has been expanded into the food and beverage industry. Food and beverage industry regulations are placing ever-greater demands on the production of safe food. To meet these regulations, plus the requirements of food safety management systems, such as Hazard Analysis & Critical Control Points (HACCP), the industry is applying new bearing technologies. Technologies that require frequent washdowns and resistance to chemicals used for sanitation. Using the HNCR steel fulfils these requirements.

A large petrochemical plant in Western Europe was experiencing bearing failures in its cryogenic pumps. The high RPM pumps were submerged in and used to pump    –100 °C liquid ethylene through start-stop cycles, 24/7. Poor lubrication was causing severe damage to bearing components, leading inevitably to failure.

The solution featured a bearing constructed with HNCR, deep groove ball bearings with low friction ceramic rolling elements, and a single piece, glass fibre reinforced PEEK cage. After more than two years in service, which included regular vibration monitoring performed by plant staff, the cryogenic pump solution bearings were still performing well, with no signs of damage. The plant is expected to achieve a 428 per cent return on investment for each installation of the severe service solution after the first year.

Some may say that they heard of this technology 10 or 20 years ago, however, back then it was used in unique applications, such as the space shuttle. Today, these bearings are not so far out of reach and specific sizes are manufactured for known applications and industries.

What’s Up Doug? appears in every issue of Machinery and Equipment MRO.

Contributor Douglas Martin is a heavy-duty machinery engineer based in Vancouver. He specializes in the design of rotating equipment, failure analysis and lubrication. Reach him by email at mro.whats.up.doug@gmail.com.