The rotors in rotating machines are supported through anti-friction ball or roller bearings in many cases. Fault in such bearings always develop during machine operation and their early detection is important so that remedial and maintenance action can be taken to not only maintain plant safety, production and reduce maintenance overhead, but also to avoid any catastrophic failure.

The probability of the anti-friction bearings failure is generally high in machines and vibration-based condition monitoring (VCM) is a well-known technique and an accepted practice for detecting problems. Commonly used vibration-based techniques for the detection of fault in anti-friction bearings are the crest factor, kurtosis, shock-pulse and the envelope analysis of the vibration acceleration response measured on the bearing housing. There are a number of modern instruments commercially available to meet these requirements.

Even with these advancements, the question still arises whether VCM alone in a machine is enough?

Blame it on the way these methods have been developed, but they don’t have enough insight to address the potential root cause for such frequent failure. These methods are important for tracking the health of the bearings and the machine overall on a regular basis, however, considering the plant objectives and requirements, these methods alone can’t guarantee low maintenance overhead and machine availability to enhance the production. For such cases, the dynamic behaviour of the complete machine unit comprising the rotor, bearings and foundation (including auxiliary structural components, piping, etc.) is responsible for such premature and frequent failure. Therefore, it is essential to understand the machine’s dynamic behaviour during the normal operation and by conducting additional in-situ vibration experiments on machines to identify the root causes for such frequent failures.

Below, a truncated version of a case study co-authored with A.R. Rao, demonstrates how to solve the premature and frequent failure of bearings in a centrifugal pump. The study was first published in Structural Health Monitoring: An International Journal in 2006.

Figure 1 shows a schematic of the pump assembly that belongs to a centrifugal pump commissioned in 1985. It is a horizontally mounted centrifugal pump with the axial inlet, and the radial outlet. The pump and the motor shafts are rigidly coupled to a shaft carrying a flywheel. The flywheel is supported by a grease-lubricated radial bearing on the pump side and oil-lubricated taper roller thrust bearing on the other side. The pump is driven by a 540kW electric motor operating at 1492RPM. The pump is mounted directly on the base plates embedded to the rigid concrete floor.

The pump had no failure until 1990, when it developed a history of anti-friction bearing failure. Failure becames frequent after 2004. A typical photograph of a failed bearing is shown in Figure 2. Here again, the fault in the bearings was detected by the kurtosis and the envelope analysis of the measured vibration responses on the bearing pedestals. This information has always been utilized to replace the faulty bearings in well-planned shutdowns before any major failure occurred.

Vibration diagnosis used
In-situ modal tests were conducted on the pump assembly as an additional test. An instrumented hammer was used to give the impulse excitations to the pump assembly and the responses of the assembly from different locations and in different directions (the vertical, the axial along shaft axis, and the lateral to shaft axis) were collected from a number of accelerometers. The measurement locations are also shown in Figure 1. 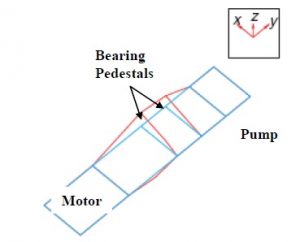 Figure 3: Mode shape of the pump assembly showing deflection at bearing pedestals only

A better tool
VCM is a useful tool to identify the early fault in any machine so that the planned maintenance work can be done before any catastrophic failure occurs. Often the routine VCM and the bearing fault indicators failed to find the root cause of the failure, which generally end up in just rectifying or replacing the faulty bearings. In-situ additional vibration tests are likely to provide more insight of the machine’s dynamic behaviour and therefore offer a better solution to the vibration problems. Once the root cause of the problem is identified, the appropriate remedy can be done to avoid the repeated failure. It will not only increase the availability of machines, but also downsize the maintenance overhead and enhance the plant safety.

This article is published in the April 2016 issue of Machinery and Equipment MRO magazine.