Valve plant gains understanding of Industry 4.0 by becoming a reference factory for customers 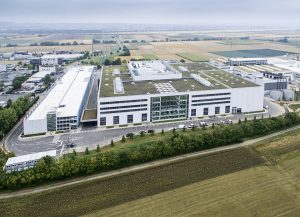 Festo is applying new technologies and systems in a planned strategy to showcase its own machines and products as they are being used to build, yes, its own machines and products. It’s all under the umbrella of a strategy called Industry 4.0, which the company sees as its opportunity to remain competitive on a global scale, according to Dr. Eberhard Veit, Chairman of the Management Board of Festo AG & Co. KG, Esslingen, Germany.

Industry 4.0 is about industrial digitalization, which is the key to networked, flexible production in the future. “It makes the whole world one marketplace,” said Dr. Veit.

Speaking to an international group of senior magazine editors at Festo’s 14th International Press Conference in December 2015, Dr. Veit noted that the key elements of industrial digitalization are the individual components that communicate with each other within an overall system and that can control and regulate themselves. Festo is using such technology at its newly revamped factory in Ostfildern-Scharnhausen, near Stuttgart, Germany.

In Europe, a close co-operation between the industrial associations and the spheres of industry and politics is ensured by “Plattform Industrie 4.0,” a consortium established to create a basis for a uniform understanding of the concept of Industry 4.0. Technological standards are being developed, along with business models and new forms of co-operation that will strengthen the global competitiveness of industry.

“In interdisciplinary groups, the participants in “Plattform Industrie 4.0” are carrying out intensive work on the future topics of standardization, research and safety, but also regarding aspects of new working worlds and training,” explained Dr. Veit. “We are talking here about the transformation of industrial manufacture into a fully networked, flexible production system. To remain competitive, we must take the initiative with our characteristic spirit of inventiveness and give shape to this new development.”

“Digital refinement will give rise to increasingly intelligent products,” said Dr. Claus Jessen, Board Member, Product Supply at Festo. “In the future, the individual elements of an overall system will be able to communicate with each other and autonomously control and regulate themselves. They are the core of industrial digitalization and support the production process through enhanced functionality – from self-sufficient energy supply up to condition monitoring.”

Festo is working in close collaboration with its customers – it has 300,000 worldwide – to develop new concepts and business models – from the development of communication-capable components to their integration into modern automation environments.

Festo is relying on Industry 4.0 not only for its products, but also for its own production processes. Pilot projects have already been initiated at the new Scharnhausen Technology Plant. By putting new, relevant technologies into practice, the company is able to keep abreast of developments in the industry.

The tasks of the human employee are also changing from merely operating machines to solving complex problems, said Dr. Veit. “In shaping the production of the future, Festo is strategically concentrating on a triad comprising new technologies, state-of-the-art training and further education, and the human at the focus of attention.”

The completely revamped Scharnhausen factory, which is Festo’s main production plant for valves, valve terminals and electronics, opened in September 2015 and employs 1,200. “We wanted it to be a reference factory for our customers,” said Stefan Schwerdtle, Head of Global Production Centre, Scharnhausen.

The human operator is and will remain the key element of modern production, but will be assigned more and more new tasks, said Dr. Jessen. “The role of the human within the industrial value creation process is now being transferred from that of a machinery operator to a problem-solver. New requirements will arise, for which employees will be prepared by means of appropriate education and training measures. To an increasing extent, education is becoming the key success factor,” he explained.

Employee learning plays a central role at the Scharnhausen Technology Plant. “We have integrated a Learning Factory into our plant, where we can convey teaching content in a practical way, directly on location,” said Dr. Jessen. “We believe learning is a continuous process.”

Courses are designed around the KISS principal, said Klaus Zimmermann, Head of Sales Region Germany Training and Consulting, Festo Didactic. “Keep it short and simple.” Many courses are simply one-point lessons, he said. They range from 10-20 minutes to a maximum of two days. The topics can be as basic as how to use tools, how to save energy, or how to assemble a product.

“Every one of us in the factory is a customer and has a customer,” said Festo’s Stefan Labonde, head of materials management. The materials management team (which also manages equipment maintenance) meets every morning “to plan the perfect day.” Maintenance is a proactive function. A big part of the job is to reduce bottlenecks in production, he added.

“Our objective is to have the maximum availability of [production] machines,” said Florian Fuch, who works in the factory’s maintenance department. Maintenance employees carry tablet computers that show faults and can display the status and history of all production machines.

“We function as mobile maintenance specialists,” said Fuch. Maintenance goes to the problem, gets information from the operators, checks the availability of spare parts if needed and can access detailed instructions on the tablets. If there’s a tough problem, photographs can be sent directly to the machine’s manufacturer for troubleshooting assistance.

To make the work experience more comfortable for employees, the lighting in the factory shifts colour throughout each day. “It’s more blue in the morning, and more red later – just like real daylight,” said production worker Annette Ostertag.

The plant also offers four colourful creative rooms for ‘Ideenschmiede’ (roughly, idea smithing). They are equipped with computers, electronic whiteboards, comfortable seating – and coffee. The rooms are designed to foster a creative culture for those working on projects. “Employees can use them their own way to find new ideas,” said Zimmermann. “The rooms allow them to see things they have not seen before.”

For anyone visiting the Scharnhausen factory, it’s definitely an experience in seeing things not seen before. It’s on the leading edge of future technology for production, condition monitoring and education, and Festo’s open-door attitude means many others will be able to learn from its advances.

Bill Roebuck was the editor of Machinery & Equipment MRO from 1985 to 2015. He can be reached at broebuck@sympatico.ca.