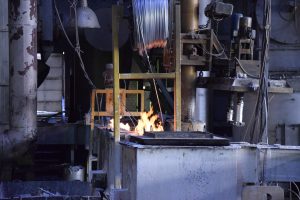 Canada’s aluminum and steel trade hangs in the balance.

The eighth round of negotiations is in the offing and an agreement has yet to be reached on the renewal of the North American Free Trade Agreement.

To date, a call for protectionism south of the border, specifically led by President Donald Trump’s insistence that the 24-year-old free trade deal has been unfair to the United States, has unleashed a political battle of wills on trade goals.

Trade talks are centred on U.S. demands that range from changes to automotive content origin rules and dispute resolution mechanisms, to imposing a clause that could automatically kill NAFTA after five years.

Meanwhile, the U.S. president’s imposition of a 25 per cent tariff on steel imports and 10 per cent tariff on aluminum imports, enacted under section 232 of the little used Trade Expansion Act of 1962, exempt both metals coming from Canada and Mexico on national security grounds – for now.

“We’re going to hold off the tariff on those two countries to see whether we can make the deal on NAFTA,” said the U.S. president at a signing ceremony of two proclamations that take aim at the two metals.

Canada’s largest private sector union, Unifor, said the exclusion of tariffs on Canadian steel and aluminum exports to the U.S. is simply a “stay of execution.”

Ontario is a major supplier of steel and automobiles to the U.S., while Quebec is a key supplier of aluminum. Canada exported $24.1 billion-worth of steel and aluminum to the U.S. in 2017, with the bulk of Quebec’s exports concentrated on aluminum, according to an analysis from BMO Capital Markets.

Tariffs against Canada will also hurt the U.S. auto industry and result in higher costs for consumers on both sides of the border, warned Unifor, which represents 40,000 workers in the auto industry and thousands more in the steel and aluminum sectors (including 1,000 at Rio Tinto in British Columbia and 3,000 aluminum workers in Quebec.)

Business leaders on both sides of the border have sounded the alarm about the risks involved in a fall-out. Count among decriers 107 House Republicans who urged the U.S. president to “reconsider the idea of broad tariffs to avoid unintended negative consequences to the U.S. economy and its workers.”

Trade experts argue that Trump is taking aim at the wrong target and that he is inviting a conflict that will serve no one. The Aluminium Association of Canada fired off its missive, stating that Canada has helped maintain U.S. supplies without taking advantage of the U.S. decline in production. The AAC points instead to China for an overcapacity in the aluminum sector, reporting that it produces 54 per cent of the world’s primary aluminum and 53 per cent of the fabricated aluminum, and that China’s costs, partly subsidized, led to a “spiral of closures.” The United States are exposing their economy to “serious adverse effects that are greater than the expected gains,” noted Jean Simard, president and CEO of the AAC.

Ongoing talks and the Canadian government’s continued non-confrontational posture are signals that we want a deal. But President Trump’s tariff exemption is hardly a gift horse and there’s no telling whether an all-out trade furor between the U.S. and its top strategic allies will ensue. If the ill-fated direction toward trade tariffs for Canadian steel and aluminum is forged, retaliation will be necessary.

Still, Roberto Azevedo, director-general of the World Trade Organization provided a sobering statement: “Once we start down this path it will be very difficult to reverse direction. An eye for an eye will leave us all blind and the world in a deep recession.”