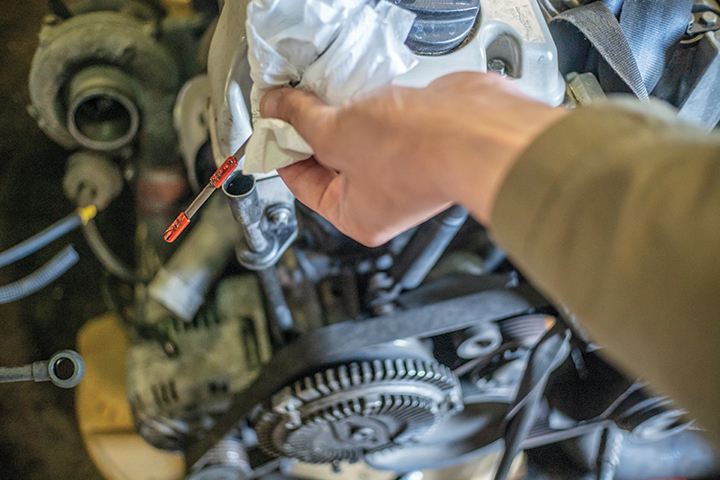 Monitoring equipment condition has been around since man created the wheel. When the wheel squeaked and the wheel hub began to burn, man learned to grease the wheel with tallow. As the application of the tallow became more precise, the mean time between potential failures of the wheel was extended, and the concept of preventive maintenance was established using the senses of sound, sight, touch, and smell.

Sensory perceptions; however, are subjective and imprecise, and condition-monitoring techniques using common tools have been developed and applied for industrial equipment. Substantial evidence exists that the intelligent use of common testing and measuring techniques may provide as many benefits as the use of costly technologies.

By definition, the use of any testing and measurement tool requires that data be collected on an on-going basis. To establish repeatable trend data using common tools, the data must be obtained at regular scheduled intervals, gathered when equipment is at operating temperature and taken at the same point on the machine component each time it is collected. These test and measurement techniques are common, easily applied, and only require that operations and maintenance personnel have a sound knowledge and understanding of their equipment and its operation.

How would you determine the condition of lubricant without an analysis?
Logic: Common oil analysis techniques such as spectroscopy and particle counts can measure wear rates and contaminant levels respectively, but common sense suggests that simple on-site tests can be very cost effective. If an operator suspect’s contamination, a sample of oil can be obtained in a glass jar, which is then allowed to sit overnight. When the jar is turned over, any contaminant will remain visible on the bottom surface of the jar. A decision can then be made if further laboratory testing is required. Water contamination in the lubricant can also be determined very quickly by placing a few drops of used oil on a hot plate. If the oil drops crackle or sizzle, there is excessive water present.

How can you determine the effectiveness of oil filters?
Logic: Every time an oil filter is replaced, the old filter should be cut open, the filter media spread on a bench and using a magnifying glass or microscope, contaminants and wear metals will be obvious.
Further testing can be applied by placing a magnet under the filter media. All ferrous materials will move on the surface of the filter media as the magnet is moved. If machine damage is suspected, or the level of contaminant or wear metals has increased since the last filter inspection, an oil analysis should be carried out immediately.

Rolling element bearings – 71ºC (160ºF), this is the temperature at which lubricating oil or grease begins to oxidize.

Hydraulic systems – Bulk oil temperature at the exterior of the reservoir should not exceed 60ºC (140ºF).

V-belts – Should not operate at temperatures higher than 60ºC (140ºF) and should only be covered by a wire mesh safety shroud to ensure airflow.

Electric motors – There are four classes of motor winding insulation, with a corresponding maximum temperature rating.

The temperatures listed include combined ambient temperature and temperature rise. For every 10ºC increase in temperature above the rating, the service life of that particular motor is reduced by 50 per cent. Various studies suggest that 40 per cent of all electric motor problems are directly caused by excessive heat. Common and inexpensive methods of testing temperature conditions include the use of infrared thermometers and digital temperature indicators. The actual operating temperature of internal components will be about 20ºC higher than the
recorded temperature.

How do you monitor equipment conditions such as fluid leaks, steam trap leakage, rotating bearing condition, electrical system arcing, corona discharge, or determine how much grease is required in a bearing without sophisticated equipment?
Logic: these conditions are common in machines of all types and a common inexpensive tool that can be used to monitor these problems is a hand held acoustic ultrasonic device that can easily determine if these problems exist.

How can you determine if a rotating machine has a vibration without the use of a sophisticated vibration analysis device?
Logic: every piece of equipment contains moving parts causing potential sources of vibration such as unbalance, misalignment, bent shafts, defective bearings or gears, mechanical looseness, and electrically induced problems. There are simple devices available today that can be used to determine if a vibration exists within a piece of rotating equipment. They include the following test and measurement tools.

• Stroboscope – can be used to determine the vibration phase and is a useful tool when measuring unbalance and its correction.

• Shock pulse measurement – devices emit shock pulses pressure waves generated in the contact zone between the ball or roller and raceways in bearings. Shock pulses are measured on a decibel scale and compared with severity against the ISO Standard 2372 that provides vibration tolerance limits.

• Vibration pen – can be used to assess rotating machine condition in the 600–12,000 RPM range. The device measures vibration severity in either (mm/s), RMS or (in/s) peak. The vibration severity can then be compared to ISO Standard 3945.

• Marlin condition detector – a handheld device that can be used to gather velocity and acceleration vibration data, as well as temperature monitoring for all types of rotating equipment. It can incorporate bar-coding, oil analysis data, and can be used with many of the common computerized maintenance management programs available today.

• Video probe borescope – is a handheld device that can be used to obtain 3D scans of internal components of any machine, allowing inspectors to visualize the shape and characteristics of
areas of wear, including the depth of the wear or pitted condition of component surfaces.

This article only scratched the surface in describing the many inexpensive testing and measurement devices and simple methods that can be applied to increase equipment productivity
and reliability. MRO