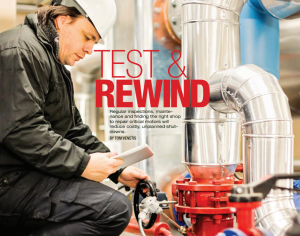 An unplanned shutdown on a production line due to a faulty or failed motor is something to be avoided at all costs. Shutdowns are costly, both in regards to lost profits and to a company’s reputation amongst its customers who are now left waiting for their goods.

That is why knowing what causes motors to fail, how to prevent failure and what goes into maintaining and repairing a motor is so important.

Inspect and maintain
All motors, no matter how robust and rugged, will over time need to be inspected, maintained and repaired. So, let’s review a few simple measures that can help prevent a costly breakdown of a motor in an industrial operation.

The first is to develop a preventive maintenance plan. That might involve scheduling regular inspections and maintenance routines for motors. Depending on how critical a motor is for the operation in a company, those inspections and maintenance routines can be very frequent, sometimes monthly or weekly. Remember, if a motor is critical for an operation, such as moving key conveyors or assembly systems, then frequent inspections are critical. Heavy-duty motors involved in operations that put motors under high amounts of strain might need to be inspected daily.

Next, assign a regular team to inspect and maintain the motors. These will likely be persons who work with the motors all the time and can spot problems quickly because they are familiar with the motors.

Tom May, shop manager with Trade-Mark Industrial Inc., Cambridge, Ont., a contractor that offers electric motor testing and rewinding services for both AC and DC industrial motors, says most motor issues today come from daily wear and tear. “Common mechanical issues are those around bearings, pulleys and sprockets on a shaft coming loose. The environment where that motor is operating plays a role in it operating life. You will see that in punch-press and stamping applications, oil-laden mists entering the motor and allowing carbon from the brushes to get into places where it should not be getting into. That is going to cause problems such as grounding of the armature and winding failures.

Keep in mind that lubrication needs to be checked regularly. If motors have oil reserves, these need to be checked to make sure they are topped off. What is important to keep in mind is not to over lubricate as any excess lubricant can inadvertently get into windings and damage insulation.

Bearings and bearing assemblies need to be inspected as well. This is critical, because the most common cause of failure in a motor are worn bearings. Some bearing wear is simple wear and tear over time. To use a vehicle analogy, think about the bearing on a vehicle’s wheel assembly. Over time and many tens-of-thousands of kilometres of driving, those bearings need to be replaced. The same goes for the bearings in industrial motors. Problems with motor bearings can come from improper lubrication, a misalignment of the motor with the load, mistakenly replacing the bearing and assembly with one that is not rated for the motor, putting an excessive load on the motor and the motor operating in harsh environments.

“Technology has allowed us today to become much more predictive when it comes to maintenance,” May adds. “Through vibration analysis we can trend the failure of a bearing. We can see deterioration in the quality of the bearing and that will tell us if the bearing is driving towards a failure. Simply, vibration analysis is the primary method of keeping an eye on the health of your motor.”

Along with vibration analysis, a heat analysis can also be done to check the surface temperature of bearings and the bearing assembly. If the bearings and assembly are showing excessive heat, then that is likely indicative of a problem.

Jeff Collins, vice-president of Renown Electric Motors and Repair Inc., Concord, Ont., says that 50 per cent of motor failures are bearing related, “and that from such simple things as misalignments, grease levels or not maintaining proper temperatures. These are most of the root causes of bearing failure.”

However, Collins points out that another major cause of bearing failure, one that he has seen more often, comes from the use of Variable Frequency Drives or VFDs.

VFDs were developed to provide greater control for electric induction motors used in industrial and commercial applications. The advantages are greater torque and motor speed control, improved energy savings as the motors can be operated at more precise speeds while maintaining torque, and allows for computer-assisted operation of the motor, which then allows the motor to be used more efficiently in production environments to increase productivity.

What is crucial to understand about VFDs is that when a VFD is operating a motor, the power to the motor from the VFD is never as smooth as a sign wave seen on an oscilloscope, but is instead a series of pulses, switching rapidly between zero, positive and negative. If looked at on a scope, the pulses will look like a series of square waves. This is an indication that the voltage can arc through bearings to create an electrical discharge machining or EDM. Think of an EDM as a kind of lightning storm happening around the bearings. This causes pitting to happen on the bearings as that EDM produces quick melting and cooling of the surfaces of the bearings.

“The current that comes off the drive then goes through the bearing in the motor and causes the bearing damage,” says Collins. “People will see that damage as a kind of frosting or fluting in a bearing. And that [fluting] erodes the bearing very quickly, sometimes as soon as in a month or two. So, where bearings were once lasting a long time and where you were maintaining your grease levels, maintaining proper alignment and good temperatures, you are now experiencing this bearing failure.”

Repair shop criteria
When a motor does fail, and needs to be sent to a shop, Collins says that it is important that one chooses the right shop for that work. You need to make sure that the shop is equipped to handle your kinds of motors and has the equipment needed for the work. “If motors are critical to your business, it is recommended that you go and meet the people at the shop who will do the work and review their equipment prior to doing business with them.”

Most motor maintenance and repair shops now follow a set of comprehensive procedures to test and repair a motor.

Trade-Mark Industrial’s May outlines some of what would happen to an AC motor that comes into his facility. First there is a visual inspection and preliminary tests done to check the motor’s windings, such as a No-Load test. Other tests would include ground and phase tests to test the integrity of the insulation and the insulation between the phases, as well as surge tests to see if the insulation has been compromised in any significant way.

Renown Electric’s Collins says that other tests on motors include testing for shaft integrity, phase balance and running the motor to test if the motor is attaining the appropriate speed and drawing the correct amount of current. Another is examining the grease so see if it has blackened. Blackened grease can be suggestive of an electrical issue with the motor. Other tests might include a thermal imaging of the motor to see if there are unusual hotspots inside the motor, as well as winding tests. If rewinding is needed, it is important to use the correct wiring that is rated for the motor.

Most shops have adopted advanced tracking mechanisms, assigning motors that come in for inspection and work unique tracking numbers and using that tracking number to electronically track each inspection, repair and replaced part. This creates a detailed history of the work done on the motor and helps in tracing problems that may appear in the future.

Consider the options
“Once you have identified a problem, then it is a matter of options,” says May. “Options can include repair of the problem, rewinding the motor or replacing the motor. Sometimes the labour cost of unwinding the motors and the labour costs of rewinding the motor can exceed the cost of the motor. It also means that a replacement can be a viable option. The other thing to look at is to see if the motor is a standard motor or is it a special motor, something built specifically for an industrial machine that it is to be powering. An OEM motor can be more expensive than a standard motor, so you might need to look at what the cost is of a replacement as compared to the cost involved in repairing the motor.”

This article was originally published under the title, “Test & Rewind,” in the January/February 2017 issue of Machinery and Equipment MRO magazine.

Tom Venetis is a Toronto-based freelance writer. Reach him at venetis@rogers.com.