Should I Fret About Fretting Corrosion? 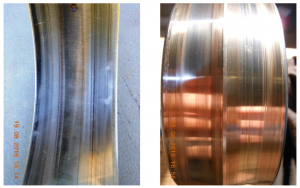 First, what is fretting corrosion? It is defined in ISO 15243: “fretting corrosion occurs in fit interfaces that are transmitting loads under oscillating contact surface micro movement. Surface asperities oxidize and are rubbed off and vice versa; a powdery rust (iron oxide) develops. The bearing surface becomes shiny or a discoloured blackish red.”

The first thing that this reveal is that there must be two factors: contact between two surfaces, and micro-movement between those two surfaces.

Assuming that we have a typical bearing arrangement in which the shaft is rotating, the load is radially directed and is stationary (as in not rotating). In this arrangement, typically, the inner ring of the bearing is tight fitted to the shaft and the outer ring is loose fit in the housing.

In inner ring side, faces are likely in contact with a shoulder on one side and a locknut and/or washer on the other.

By observing the contact (indicated by fretting corrosion) one can then understand the following:

• Which direction the load was applied to the bearing (both in the axial and radial direction).
• From this, one can identify a load in either in the expected direction or the unexpected direction.
• One can also identify if there is an unexpected rotating load.
• The degree of fit between the ring and its seat.
• Was it tight enough?
• Were there any pinch points? 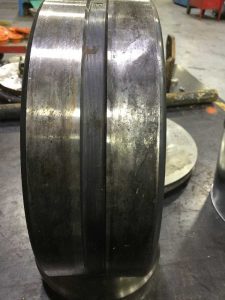 “Light” fretting corrosion looks like a black stain on the surfaces that were in contact. From observing its span across the contact surface and the arc that it covers, conclusions can be drawn as to the degree of fit that was achieved (vs. load magnitude), quality of contact that transmitted, load, and load zone of the bearing.

“Heavy” fretting corrosion is heavy black and sometimes red. It is troublesome as it can indicate excessive movement between surfaces. This is most often seen on the outer ring surfaces, mostly the OD surface, but also the side faces that are taking axial load.

When we see heavy fretting corrosion on a bearing OD surface, it suggests that there was some force driving motion between the bearing and the bearing seat in the housing. This driving force is most often a rotating radial load from an outof-balance condition but also mechanical vibration from the machine itself due to some condition. “Heavy” fretting corrosion can tell us that there is a mechanical issue that could lead to bearing failure or failure of some other component. 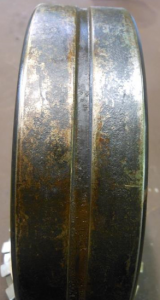 So, Should You Fret Over Fretting Corrosion?
By observing the patterns of light fretting corrosion one can assess the fit between used shaft and bearing and how the load was passing through the outer ring. You can gain insight into the operation of the bearing that has been removed from service.

If you see heavy fretting corrosion, you may fret as the bearing is saying that something could very well be going wrong with your machine. A bearing change is not going to fix it; you need to look for a mechanical issue such as an unbalance condition or some other vibration-creating condition. It can also show that there is poor contact in the mating surfaces such as an undersized shaft or an out-of-round housing.

Therefore, pay attention to fretting corrosion. It can tell you a lot of what is going on with the machine.