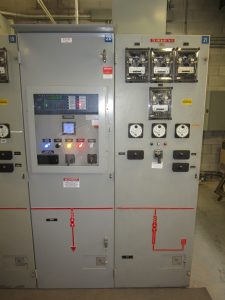 An existing 4160V switchgear section was upgraded with a roll-in replacement vacuum circuit breaker, by Commercial Switchgear Ltd. The original switchgear line-up dated back to the early 1970s and original sections can be seen, adjacent to the upgraded section.

Aging electrical power distribution systems often contain legacy switchgear that have reached end-of-life conditions. Preventative maintenance shutdowns can prove difficult and cause concern about not being able to reclose circuit breakers and restore power when the shutdown is complete. With continued operation, legacy switchgear face the risk of unexpected equipment failure, the inability to readily source replacement parts (or circuit breakers) and the potential downtime associated with a prolonged power outage. Facility managers face the difficult task of upgrading end-of-life equipment that provide power to their site. Since extended downtime can result in unacceptable lost production costs, the typical approach to replacing electrical equipment involves constructing a new service space, installing replacement equipment in the new service space and having short-duration, isolated shutdowns when existing services are transferred to the new infrastructure.

This approach can result in a capital-intensive project, which may require additional time for permitting and construction. Budgetary and schedule constraints may necessitate a more expedient means to improve switchgear reliability. Roll-in replacement circuit breakers and circuit breaker retrofit kits provide facility managers with options for upgrading legacy switchgear, while minimizing costs and downtime. 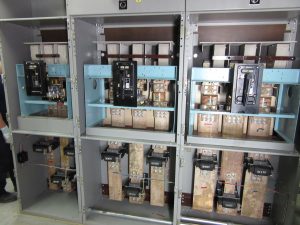 Existing 208V Federal Pioneer Fusematic Switchgear, dating back to the early 1970s, is undergoing on-site refurbishment. The switchgear has been de-energized and the front doors have been removed.

Roll-in replacement circuit breakers are available for both medium-voltage (5kV-15kV) and low-voltage (208V-600V) systems and consist of a new circuit breaker that can be directly inserted into an existing switchgear cell. Retrofit products are available from a number of switchgear manufacturers and can be used with legacy equipment, from different eras and varying original equipment manufacturers. For medium-voltage applications, upgrades typically involve replacing the cell’s outer door (in front of the vacuum circuit breaker), replacing the protective relay for the circuit and may involve replacing instrument transformers (current transformers and/or potential transformers) and associated wiring. Low-voltage applications can involve more in-depth modifications to a switchgear cell, with the installation of a replacement cradle for the new air-circuit breaker and bus modifications to facilitate the cradle installation. Depending on the scope of the upgrades, a shutdown to facilitate a roll-in replacement type upgrade can be expected to involve a 12-hour shutdown, which may be further extended if modifications to bus work are required. 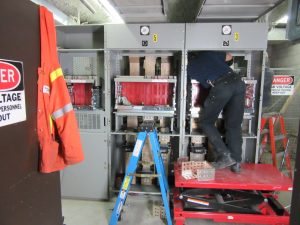 Refurbishment of the 208V switchgear is in progress. Bus modifications have been machined and cradles for the replacement air circuit breakers have been installed.

The first project was a capital-intensive upgrade that involved replacing existing standby diesel generators, and 4,160V automatic transfer and distribution switchgear in its entirety. Upstream 4160V distribution switchgear provided a utility power source to the new automatic transfer switchgear. Given space constraints and project funding limitations, the 23-section lineup of 4,160V utility power switchgear, which was of the same vintage as the emergency power switchgear that was being replaced, could not be upgraded in its entirety. In order to facilitate comprehensive renewal of the emergency power system, two roll-in replacement circuit breakers were utilized to upgrade the sections that provided the utility power feeds to the system. 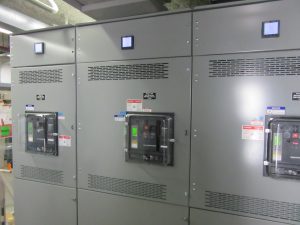 The second project involved replacing a three-section, 208V service entrance switchgear, which had reached end-of-life conditions and could not be properly maintained, due to issues with reclosing the existing Fusematic switches. Given space limitations in the facility and complexities that would be involved with re-routing the incoming 208V Toronto Hydro service to a new location, air circuit breaker retrofit kits were utilized to modernize the existing switchgear lineup in its entirety. All intrusive work was completed over the course of a 20-hour shutdown on Boxing Day, when the facility was undergoing a planned operational shutdown. Schneider Electric’s service group performed the retrofit project and three crews worked in tandem on each section of switchgear for the duration of the shutdown. A mobile workshop was parked onsite to support the retrofit project and to machine custom modifications for the copper busbars. After work within the switchgear was completed, the refurbished switchgear was commissioned and re-energized at the end of the shutdown.

Utilizing roll-in replacement circuit breakers for a switchgear retrofit project can provide opportunities for system improvements and several design factors should be considered. Maximizing physical renewal of internal switchgear components should be a priority, with attention given to instrument transformers, control wiring and bus insulators. The switchgear enclosure should be reviewed for potential improvements, including replacing outer doors, adding driphoods, gasketting, other sprinklerproofing provisions and updating the mimic bus on the front of the lineup. Protective relays should be upgraded, by replacing older-style electromechanical relays with microprocessor-based protective relays. A short-circuit protection and co-ordination study for the facility should be performed to ensure adequate protection and circuit breaker co-ordination exist within the system. Additional protective relay settings should be reviewed for special equipment and loads (such as transformer and motor protection). Operational improvements can also be easily achieved, including adding infrared inspection windows to improve ease of access for thermal scanning, adding power quality metering to record data on electrical system characteristics, especially where future load growth is a consideration, and ensuring a portable lifting crane and racking handles are provided for future circuit breaker removal and preventative maintenance.

Reclaim uptime
Upgrading electrical switchgear with roll-in replacement circuit breakers and retrofit kits is an expedient and cost-effective means of refurbishing equipment that have reached end-of-life status. Facility managers have the option to extend equipment life, while planning and budgeting for their next capital-intensive upgrade project. A refurbishment project can further improve system reliability, maintainability and operability, by including features that address limitations with an existing installation. Undertaking a refurbishment project should begin with detailed site reviews, and preparation of engineered drawings and specifications for the upgrade. Having a detailed engineered design in place will ensure that the selected vendor provides products in accordance with the specified requirements, site work accounts for the operational constraints of the facility and a successful outcome is achieved.

This article was originally published under the title, “Power Play,” in the January/February 2017 issue of Machinery and Equipment MRO magazine.

Philip Chow, P.Eng., P.E. is a senior project manager and electrical engineer at H.H. Angus & Associates Ltd. Consulting Engineers. He specializes in electrical solutions for critical applications and can be reached at Philip.Chow@hhangus.com .