Rewinding and repairing large magnets is one of the specialties at Electro Motors Co. Ltd. Its team of skilled people is trained not only to rewind/repair to the original manufacturer’s specifications, but also to identify the reason for... 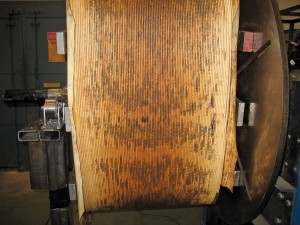 The first layer of turns on the coil is shown. Photo: Electro Motors Co. Ltd.

Rewinding and repairing large magnets is one of the specialties at Electro Motors Co. Ltd. Its team of skilled people is trained not only to rewind/repair to the original manufacturer’s specifications, but also to identify the reason for failure and make improvements where needed to prolong the life of the motors, generators and magnets it rebuilds.

A few years ago, we were approached by a large company asking us if we could quote on the rewinding of the coil of a 10,000-lb. magnet. They told us they had four magnets and all of them had failed a few times in the past 10 years. We quoted and our price was acceptable to them, but since the magnet was already at another rewind shop, they decided to let it do the rewinding and told us that if they had another magnet failure in the future, they would contact us.

This year, another magnet that was rewound only a few years ago failed, and they shipped it to us to rewind. We removed the coil and set it up on our large coil winder to unwind and count the number of turns.

This same pattern repeated itself up to the end of the large coil. We learned that the manufacturer of the magnet recommended the use of high-temperature varnish for every third layer of turns, and every time a coil failed in the past, the various shops that rewound them brushed a coat of varnish on every third layer as suggested in the manufacturer’s instructions, and then baked the completed coil to cure the varnish.

The coil was wound with aluminum wire wrapped with 0.0025-in. Nomex paper, half of it overlapping. The temperature rating of the coil was 150°C. At that high temperature, the aluminum wire needed to expand, but every third layer of turns was prevented from expanding because the cured/hardened varnish created a high bond between turns, which damaged the Nomex paper insulation wrapped around the wire.

We made the improvements necessary to allow the aluminum wire to expand at the rated temperature. As a result, we are very confident that the magnet we rewound will last for many years to come.

Since then, another one of our customer’s four magnets failed and we will be rewinding it with the same improvements.

There is a lesson here to be learned by everyone: it is sometimes more effective to problem-solve by combining knowledge and common sense, and by questioning standard procedures, than by operating on blind trust alone.

Had the people who rewound the magnet the first time its coil burned searched for the reason for the failure, the customer would have saved hundreds of thousands of dollars over the past 10 years.

Cosimo Geracitano is the manager of Electro Motors Co. Ltd., Port Coquitlam, BC. For more information, visit the website at www.electromotors.ca.