One of the most common pieces of equipment on a mine site is a belt conveyor. No matter what mineral is being extracted, this piece of equipment generally will be present in some form. Depending on the complexity and length of the belt conveyor, there will be at least two pulleys – one at either end of the belt (head and tail pulleys). Most belt conveyors will have additional pulleys for tensioning the belt in some form, and, depending on the mechanism and design of the tensioning system, there could be multiple pulleys.

A pulley is essentially a drum with a shaft that is then supported by two bearings. Those two bearings are typically spherical roller bearings in split pillow block (plummer block) housings. This type of bearing allows for the assembly to be easily mounted on the conveyor frame with a minimal amount of alignment between the foot of the housing and the pulley shaft as a spherical roller bearing can tolerate up to three degrees of angular misalignment.

The original seals in pillow block housings were either strips of felt or metal labyrinth rings (triple ring seals), which are non-contact and depend upon sufficient grease being added to the pillow block to fill and purge this labyrinth. In most general industrial applications this type of seal was adequate. 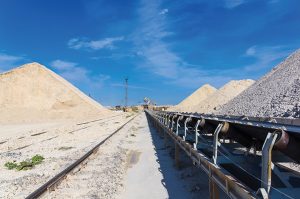 However, in mining applications, this seal did not do a great job, and in such mines that extracted abrasive materials such as iron ore (taconite), the users were not satisfied with the performance of the seals and bearings. The users at these “taconite” mines developed a more robust seal that was more complex and included direct grease feed to the seal to purge the contamination. This type of seal has come to be known as a “taconite” and is essentially the standard seal for mining applications. However, the only “standard” feature is that it is a grease-purgeable seal, and there are many different variants on the market today. This is unfortunate as a user may specify a “taconite” seal, and, hoping to get the best performing design, they get the least expensive design.

As the reliability engineers in mining companies have tried to improve their performance of their pulleys, some, specifically oil sands mining companies, have invested in more and more complex taconite-like seals. Some of these seals feature external shrouds, lip seals, V-ring seals and more complex labyrinths all to make it more difficult for the external contamination to enter the bearing cavity. Although taconite seals have improved the performance of pulley bearings, they are not infallible. A mining company in Australia studied the performance of sealing and found
that the iron ore dust still was able to work its way through the taconite seals and into the bearing cavity. It was even observed that the iron ore made its way through to the other side of the bearing.

Based on observations at a Canadian iron ore mine, it appears that the contamination makes its way along the areas of highest shearing of the grease, specifically along the interface of the shaft and the grease pack in the housing. The key observation was that when looking at the degree of contamination in a housing, the contamination was concentrated nearest to the shaft and grease at the inner surfaces of housing (cap and base) farthest away from the shaft had the cleanest grease. (This makes sense, as anyone who makes pancakes on Sunday morning knows that to get the flour blended into the batter, you should scrape down the sides of the bowl; otherwise, it just stays there unblended.)

Since this lip seal is inside a “sealed” cavity, it does not have to deal with gross particles, spray from pressure washing, rain; it just needs to provide a barrier between the grease churning at the shaft/grease interface. And, this area of grease is the highly sheared zone, which is most likely contaminated.

However, we do know of an overall issue with seals of all types. They do not like angular misalignment. With labyrinth seals, the seal designer must
open up the spaces between the labyrinths to allow for misalignment, making more access to the contamination. As the more complex taconite seals were developed and lip and V-ring seals were added, they were made more sensitive to angular misalignment, which opens the lip-contacting area.

For the external seals to be most effective, they need to be far more accurately aligned than the open spherical roller bearing.

As can be seen, we have added layers of protection to the bearing, and have created greater demands for alignment. This is not to say that if you have misalignment your bearing will quickly fail (such as with tapered roller bearings and cylindrical roller bearings); rather, as the misalignment increases, the less effective the sealing is. Therefore, the bearing will still operate; it will just have a shorter service life, as more contaminants will be allowed to enter as the amount of angular misalignment increases.

From field experience, the best performance has been achieved using sealed spherical roller bearings with taconite seals and accurate housing
to shaft alignment (achieved by laser alignment practices). It is a given that taconite seals must also be greased and constantly purged.