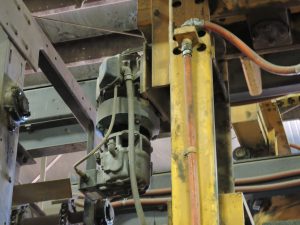 As counterintuitive as it seems, the right brakes can speed up a production line. When St. Vrain Block Company, in Dacono County, CO, began switching out faulty brakes for brakes that use oil shear technology, maintenance downtime plummeted, the production line was more efficient – even the quality of the blocks reflected the change.

St. Vrain Block knows a thing or two about tough production lines – they’ve been manufacturing high-quality concrete products since 1946. In 71 years of operation, they’ve learned to prioritize education of employees and maintenance of equipment, but most of all to have the right tool for the job.

After a long series of short-lived dry brake motors, Randy Howard, who oversees production at St. Vrain Block, ran an experiment at the end of their Besser production line, where product that is cured goes into a cuber. The constant maintenance requirements – adjusting the distance between friction stack and pressure plate, for instance, coupled with the short service life, drove Howard to explore other options. Rather than simply replacing the Warner model EUM-180-20MBFB brake in this installation, he opted to try a MagnaShear oil shear brake from Force Control Industries, instead. That was in 2006, and that original MagnaShear MSB4 brake is still in operation today.

As the brake is engaged, the fluid is compressed, and transmission fluid particles shear – transmitting torque to the other side. This torque transmission causes the stationary surface to turn, bringing it up to the same relative speed as the moving surface. Since most of the work is done by the fluid particles in shear, by the time the surfaces actually meet or “lock up” wear is virtually eliminated. Because there is no direct contact between the friction surfaces during acceleration or deceleration, there is no wear – and thus, no need for adjustment or replacement of disks.

Dry brake systems, however, depend on friction between sacrificial surfaces surrounded by air to transmit torque. Heat dissipates slowly in air, and the surfaces absorb the heat, causing wear and degradation of material. As material is abraded, positioning inaccuracy increases, requiring adjustment and eventual replacement to maintain proper parameters.

St. Vrain Block’s skip hoist assembly is living proof of the durability of oil shear technology. He estimates the Warner dry brakes would last three years in this application, and required constant adjustment and maintenance before needing to be replaced – an expensive process which shuts down the production line.

“I’d say the MagnaShear is 80 per cent better than the Warner brake setup. Customers like it because they can see the blended colours easier,” Howard said.

With a successful installation under his belt, Howard opted to replace other dry brakes with oil shear technology as they failed.

In 2014, Howard noticed that the blocks coming from the skip hoist were monochromatic rather than multi-coloured, as they should be. This design requires precise stopping to ensure proper blending of colours within the block. The Warner dry brake was used to control the amount of colour going to each block, but was delaying my critical fractions of a second. As dry brake pads wear, the distance between the friction disc and the drive plate increases, causing a delay in brake engagement. In St. Vrain Block’s case, the delay of about half a second caused variations in the colours of the finished product. Instead of multi-coloured texture throughout the product, the block would be more solid – less aesthetically pleasing to potential customers in their retail yard.

So he switched out the brake on the 5 HP skip hoist drive on the Fleming line with a MangaShear MSB4 oil shear brake. This technology allows for precise stopping, providing a good mixing of colours within the blocks, ultimately yielding a more aesthetically pleasing end product. Over eleven years after that installation, it’s still operating consistently, with virtually no downtime for maintenance or adjustment.

The MagnaShear brakes have improved production throughout the manufacturing process. Dry braking is inherently a hot system, as friction on the braking surfaces causes heat. In an environment with elevated ambient temperatures, like those encountered during Colorado summers, additional heat can wear down parts faster. Dust and debris, which are common hazards in a concrete block plant, work their way onto dry brake friction stacks, causing inconsistencies and more wear on brake pads.

Simple maintenance, such as adjusting the disc pressure, could be done in 20 minutes, but if Howard had to take the assembly apart and replace parts, it could take up to four hours. It was a waste of Howard’s time, and worse yet, backed up production, as the assembly line had to be off for maintenance.

Magna Shear brakes are totally enclosed in a rugged housing to keep dirt and moisture out. The Oil Shear Technology virtually eliminates wear with no adjustment, so Howard can keep the production line moving and tend to other jobs onsite.

More than bargained for

Howard invested in the MagnaShear brakes because he knew he would be getting increased cycle life and more consistent braking. He didn’t expect them to be simple to install and work with.

“There’s a black wire and a red wire and a white wire. My operators like that there’s not much adjustment required, other than making sure the quill is set. It does the rest on its own,” he said.

Although he originally had some qualms about ordering parts from a company across the country (Force Control Industries is located in Fairfield, OH, near Cincinnati), he was comforted by excellent customer service. When a Bescodyne needed maintenance, Force Control sent St. Vrain a replacement to use while they rebuilt it, so Howard could keep the production line moving. In the factory or in the field, even online, Howard felt supported by the team at Force Control, which eased his concerns about ordering from hundreds of kilometres away.

Randy Howard has an eye for things that last: he oversees the production of concrete block products (products that only get tougher with age), at a company that’s been in operation for 70 years. It’s no surprise then that he invested in MagnaShear brakes. Oil Shear Technology reduces friction between braking surfaces, decreasing wear and increasing cycle life.

With little maintenance or adjustment needed, Howard’s MagnaShear brakes consistently stop when he needs them to stop, ensuring higher quality mixes in products containing different colorations. The rugged housing of the MagnaShear brakes assures that the brake will operate in the dustiest, hottest parts of the process. For Randy Howard, MagnaShear brakes have kept St. Vrain Block’s production line up and running, and from the looks of things, it’ll be up and running for a long, long time.

This article was submitted by Force Control Industries. For more information, visit www.forcecontrol.com.

A version of this article appears in the December 2017 issue of Machinery and Equipment MRO.