How to select the proper industrial shaft seal for an application 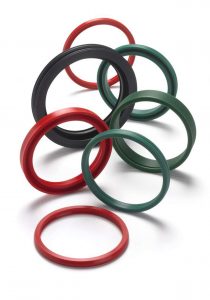 For all rotating machinery in plants across industries, shaft seals play critical roles in protecting bearing arrangements and contributing to the reliability of equipment and systems. Proper sealing ultimately provides an effective defense in keeping machines performing as intended.

The decision-making process in selecting an industrial shaft seal would be easy if there were simply one “universal” seal design and material appropriate for any and all applications. Unfortunately, this is not the case. An ideal seal pick will always be influenced by application operating conditions and requirements.

Industrial shaft seals primarily function to retain lubricant, exclude contaminants (such as dust or moisture), separate media (including lubricant), and resist pressure. Radial shaft seals are the most prevalent types for general and heavy-duty industrial applications. They serve to seal the opening between a rotating and a stationary component or between two components in relative motion.

In general, their design consists of a cylindrical outer covering of sheet steel (the “case”) or an elastomer providing the requisite interference fit to seal statically against the housing bore. In addition, a sealing lip made from an elastomeric or thermoplastic material enables sealing dynamically and statically against a shaft.

The lip is designed with a sealing edge formed by molding or machining and normally pressed against the counterface surface of a shaft (with a defined radial load) by a garter spring. The edge of the sealing lip and the shaft counterface surface ultimately form the most important functional area of any radial shaft seal.

Hundreds of different radial shaft seal design and material combinations have been standardized to a large degree over the years, and custom versions can be developed as necessary.

So where to begin in selecting a proper seal? The first step is to review the inherent application and operating criteria that will impact seal integrity and performance.

Internal and external temperatures. Materials for seals are engineered to perform over an optimum recommended temperature range. Beyond the designated range, thermal stress can adversely harden or otherwise degrade seal material (most notably, nitrile rubber). Such heat aging often will appear as a series of radial cracks on the seal. Conversely, if the operating temperature is too low, the seal material may stiffen and leak. In both cases, a switch to another seal material to accommodate the extremes would offer a fix.

Shaft surface finish. Next to heat damage, shaft surface roughness is a prime cause of a seal’s leakage failure. A shaft surface is actually a series of peaks and valleys. One that is too smooth has difficulty supporting an oil film, leading to a high underlip temperature. Too rough, and peaks can project through the lubricating film and abrade the lip. Manufacturers will typically provide surface roughness and finish specifications, based on industry standards. These specs should be followed to prevent premature seal wear and failure.

Shaft surface speed. Radial shaft seals inherently are designed to perform with designated surface speed limits. Generally, surface speed capability and parameters such as seal torque, power consumption, under-lip temperature, and the effect of dynamic run-out will take inverse proportions. All these speed-related influences can affect seal service life. If the application exceeds speed recommendations, specialized design considerations would be recommended, since exceeding the limit could result in the lip of the seal failing to control fluid, including lubricant.

As examples of variations to help compensate for higher shaft speeds, choices can be made to reduce the radial load of the seal lip, switch to a sealing material that can handle higher temperatures generated from higher speeds, change the lubricant type or viscosity, optimize the shaft sealing surface, and/or turn to a non-contacting seal design.

Internal and external pressure. Pressure loading from system conditions or a fault (such as a plugged vent) will mechanically load and distort a seal’s lip profile, resulting in rapid wear and failure. As a guideline, standard industrial radial shaft seals are designed for only about 7 psi (pounds per square inch).

In applications exhibiting higher shaft speeds, the permissible pressure differential across the seal becomes smaller. As pressure is applied to a seal, more of the lip surface is forced against the shaft, which produces greater friction (as does increased shaft speed). Since too much friction will lead to faster wear and shorter life of a seal, the two parameters of pressure and surface speed (known as the PV factor) must be balanced against each other for maximized seal performance.

Among the options to compensate for the effects of pressure, adding a metal support ring under the lip back face or the lip profile of a seal can be redesigned (by the manufacturer) to resist deformation under pressure loading and moderate surface speeds.

Shaft eccentricity. Radial shaft seals can accept certain ranges of shaft deviation from true center or the shaft diameter not rotating in a true circle. Outside of a manufacturer’s limit, these conditions could “crush” the seal lip, resulting in rapid wear and/or open a gap causing leakage. Limits should be respected.

Fluid media. The material of a seal must be chemically compatible with the fluid media to be sealed and with the lubricant in an application. Otherwise, the seal may be chemically attacked, resulting in rapid wear and damage, catastrophic material decomposition, and/or excessive swelling or shrinking.

The choice of a proper material to promote seal compatibility with media especially deserves close scrutiny. For example, nitrile rubber will perform well with a wide range of mineral-based oils as lubricants, but polar solvents (such as acetone) can cause catastrophic swell (observed as a softening) and physical destruction of the seal. Similarly, seal compounds such as ethylene propylene will swell rapidly from contact with aromatic hydrocarbons and mineral oils. And some synthetic-based lubricants, while resisting oxidation, can attack rubber compounds with detrimental results.

The material of a seal, then, is as critical as the seal’s design. Must the seal work within certain temperature and pressure ranges? What types of fluid media are being sealed? How about the role of friction? All these and similar considerations can help point the way toward an appropriate seal material (or materials).

However, while a material may exhibit excellent properties in meeting some of the requirements in an application, the material may fall short in others. As an overview, the following relative property advantages and disadvantages of commonly used seal materials can provide a big assist in narrowing selection.

Of course, it should be underscored that these general pros and cons represent guidelines only for further evaluation against application requirements to determine the viability of a material. An experienced manufacturer can help in arriving at a proper solution.

Nitrile (NBR). Advantages: resists abrasion wear and general oils and performs at low temperatures (down to -55º C). Disadvantages: limited by upper temperature range (up to 110º C) and prone to high oil swell in the case of ultra low-temperature grades.

The reality is that many factors will be involved when selecting an appropriate seal material for an application – and tradeoffs in materials should be weighed carefully. Research and technology, however, offer good news: material combinations or specially developed compounds can make the grade.

For example, materials can be paired to impart benefits from the strength of each, such as using FKM rubber for the sealing function and PEEK backup for pressure resistance. Among available proprietary compounds, a thermoplastic polyurethane (TPU) material has been formulated to deliver unusually high abrasive resistance, low compression set, high physical properties, and tear strength, which makes a seal made from this material especially suitable for use in hydraulic applications.

In addition to materials, coatings can play important roles, whether to accommodate small imperfections in a housing bore surface or to increase seal durability.

The hundreds of industrial seal design and material combinations have not evolved by chance. SKF has been highly proactive. Data from thousands of seal tests conducted annually are entered into a database, providing valuable know-how, broad empirical knowledge base for failure analyses, benchmarks, and a consistent flow of new products and innovative solutions.

Tests for dynamic applications are monitored continuously to verify parameters such as under lip temperature, friction force, oil leakage and a host of other test conditions. Samples are analyzed to characterize failure modes using state-of-the-art instrumentation.

In addition, Finite Elements Analysis (FEA) provides SKF developers with a tool to perform simulations of almost any operating condition using different seal geometries to identify the critical areas in a seal design. This paves the way for introduction of new versions.

All such ongoing work has resulted in an expanded portfolio of seal design and material choices, augmented by custom alternatives. The proper balancing of application requirements and an understanding of how seals will subsequently perform as part of a system can pay of in solutions that properly seal the deal.

Bryan Uncapher is Director-Seal Business Development for SKF USA Inc. He can be reached at Bryan.S.Uncapher@skf.com.