How a mechanic masters reliability engineering

“Certain people are drawn to reliability because they have a passion for doing things the right way or doing things in an optimal way,” says Jeff Smith. 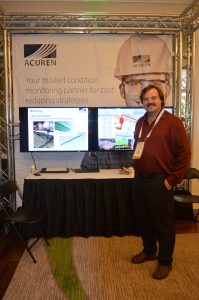 Smith recalls the moment as the first time he engaged in reliability. “Mean time to repair, mean time between failure… I didn’t even know these words existed back then.”

It was 1982 and not a lot of people did. Yet Smith, who is currently a reliability subject matter expert with Acuren, a provider of nondestructive testing (NDT), inspection and related services, made it his mission to continuously improve and to run diagnostics on systems and equipment so that they “run cooler and better.” If the railway incident was the trigger, Smith set a course for his career as a perpetual student of reliability. “Certain people are drawn to reliability because they have a passion for doing things the right way or doing things in an optimal way,” says Smith.

CPR benefited from Smith’s proclivity to learn for 11 years. The railway promoted him seven times, each time offering a new challenge to master equipment for heavy haul systems and optimize processes and logistics.

When a restructuring caused a swath of layoffs at CPR, Smith could have taken a demotion in order to stay on, but he opted for a cash buyout instead and started his own consulting company – Accu-Track Machinery. Ironically, Smith contracted his skills back to CPR. With just two mechanics and a small shop, his outfit repaired electronic component for the railway until his client roster grew to include banks that required him to apply reliability engineering to equipment in their appraisals. “It was quite a going little business, says Smith.

Then, a life-altering incident forced Smith to close up shop. His estranged father had cancer. Smith moved to Chetwynd, B.C. to be with him and during this time reverted to his trade ticket. “Because of all my upper management experience, Bullmoose Mine gave me a job as a lead hand on a shovel and drill crew in a mining operation,” says Smith.

But when as a position for a predictive maintenance specialist opened at a pulp mill, Smith scooped up the role. He set to work by dividing the crews of millwrights into two groups – a proactive maintenance group and a reactive maintenance group. One project involved introducing the mill’s first set of handheld computers (“the old green screen DOS boxes”). The software provider, Design Maintenance Systems Inc., took note of his talent and poached him to implement condition-based maintenance programs, including vibration and thermography, for clients. “With Design Maintenance Systems I learned CBM – and I am considered fairly good at it – but I learned after four years of doing it that I had saturated what I could learn there.”

DMSI didn’t do much in the way of structured work, such as reliability centered maintenance and task analysis, and Smith wanted to fill these gaps in his knowledge. An opportunity at Ivara Corp. (now owned by Bentley Systems) offered this prospect before making Molson’s Vancouver brewery his next pit stop.

Molson’s Vancouver brewery allowed Smith to apply task analysis and to design their CBM program. The brewery ran about 1,600 cans per minute at the time Smith joined the plant. Within two years Smith’s reliability implementation helped the brewery increase efficiency to 2,200 cans per minute, and shrinkage was down to 0.07 per cent from 2.75 per cent. “That alone is worth millions. We reduced customer complaints by 66 per cent. Terry Carrie, the brew master thought I was a hero!” After two years the line was running at 75 hectolitres per man-hour, which is two-times world class.

Smith says that he started placing constraints on how much time he would spend with an organization so he could be challenged to achieve a goal of learning and then applying his knowledge. He told Molson that he would work for them for two years. “I thought: In two years I am either going to be very successful or not. Reliability engineering is a change job – if you do it right, you actually have a finish point. Not that you’re ever done optimizing things, but you have continuous improvement loops so that the system is self-sustained.”

Not big on routine, Smith moved on to start up his own company, Reliability Laboratory in 2007, which allowed him to subcontract until Teck Coal Ltd. later lured him in full-time as a reliability lead. During his tenure, Teck won Uptime magazine’s Best Emerging Maintenance Reliability Program Award and Smith was nominated for corporate leadership and innovation awards.

An unintended consequence from Smith’s ongoing learning is that he has made an indelible mark by sharing his knowledge; his expertise has landed him on committees developing the Body of Knowledge for both the Association of Maintenance Professionals and the Society of Maintenance and Reliability Professionals, and he has worked on the United States tag developing ISO 55000.

Smith has six months left on his two-year commitment with Acuren, but he doesn’t yet know where he will land next. “I came to Acuren to learn – we do laser scanning and radiography, and I am being schooled in all the tools for non-destructive testing… I am not sure I know what to do next. I’ll likely start an organization where I can just apply stuff again.”

This article was published in the February 2016 issue of Machinery and Equipment MRO.