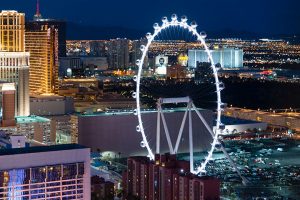 In a quest to find the oldest bearing, we marvelled at the fact that the Ancient Egyptians used a form of roller bearings to help move massive bricks during the construction of the pyramids. But we were hardly surprised. Why shouldn’t formidable engineers have the ingenuity back in 2600BC to produce a version of a highly engineered component that could move machinery at relatively high speeds and carry remarkable loads?

Chasing down the largest bearing, however, is tricky, as it depends on the bearing type. Likely contenders can be found in wind turbines, draglines, tunnel bores, mining trucks and Ferris wheels.

Consider as an example the ongoing rivalry for building the largest Ferris wheel, where the competition for bragging rights is partly driven by the size of the bearings. The Millennium Wheel, a.k.a. London Eye (135 m), went around briefly as the world’s tallest observation wheel, thanks to two FAG spherical roller bearings produced by Schaeffler, until it relinquished the top spot to the Star of Nanchang (160 m), located in Jiangxi, China. Then, the Singapore Flyer (165 m), which runs on two SKF spherical roller bearings, each with an outside diameter of 2.18 metres, had a short spin at the lead. But all bets were off once the Las Vegas High Roller was erected in 2014. At 167.6 metres, the wheel sports two custom-designed SKF spherical roller bearings that weigh about 8,800 kg with a 2,300 mm outer diameter, 1,600 mm inner diameter and a width of 630 mm.

For more facts and figures, check out the April 2017 issue of Machinery and Equipment MRO.