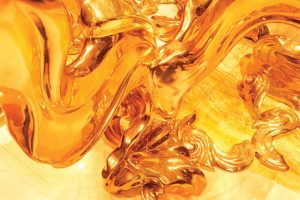 Tough environments do not only mean dirty and wet, but also cold (-40˚C) in the winter and hot (+40˚C) in the summer.

To simplify, slow and dirty refers to a wide temperature range. Each of these elements poses a challenge to bearing lubrication.

Most heavy bearings are lubricated with grease. Grease serves two functions: lubrication and sealing. Lubrication is the creation of a separating film to prevent metal-to-metal contact of
the rolling elements with the races and sealing bearing prevention of ingress of contaminants.

Slow rotation
Slow rotation poses a problem with lubrication. The relative speed of the rolling element over the races is not fast enough to create a separating film between the two surfaces. When the speed is below 20,000 mm/minute (rpm x pitch diameter), theory says a lubricating film cannot be created by the oil, regardless of the viscosity.

Under this speed the additive package or the extreme pressure (EP) properties of the grease becomes very important. It is often recommended that moly additives, graphite additives or Teflon additives be used to create a solid film to prevent metal-to-metal contact.

The soap type can also be helpful in slow-rotating applications. A calcium-sulphonate grease has some very good EP properties that may help.

Prevent contamination
The most important role of grease in a dirty-wet environment is its ability to block the path of contamination into the bearing and to carry away the contamination.

One tactic is to create a system in which there are three barriers to the contamination. The first is a grease purgeable seal (often referred to as a taconite seal), the second is the space around the bearing being filled with grease, and the third is a seal integrated with the bearing.

But education in simple tools such as colour coding or a different grease fitting (that is, button head for the bearing and standard nipple for the purges) may prevent incorrect grease usage.

Over-greasing concerns
I look at a minimum of one failed bearing per week and have been doing so for more than 20 years. And I can confidently say that I have seen many, many more bearing failures from a lack of lubrication and from contamination than from too much grease. The only cases of too much grease that spring to mind are in bearings with an integral seal (such as ball bearing unit blocks) where the grease pops the seal and in higher-speed bearings with inadequate passages to allow the spent/contaminated grease to exit the system.

Hot and cold
Challenges are more likely to stem from the cold, rather than the hot end of the temperature range. One thing in a bearing’s favour is that when it is operating, it generates heat, so when the temperature is -40˚C outside, the temperature inside the bearing is typically warmer. The time spent at these low temperatures is probably very short. As well, if there is a condition where the grease has thickened, more heat will be generated, essentially “fixing” the problem.

Other problems associated with cold conditions are associated with delivery, as opposed to lubrication itself. Typically, both manual greasing systems (sending a technician out to a bearing position on a very cold day) and automated greasing systems are inclined to malfunction when the temperature falls. There is no easy solution to this problem and it explains the challenges faced by maintenance teams.

The lack of easy-to-access technical resources for greases in cold conditions is also a factor. Lubricant documentation often overlooks discussions about sub-zero operating temperatures. It is not clear whether this is a function of the market size (not enough customers interested in these conditions) or whether extreme cold is only a transient condition when speaking of the temperature at the lubricating gap (which is where it really matters).

When faced with a wide temperature range, greases with synthetic base oils contribute to a wider range of operating temperatures due to its inherent low-viscosity index, as it reduces the change in viscosity with temperature.

Vibration and shocks
Overall machine vibration and shocks play a role in bearing lubrication in that they cause the grease to be displaced. In a machine that runs smoothly, a reservoir of grease is built up predominately on the cage bars. This grease undergoes a cycle in which it slumps onto the rolling element, then back onto the cage bar. Each time it runs through this cycle it ages. Anything that causes this cycle to occur more frequently also causes the grease to age faster.

When a bearing experiences vibration or shock from external sources, it causes the grease to slump into the rolling path at a much greater frequency, thus causing the grease to age much faster. As well, it can cause the grease to purge away faster from the bearing cavity. Another concern is that constant vibration can cause oil separation from the carrying soap.

What is unfortunate is that a lubrication frequency may be calculated for a machine that is running smoothly and then the operating conditions change.

An increase in machine vibration caused by an imbalance from a broken blade or hammer (as in a hammer mill) can cause the effects noted above to occur. Without an adjustment to the lubrication frequency, the bearing can fail from “inadequate lubrication,” and also depends, from the lubrication technician’s standpoint, on whether the scheduled grease frequencies were followed.