Calling this article, “heavy industry greasing” or “heavy industry oiling” would work, as the real issue is not “lubricating” rolling element bearings, but about preventing the effects of a contaminated environment, or controlling the bearing operating temperature. 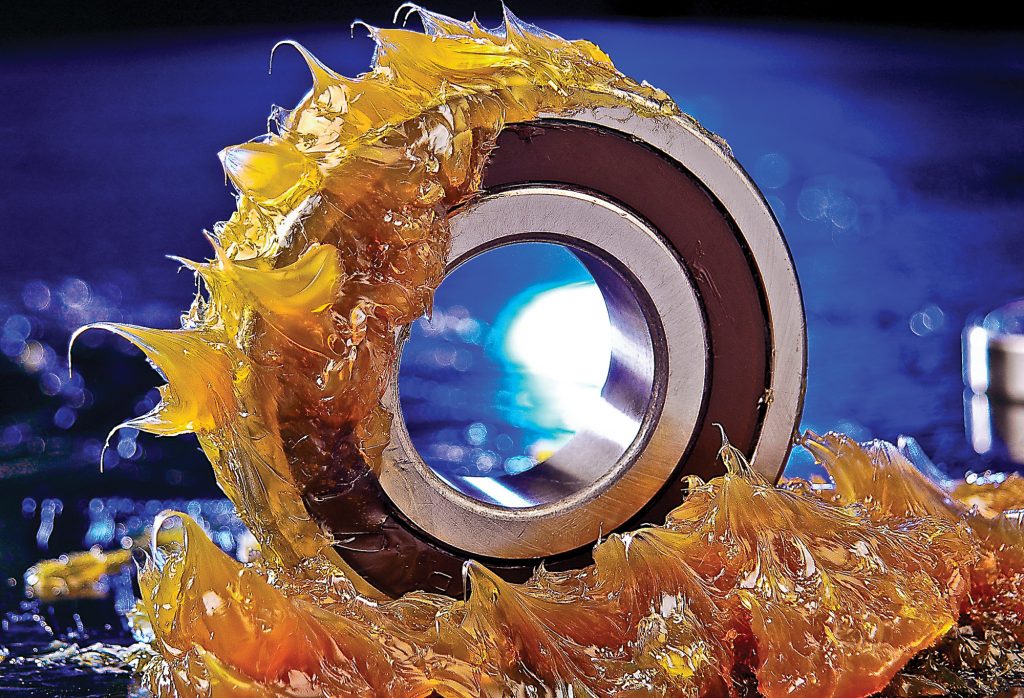 An example that defines the difference between “lubricating” and “greasing” is: an experiment done by E.R. Booser, research scientist, who operated a ball bearing with only two initial drops of oil. The bearing was running at 36,000 rpm for two weeks at a temperature of 100C before encountering failures. The question then is, how much oil is needed for lubrication? In this case, the bearing would have continued to run if one drop of oil was added once a week.

An example, once the grease has been added to the bearing, and the rolling element has created its “channel” in the grease, there is a very small amount of oil that bleeds into the lubricating gap. If the channel remains stable, and is always able bleed oil into the gap, all is good. There are many “sealed for life” bearings in industrial settings (such as electric motors). Looking at a 50hp motor that has sealed for life bearings, and an 1-15/16” shaft unit block ball bearing on a conveyor.

Both bearings have the same insides, 6210.2RSR bearing in the motor has the same size balls and race diameters as P2BL-115-WF unit block. The unit block rotates at 100rpm on a dusty conveyor and the motor that drives the same conveyor rotates at 1750 rpm, but bearings are inside a cavity with a labyrinth seal, and a grease pack protecting the sealed bearing.

Therefore, what are the key “re-greasing” factors?

Sealing
There are essentially two methodologies of sealing a bearing and/or its cavity; lip contact seal, and labyrinth seal. With a lip contact seal, the primary role is to keep the good grease (or oil) in the bearing (area). With a lip seal integrated into the bearing its purpose is to keep the good grease in the rolling contact area. In most cases, an external sealing mechanism like a labyrinth or flinger provides protection against contamination and a space between the bearing and outer seals that contains grease.

With a labyrinth seal, the grease is expected to flow though the bearing (or housing) and out the labyrinths carrying away contamination. If properly greased, the labyrinth seal should always have a bead of fresh grease at its external opening. There are no common calculations that can determine how much grease is needed for labyrinth seals as there are many variables. Such as: operating temperature, NLGI number of the grease used, speed of the application, degree of contamination, and amount of vibration in the machine application The proper amount of grease needs to be determined by visual observation and adjustment by the lubrication technicians.

NLGI number
NLGI number is a measure of the stiffness of grease. Typical bearing grease is NLGI 2. People may say, “we use an EP 2 grease.” Meaning, a grease with EP additives with NLGI number 2. In vertical applications and applications with higher machine vibration, NLGI 3 is used to help the grease stay in place.

Often in automated lube systems, an NLGI 1 or 1.5 is used to help get the grease to the greasing point. In truck chassis lubrication, there are cases where an NLGI 0 or 00 outperforms an EP 2 shop grease. Why? Since this application is on an auto-lube system, there is always some amount of grease going to the application. The NLGI 2, which is stiffer, gets to the application and stays there. While there, it collects dust, and as the application moves, the dirty NLGI 2 grease pulls contamination into the lubricating gap and causes wear. The NLGI 0 grease is easily displaced and falls away from the application taking away the contamination.

Compared to a standard NLGI 2 grease:
NLGI 3 – stays in place under adverse conditions.
NLGI 1.5 – Is more readily pumpable in an automated lubrication system.
NLGI 0 (or 00) – will easily sluff away taking with it contamination. 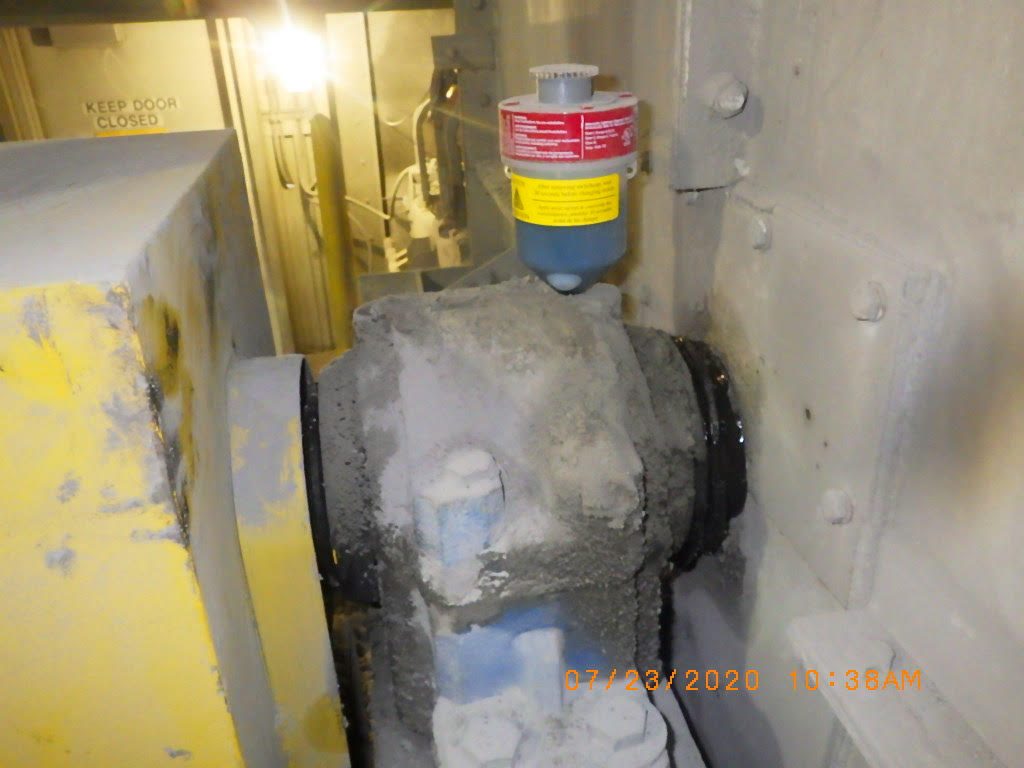 Housing fill level
How much grease should surround a bearing in a housing/pillow block? The housing fill is a function of bearing operating speed and by relationship, how often the bearing will be re-lubricated. Higher speed applications should be initially packed with less grease, knowing that the re-lubrication frequency may be short. Whereas in slow applications, the housings can be packed fuller, knowing that the need for fresh grease is longer. However, there need to be a sealing barrier as provided by the grease in the housing and the subsequent replenishing of grease (for exclusion of contamination).

Therefore, one may specify the same re-greasing frequency for the same size bearing, one in a fan, and one in a conveyor pulley. With the fan, the demand for fresh grease is governed by the grease life due to the higher speed and higher operating speed, which reduces the life of the grease. Whereas the conveyor will demand fresh grease due to the contamination level of the environment. Fresh grease is intended to carry away the contamination.

In the case of the fan, start with a low housing fill, knowing that more grease is coming, and an excessive amount of grease will lead to the bearing overheating. In the case of the conveyor, we are not concerned about the bearing overheating (due to the slow speed) and the housing can be nearly full, and the added grease is intended to get pushed out of the housing carrying contamination away.

Also, over-greasing is when there is more grease added at a rate that exceeds the ability of the bearing cavity purge. For example, in a case with an electric motor, there was a grease drain that had to be opened prior to re-lubrication. On a regular routine, grease was added, with the port open and then the technician, after greasing would replace the drain port. One day, a new technician added grease but was not aware of the grease port and did not open it. The bearing soon failed from excessive greasing.

Slow speeds and additive packages
Once a bearing is going slow enough, it can no longer form a lubricating film that fully separates its contact surfaces. As a rule, once the surface speed falls below 20,000 mm/min, solid additives such as graphite or molybdenum are suggested, as there will otherwise be metal to metal contact due to a lack of oil film. For a 300mm bearing, such as a 23060 CC/W33, this is about 70rpm.

Oil
In terms of oil, we need to recall that a bearing needs only a few drops of oil to operate for some time. For heavy industrial applications, oil can be used to transport away contaminants to a settling tank (reservoir) and filtration.

The primary role of additional oil flow is the control of the bearing operating temperature. The flow rate of the oil is based on maintaining the optimum oil temperature such that the delivered oil viscosity can create an oil film. This is a difficult value to calculate what actual flow rate is needed as there are so many variables in a heat transfer calculation. The appropriate oil flow is determined by first determining the appropriate target temperature, then by adjusting the flow to achieve that temperature. Of course, process changes and startup behavior, throw a wrench into the needed operating temperature of oil.