Grease acts as both a lubricant and a key component of seals used in split pillow block housings. 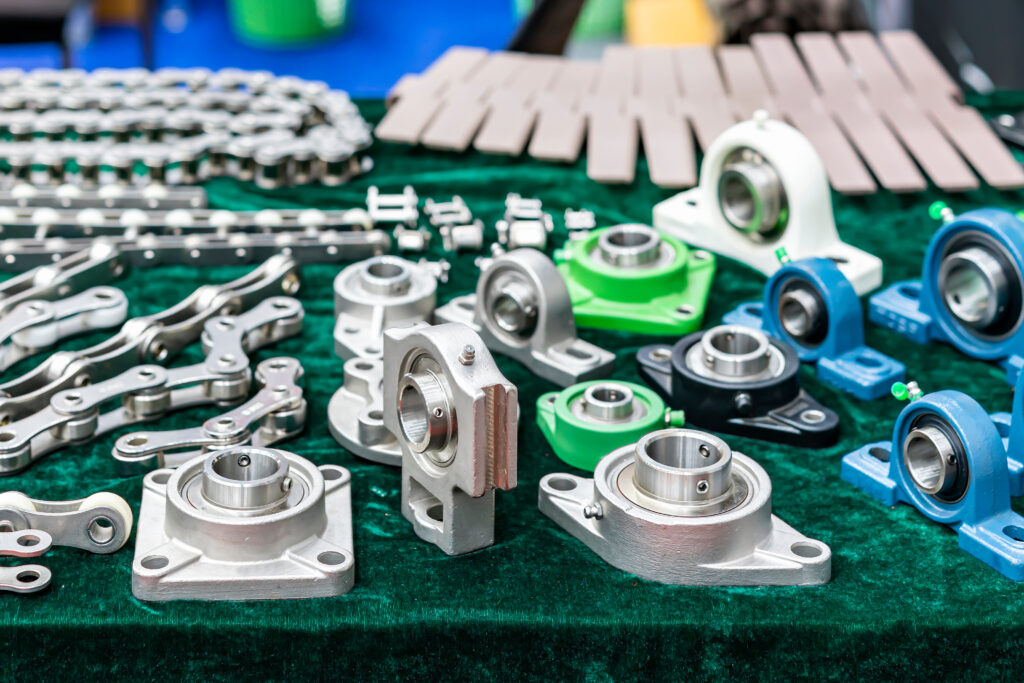 In greased bearing applications, grease serves two purposes, to provide lubrication and to provide a barrier preventing and carrying away contamination. It provides lubrication by forming reservoirs on the bearing cage, and in the un-swept areas adjacent to the rolling elements within the bearing itself. From these reservoirs, oil is bled into the rolling contact zone to lubricate.

As a sealing element, the grease barrier slows or stops contamination from moving between the external seal and the bearing. Keep in mind, external labyrinth seals on their own are not perfect seals, there is no contact between the rotating shaft (or flinger) and the stationary part of the seal itself (stator). The gap is large enough to allow for angular misalignment within the bearing. The gap is also wide enough to allow thermal expansion of the shaft between the bearings.

Once inside the bearing cavity, the external pressure now by be relieved, but within that cavity is the shaft which is rotating and in contact with the grease packed in the housing. The rotation of the shaft shearing with the grease acts like a mixer and the contamination is transported along the shaft from the dirty seal end to the clean bearing end. This is if there is no grease pressure to counteract this transport of contamination.

Therefore, when using labyrinth seals, there must be regular grease flow creating the internal pressure that pushes the contamination out of the housing and out of the seal. Rather, the grease pressure needs to be there to prevent the entrance of grease into the seal to begin with.

Referring to a labyrinth seal, could be as simple as a ‘triple lab’ or LOR/LER seal, which is the standard seal for most split pillow blocks. A ‘taconite’ seal is also a type of labyrinth seal, but taconite seals tend to be more complex than standard triple lab seals and may include, both radial and face labyrinths and lip contact seals. However, there is no standard on the design of a taconite seal. The most significant defining feature is taconite seals have built-in grease inlets such that the seal itself gets its own feed of grease, which prevents the entrance of and purges away contamination.

Where should the grease be put into the assembly? This depends on the housing arrangement: both ends open (BEO – having two seals) or one end closed (OEC – have a seal and end cover); and the type of housing seal (triple lab or taconite), whether it is an open or sealed bearing.

There is a situation in which there may be a fear of ‘over greasing’. Since the bearing is open, and the labyrinth seals are open, there is ample room for grease flow out of the bearing and housing. To keep the grease flowing though the bearing, one should increase the frequency of applying grease to the bearing as opposed to increasing the amount of grease at the time of applying the grease. Therefore, grease the bearing two times per month instead of once a month, but put in the same dose which should be calculated based on the bearing dimensions.

The factor 0.002 is adjusted for grease from the side of the bearing and for different units of measure for the grease dose.

In the case of an OEC arrangement, do not suggest add a grease nipple to the end cover, and then used as the single grease inlet to the assembly. I have a specific case in which the contamination ‘won the battle’ at the inboard labyrinth. The grease had to travel across the full width of the housing, through the moving bearing to fight its ingress. The contamination essentially plugged up the inboard labyrinth, caused a dam and no grease flowed. The end cover plate that was made of steel became dished from the pressure generated by the grease gun trying to push grease into the plugged housing.

Case 2 – open bearing with taconite seals
When an application has taconite seals installed, it is recognized that this is a highly contaminated application. The focus should be on ensuring the taconite seals are fed with grease (and worry less about the bearing). Although there are formulas from the individual bearing companies on how much grease to apply to the taconite seal, the values derived are guidelines to use as a starting point. Fresh grease should be seen slowly purging from the seal, which would indicate that the seal/grease system is working correctly.

Case 3 – bearing with integral seal, either taconite or triple labyrinth seal
When a sealed bearing is used, the frequency of re-greasing the bearing can be significantly extended. When doing the calculation for the required frequency of re-greasing, it would be safe to assume that the cleanliness level is good to excellent. This may mean that the bearing itself will only need to be regreased every three months (depending on bearing size and the speed of the pulley). If using a taconite seal, then it should still be greased as normal, such that there is fresh grease apparent at the gap.

To determine the amount/frequency of grease addition to the housing cavities, it could be treated like a taconite seal, in that, there should be enough to cause some fresh grease to purge from the housing seal.

How do I keep grease purging through the seals?
To achieve a flow of grease through the sealing system (taconite or triple labyrinth), it essentially means regular visits by a lubrication technician or some form of automated lubrication system. These can be as simple as a single point lubricator on each seal or a more complicated multipoint automated lubrication system that feeds several bearings and seals. Automated systems still need attention at least in terms of monitoring them to ensure that they are still running, they have not been knocked off by rough handing, the lines cut or damaged, the lines being forgotten to be re-attached, and the reservoir becoming empty.

When is the best time for manual greasing?
The best time for manual greasing is when the machine is running. This allows for the newly added grease to be pushed out of the swept area of the bearing and to freshen up the reservoirs adjacent to the rolling surfaces. It is understood that this is not always possible, so greasing when the machine is at a standstill is still better than not greasing at all.

In summary, grease acts as both a lubricant and a key component of seals used in split pillow block housings. When determining re-lubrication practices of split pillow blocks, getting grease to and through the seal is of prime importance. This is achieved by both appropriate placement of the grease inlets and the appropriate timing of the delivery of grease.

A sealed spherical roller bearing can provide a third barrier to contamination given that the external seal and housing grease pack is not fully effective.
_______________
Douglas Martin is a heavy-duty machinery engineer based in Vancouver. He specializes in the design of rotating equipment, failure analysis, and lubrication. Reach him at mro.whats.up.doug@gmail.com.