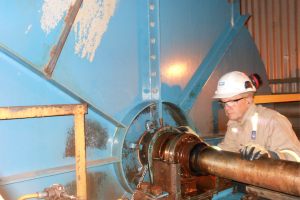 Douglas Martin writes the popular “What’s Up Doug?” column, which appears in every issue of Machinery and Equipment MRO.

To the uninitiated, Douglas Martin’s crusade to help integrate the people who spend the money with those who pay the bills might seem lofty. But a recent visit to Catalyst Paper, illustrates how the heavy-duty engineer achieves his goal.

The producer of mechanical printing paper is building efficiencies into its process by speeding up machines, which in turn will speed up production, says Martin. “They had a bearing that had come out of service prematurely and the grease looked burnt up and ugly. I was there to do an assessment on whether or not they had reached a speed such that they need to convert that bearing position to oil. In other words, the speed you can run a bearing while using grease as a lubricant.”

Catalyst will receive sound tactical advice on how to extend the life of this bearing under new conditions, but not before Martin has had a chance to work with the lubricant manufacturer, look at the operating temperatures and inspect the loads. Martin is routinely called in when there is a failure, to offer guidance on root cause analysis or to provide knowledge about what’s wrong with a bearing, lubrication, or what to do when a gearbox is failing.

“Any successful reliability project requires expertise,” says Martin. “You still need a subject matter expert to help guide you to what the real problem is.”

There was a time when Martin’s ascent to his role as a heavy-duty machinery engineer at SKF might have been in question. After he graduated from UBC’s mechanical engineering program in 1987, he interviewed with several pulp mills in British Columbia but didn’t get a job. “I don’t think I interviewed very well, but one company asked me to come back and interview in a sales position… It made me think: what are people seeing in me that I don’t see?”

Hindsight proves that Martin was destined to carve a career path as a heavy-duty machinery engineer driven through technical sales roles. Experience gained from working with three bearing specialists makes him less interested in wheeling and dealing on price and steers him instead toward helping customers solve problems. “I’ve heard the song and dance that Torrington put on, that FAG put on, that SKF put on… When I deal with my customers, I am not providing them a solution from the marketing department. Rather, I’ve seen three different stories, so it’s about what makes sense. All companies have their own spin on things and there’s a bit of truth in each one of them. So which one of the stories applies correctly in the application?”

Martin has been in his current role with SKF for more than 12 years, but he still calls on end-users that have been on his client roster for 25 years. “I’ve been calling on Agrium in Saskatchewan since 1991 and Catalyst Paper since 1996.”

If there was any doubt about Martin’s skill, they are quickly waylaid at Canfor Pulp, where he recently conducted four sessions in chemical maintenance training. “What crops up during the seminar is that a gentleman asks me about a problem they’re having with their bearings and their pulp machine.” Martin leaves the mills with two issues to deal with – one is the poor performance of a bearing assembly and their pulp machine and two mills are questioning their procedures when they rebuilt pumps. “I have follow-up work to do. And that’s one of the benefits of doing maintenance training – it brings out questions.

Martin’s pragmatic style – as opposed to offering buzzy brand plugs – makes him a fitting choice as a frequent contributor to Machinery and Equipment MRO. His popular blog, “What’s Up Doug?” takes readers to the site of the equipment, where he offers a solution that’s “most reasonable for the customer to deal with.”

Providing in-field support on how to use equipment can be mundane for some, but for the nous of bearings it’s a chance to diagnose the overall issue.

“Customers sometimes have strong beliefs in what the answer to a problem is,” muses Martin. “That’s when I get into a technical discussion to suggest alternates.”

This article has been updated from its original version.

Rehana Begg is the editor or Machinery and Equipment MRO. Reach her at rbegg@annexbusinessmedia.com.


Douglas Martin writes the popular “What’s Up Doug?” column, which appears in every issue of Machinery and Equipment MRO.