Industrial equipment design changes as technology changes. As a result, maintenance is not a function, but rather an ongoing dynamic process. 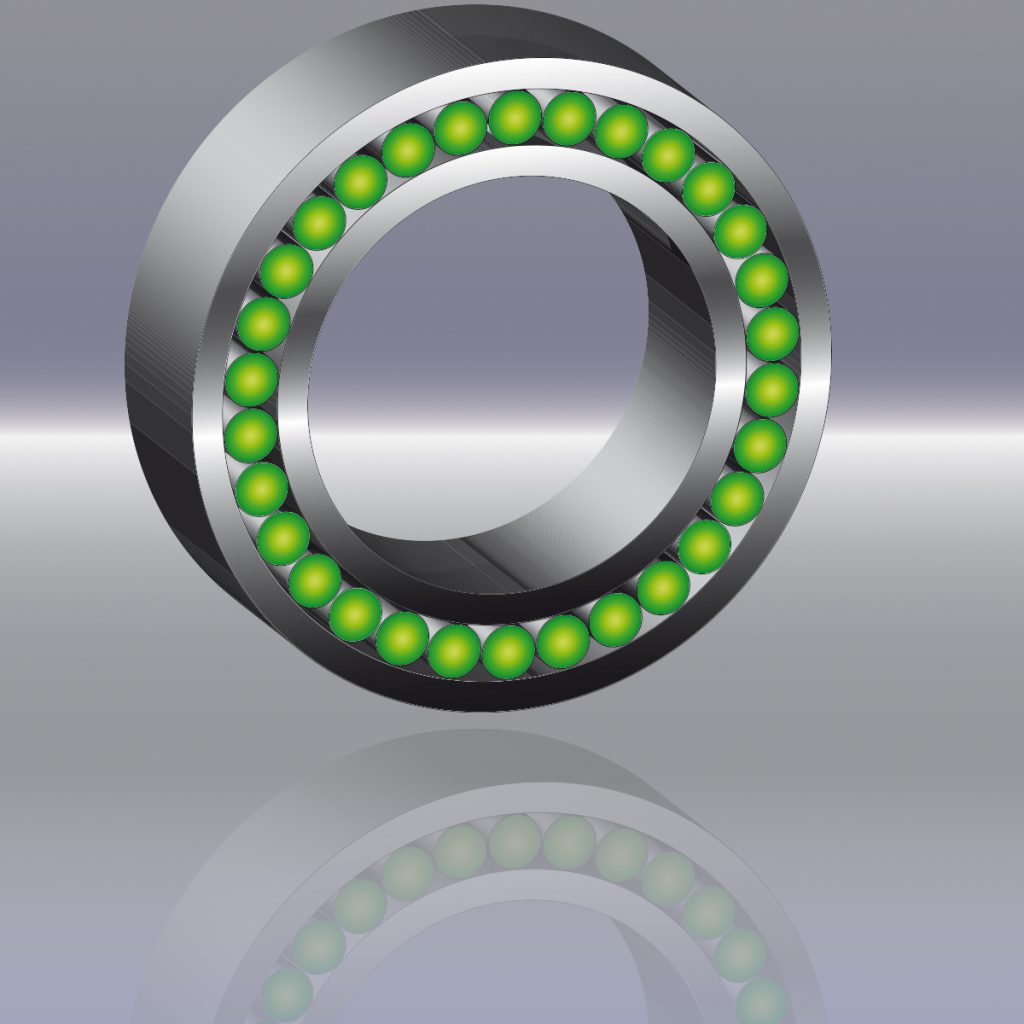 Even now, they continue on this path. I will review some of the highlights of how, in today’s industry, they continue to make energy saving and environmental benefits.

Most recently, a bearing steel manufacturer, Ovako Steel, in partnership with Linde Gas AB, has performed a test in which the LPG was replaced by hydrogen gas. The benefit of burning hydrogen is that the only emission is water vapour.

What was key in the test was whether the use of hydrogen as a heating fuel would affect the quality of the steel. Fortunately, there were no quality issues found when using hydrogen fuel. Although this was a test, it promises a future in which the production of steel can be done with the use of hydrogen fuel without affecting the quality of steel. This will be a significant reduction to the carbon footprint in the manufacture of steel, a key component of rolling element bearings.

Sealed for life bearings
Sealed deep groove ball bearings (DGBBs) have been used for many years. The most common application is in medium to small electric motors that are “sealed for life” or “maintenance free”. The advantage of a sealed bearing is that it does not require re-greasing to achieve the expected system life. Within the past number of years, bearing manufacturers have introduced sealed spherical roller bearings. As spherical roller bearings are one of the most popular bearing designs in industry, there is lots of potential for the use of sealed SRBs in industry and the opportunity to reduce the use of grease used for re-lubrication.

With sealed SRB’s, there is a general rule that if the application speed is less than 50 per cent of the bearing’s reference speed limit, and the operating temperature is less than 70C, then the bearing can be operated as “sealed for life” or “maintenance free”, depending on the level of external contamination.

Of course, the benefit of sealed for life is that there is no need to re-grease the bearing. Without re-greasing, there is a reduction in waste and the need for petroleum-based lubricants.

Three barrier solution
One of the concepts with the use of sealed SRB’s is the concept of a three-barrier solution. This concept means that there are three layers of protection from contamination of the bearing. The first barrier is the housing seal that protects the bearing cavity, the second barrier is the grease fill in the bearing cavity between the bearing and the external seals. The third barrier is the seals integral with the bearing. In terms of environmental impact, the benefit of a three-barrier solution is that the grease used in the secondary barrier can be an environmentally friendly grease, as its only purpose is to create a barrier to resist the ingress of contamination. As such, it does not have to be a mineral oil-based grease (which the bearing needs), it can be a vegetable oil-based grease or other grease that is acceptable to be purged into the surrounding environment.

Biodegradable grease for bearing lubrication
To this point, there is no widely used base oil that can provide the film strength needed for surface separation of rolling elements and raceways. The “magic” of petroleum-based lubricants has not been matched by any current, common solutions. Since grease plays a dual role in a bearing; lubrication and sealing (prevention of contamination ingress), then the role of sealing can be done by an environmentally friendly grease. The three-barrier solution, as described above, lends itself to this, specifically, a high-performance grease can be used in the bearing (one that has a long service life), and then an environmentally friendly grease can be used as the grease used to purge the seals.

One example of such a grease is one which uses an Anhydrous Calcium thickener and a biodegradable ester oil.

Examples of where an alternate seal can be used are in:
Freight cars in railways: An improved lower friction seal used in 200,000 freight cars travelling at an average speed of 80 km/hour can offer a total power savings of 160 MW over the traditional seal. This power savings can be translated in to a reduction of the burning of diesel fuel and CO2 emissions.

Idler roller bearings in conveyors: A bearing using a shield instead of a contact seal in a converter idler roller can reduce the energy consumption by 66 per cent (based on test results at 650 rpm using a method that follows DIN 22112-3). This translates to savings of 20 GWh and 6700 tones of CO2 for a conveyor equipped with 120 000 idler bearings.
Car wheel bearings: Improved seal designs in hub bearings have reduced the friction by 25 per cent compared to conventional units. These higher efficiency units help reduce the CO2 emissions of medium size cars by up to 1.3 g/km.

Bearing remanufacturing: Depending on their size, bearings can be remanufactured. Instead of scrapping the bearing, it can be sent to a remanufacturing facility and the appropriate actions can be taken, such as re-grind of the raceway and replacement of components. Besides the economic benefit of using the existing components, there can be savings of 80 per cent of the CO2 emissions compared to the manufacture of a new bearing.

Reliability improvement
Bearings can contribute to reduction in emissions by improving reliability of machinery. By preventing machine breakdown, pollutants can be prevented from entering the environment due to process interruption. This is especially notable in the oil and gas process industry.

Every year, the oil and gas industry “flares” an estimated 150 billion cubic metres of waste gases. Along with SO2 that causes acid rain, gas flaring emits about 400 million tons of CO2. Much of this flared gas can be captured by vapour recovery units (VRU) and then be used or re-injected. Doing so reliably is difficult, as the harsh process gases can cause VRU compressor bearings to wear out and fail in six months or less. When bearing failures cause unplanned compressor downtime, gas recovery stops and emergency flaring starts.

In the case noted above, bearings with high nitrogen steel and ceramic rolling elements were used to addressed the harsh conditions, however, this does illustrate how there can be a relationship between machine reliability and avoidance of harmful emissions or other forms of pollution.

Hybrid bearings with ceramic rolling elements
Growing in use and availability are hybrid bearings, using ceramic rolling elements. Although the production of ceramic balls began in the 1980s, they have not come into more widespread use until the last decade. Advantages that can be gained from ceramic rolling elements are: lighter weight, and a lower moment inertia, improved surface contact properties allowing less lubricant of poorer quality, or rather allowing extended “sealed for life” operation, and prevention of electrical current flow through the bearing, which is a significant issue with variable frequency electric motors.

These properties of hybrid bearings make them ideal bearings for electric powertrains for cars, trucks and trains, which require bearings that can survive high speeds, accelerations and temperatures with minimal lubrication. In this case, rolling element bearings facilitate the growth of electric vehicles.
Besides the very nature of rolling element bearings (sometimes known as “anti-friction” bearings) as friction reducers, there are additional opportunities for energy savings and environmental benefits offered by them. These benefits can be realized from cradle to grave in the life-cycle of a bearing. MRO
_______________
Douglas Martin is a heavy-duty machinery engineer based in Vancouver. He specializes in the design of rotating equipment, failure analysis, and lubrication. Reach him by email at mro.whats.up.doug@gmail.com.