In the united effort to preserve global security of energy supply and protect the climate, the industrial sector is justifiably under intense scrutiny as a significant energy consumer. A focus on energy consumption, and therefore energy efficiency, is inextricably bound to energy security. Energy consumption can be significantly reduced by looking beyond improvements in components efficiency to a systems approach to efficiency.

“Efficiency First,” energy saved is an energy source in itself

Reducing consumption has just as great a role to play in ensuring a sustainable energy supply in the future as converting from fossil fuel to renewable energy sources or expanding energy supply capacity. Energy efficiency is not only crucial in reducing CO2 emissions and production costs; it is also a key enabler in ensuring a stable supply, because it reduces the need to expand the grid or build new power plants. What is not consumed is not transported, saving on expansion and maintenance of the associated grid infrastructure. Improving energy efficiency does require an upfront investment. However, in many cases this investment is more cost-effective or valuable than the equivalent supply-side resources. For example, an installation of variable speed drives at Holcim Cement slashed utility bills so significantly that the project payback period was less than two years.

It makes sense to talk about energy efficiency as an energy source – and the first source.

Some of the key ways in which “Efficiency First” can contribute to more cost-effective, competitive energy choices are:

A component versus system approach

Typically, the electric motor is a component in a motor system, responsible for the conversion of electrical power into mechanical power. In turn, this mechanical power drives equipment such as fans, pumps or compressors. Analysis by the IEA shows that electric motor-driven systems consume at least 7,000 TWh/year globally, which is roughly equivalent to 45 per cent of worldwide end‐use electricity consumption. Electric motor-driven systems are therefore the largest single consumer of end‐use electricity and a prime target for co-ordinated government policies on a global scale.

A large untapped potential for energy saving can be harvested through energy-efficiency regulations that incentivize system-based optimization rather than just optimization at the component level.

Potential of the systems approach

The wide range of energy-reduction strategies fall into three general categories, with differing values. As stated above, the total energy reduction potential is split into three categories, which will now be addressed in more detail: 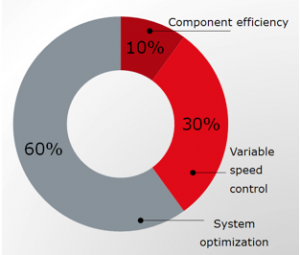 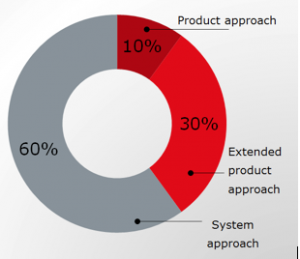 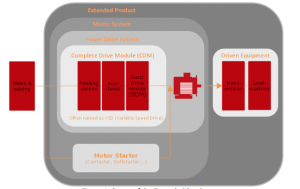 Figure 3: Scope of the Extended Product

When choosing which combination of approaches to apply, it is vital to act on the basis of cost-effectiveness over the lifetime of the facility.

Even though system-level optimization offers the highest energy-saving potential, it is important that improving component efficiency not be overlooked. Efficient components will aid in providing motivation to improve the extended product efficiency and the system efficiency, and in achieving the greatest gains for the global energy supply.

How can we promote the extended product and system efficiency approaches? If businesses, trade organizations, and policymakers can agree on a universal benchmarking standard that takes partial loading into account, it will be easier to compare and assess the efficiencies of different system solutions.

Using a standardized testing system, manufacturers can differentiate themselves by demonstrating the superior efficiency of their pump systems in terms that are comparable with competing systems. In this way, pumping industry suppliers are effectively motivated to optimize pump system energy efficiency ratings, without the need for government regulation.

In contrast to the Hydraulic Institute’s voluntary labelling program, The Energy Conservation Standards for Pumps uses a mandatory approach. Implementation of this regulation is predicted to reduce U.S. electricity consumption by 1 per cent in the period 2020-2045, due to pump system optimization alone. The standard states: The cumulative reduction in CO2 emissions through 2030 amounts to 2.7 Mt, which is equivalent to the emissions resulting from the annual electricity use of more than 0.37 million homes.

Challenge to legislators and regulators

Common wisdom among leading authorities within research and regulation says that effective regulation has to come in a well-defined order:

However, this approach does not address the “low-hanging fruit” first, although it seems easy from a regulatory point of view. Rather, all three areas should be addressed in parallel, using well-defined and suitable tools in each area.

System level optimization can without a doubt deliver the greatest energy savings. Therefore, the focus should not only be on optimizing component efficiency, but also on increasingly improving efficiency at the system level by applying the “extended product approach,” addressing the variable speed drive, the motor, the driven application, and its variable load.

Douglas K. Backman is the Vice President of Canada at Danfoss Drives. He is responsible for sales, service and operations, and also has P&L responsibility for Danfoss Drives in Canada. For more information, visit www.danfoss.us.