Lower prices range, high volatility and increased competition for markets are hurdles for the oil and gas industry. 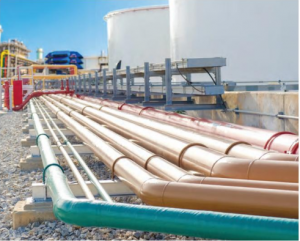 With more than $40 billion in annual investments, Canada’s oil and natural gas industry is the largest private investor in the country, outpacing all other heavy hitters, not least of which are Ontario’s automotive industry, Quebec aerospace and B.C. forestry.

But the industry faces a quandary. Canada has fallen behind in global competitiveness and is overshadowed by U.S. production of tight oil and shale gas and flat U.S. oil demand.

Energy forecasters, including CAPP, predict that the industry will continue to face a lower price range, high volatility and increased competition for markets.

Canada’s stringent regulatory system ranks high on the list of barriers to attracting investment and innovation, said McMillan. “Energy jobs and investment will leave Canada for other countries unless there are changes to encourage growth the industry can build on,” said McMillan.

CAPP estimates that between 2008 and 2016, the U.S. has increased oil production 77 per cent and increased natural gas production 35 per cent. This signals bad news for Canada, particularly given the limited supply opportunities when access to emerging markets – notably India and China – are impeded. 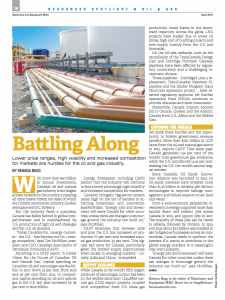 While Canada is the world’s fifth largest producer of natural gas, output has been on the decline since 2007. Liquefied natural gas (LNG) export projects, coupled with competition from U.S. shale gas production, share blame in the downward trajectory. Across the globe, LNG projects have stalled due to lower oil prices, high cost of building projects and new supply (mainly from the U.S. and Australia).

On the oil side, setbacks, such as the cancellation of the TransCanada Energy East and Enbridge Northern Gateway pipelines, have been affected by regulatory uncertainty and a challenging investment climate.

Meanwhile, Canada imports 600,000 b/d to Ontario, Quebec and the Atlantic Canada from the U.S., Africa and the Middle East.

Set aside these hurdles and the opportunity to bolster government revenue persists. More than $160 billion in GDP came from the oil and natural gas sector in 2015, reports CAPP. That same year, Canada generated 1.54 per cent of the world’s total greenhouse gas emissions, while the U.S. contributed 14.34 per cent, making the U.S. the world’s second largest emitter.

Since Canada’s Oil Sands Innovation Alliance (COSIA) was launched in 2012, its oil sands members have invested more than $1.33 billion to develop 936 distinct technologies to improve tailings management and reduce impacts on air, land and water.

From a socio-economic perspective, investments in energy have supported more than 640,000 direct and indirect jobs across Canada in 2015, and 533,000 jobs in 2017. The majority of these jobs can be traced to Alberta, followed by Ontario. In 2015 and 2016, about $3.3 billion was invested in 396 Indigenous businesses across 66 communities.

Canada needs to confront the barriers if it wants to contribute to the global energy markets in a meaningful way, warn analysts.

“Energy jobs and investment will leave Canada for other countries unless there are changes to encourage growth the industry can build on,” says McMillan.

This article was published in the April 2018 issue of Machinery and Equipment MRO.