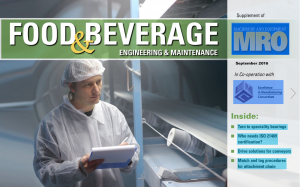 The list of prosecution bulletins and food recalls posted on the Canadian Food Inspection Agency website makes it apparent that enforcing standards can be onerous.

In the first two weeks of September alone, there were at least seven recall warnings and allergy alert notifications triggered by either the company or by the consumer. The recall list includes a popular brand of strained prunes that may be unsafe due to the potential presence of pieces of rubber; one brand of almond butter may have salmonella contamination; and a thirst-quenching beer-based blend of blood orange juice is recalled from the marketplace due to swelling and bursting cans.

While these infractions are a mere sampling of a comprehensive list, they reinforce the need for auditing the compliance of food products and the importance of having specifications for equipment and components to help prevent major catastrophes.

I am reminded of the impact of mad cow disease, which reported almost 1,000 new cases per week at its peak in January 1993. Since 1996, when an association between mad cow disease and Variant Creutzfeldt-Jakob disease (a rare and fatal human neurodegenerative condition) in humans was discovered, the World Health Organization reported 175 cases of vCJD in the United Kingdom, and 49 cases in other countries from October 1996 to March 2011.

The risks associated with mad cow disease has dissipated but not disappeared. In July Taiwan lifted its temporary ban on Canadian beef after imposing a ban following an outbreak in Alberta last year. Before the ban, some $12 million of Canada’s $2 billion in total annual beef exports went to Taiwan, Canada’s seventh largest beef market. The knock-on effects can be catastrophic considering Canada’s beef industry contributes $33 billion worth of sales of goods and services either directly or indirectly to the economy.

Downtime costs and operating conditions in the food and beverage industry can potentially be amongst the highest in a plant because bacteria can be found in almost any handling scenario. Equipment must operate at top capacity in spite of high-pressure washdowns, vibrations and temperature fluctuations.

In the September issue, our contributors deepen the discussion that we need strict regulation, along with food inspection and prevention programs.

“Drive Solution” (submitted by Bauer Gear Motor), focuses on selecting suitable and reliable motors and high-performance gearboxes for equipment that can withstand the rigours of regular washdowns. Then, click on “High Standards” (submitted by Petro-Canada Lubricants) for a discussion on selecting lubricants with ISO 21469 certification; this guideline prompts plants to look at the entire lubricant product lifecycle, from formulating to production and packaging.

Keeping pace with best-in-class solutions and tapping into current standards will not only provide a measure of confidence, but will mitigate potential health scares and other vulnerabilities.