An emergency response plan speeds up return to normal operations 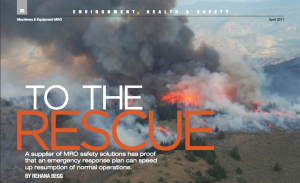 As the new wildfire season began on March 1, Fort McMurray residents were still reeling about the wildfire that razed the northern Alberta community last year. After sweeping through the city, the wildfire, dubbed “the beast,” would destroy about 2,400 homes and buildings and forced the evacuation of its 80,000 citizens. The estimated recovery damage was above $4.5 billion, making the disaster the most expensive in Canadian history.

Extended fire seasons, along with other factors conducive to extreme weather events, can easily become catastrophic by placing the lives of people, their homes and their livelihoods at risk. The Fort McMurray disaster set back oilsands production output by 1.2 million barrels per day for two weeks, resulting in losses of more than $985 million, according to the Insurance Bureau of Canada and Catastrophe Indices and Quantification Inc. Other businesses in the vicinity experienced an estimated net revenue loss of $54.7 million. The amount of lost labour income during the evacuation was estimated at $458.4 million, and physical infrastructure losses, was estimated at $4.54 billion.

While the human and environmental cost remains difficult to monetize, we can be grateful for the timeliness, skill and tireless commitment of first responders. Their ability to take action, along with the community’s assistance, brings to light the importance of being prepared when plants are flung into unfamiliar terrain.

Emergencies cannot always be anticipated but they can and should be planned for. A plant’s emergency response plan can help stabilize a company’s operations during a turbulent period.

Still, anticipating the response measures that need to be taken once emergency evacuation orders are given is a unique experience that Acklands-Grainger’s Fort McMurray, Alta. employees could never truly have been prepared for. Employees who were ordered to go home and evacuate the city describe the drive out of the city as “apocalyptic.”

How well plants or facilities respond to an emergency situation of this magnitude comes down to how well defined their emergency response plan is, says Jeremy Slater, regional sales manager, Acklands-Grainger.

“During the wildfire 80,000 residents were evacuated,” says Slater. It meant the displacement of 82 Acklands-Grainger team members, so the priority was to look after them and make sure they were safe. Once the evacuation order was issued, “you had leave with just your clothes on your back,” says Slater. ”Within 24 hours of the evacuation we had confirmed that all of our team members were safe and accounted for and began provided critical information, resources and support.”

Less than a week after the evacuation order, a team of designated employees was called back to the Fort McMurray branch, to help get first responders the supplies needed in order to save the town. “Acklands-Grainger is the largest supplier in the country of MRO safety solutions and first responders would require a lot of what we have when there’s a fire…It’s what we’re good at.”

The industrial distributor’s emergency preparedness effort centered around three guiding principles, namely, team, community and customers, says Slater, as he recalls how his teammates stepped in to help. “It was our team first because you can’t help the community if you don’t take care of your team members. That’s how we shaped all of our meetings when we were planning how to support the community.”

With roots in the Fort McMurray since 1974, Acklands-Grainger already had a reputation for its customized equipment maintenance and repair programs to ensure the safety and full productivity of the businesses they serve. Well before the Fort McMurray wildfires, the industrial distributor had participated in a number of emergency situations (including H1N1 and SARS), giving it the upper hand when it comes to mobilizing communities when disaster strikes. To boot, Acklands-Grainger has been a national founding sponsor of the Red Cross “Ready When the Time Comes” workplace disaster volunteer program since 2009. The program trains and prepares employees of Canadian businesses for large-scale disasters, such as floods, fires, tornadoes and major storms.

Back to the heat

Since there was no power in the Fort McMurray area, Acklands-Grainger’s head office instructed an IT team to set up computers and generators to get the building up and running. “Our systems had to work, we had logistics, product management, marketing… everyone had a role to play,” says Slater.

A hallmark of an effective preparedness process must balance planning and improvisation, says Slater. “Every head from every department in our company was assigned a task – whether it was making sure we had the right product in the right place to support rescue efforts or keeping track of our employees.”

Since roles and responsibilities assigned during disruptive events tend to be outside of the scope of normal business operations, having an effective means for communication was essential. Acklands-Granger employees held conference briefings twice daily and used a variety of communication tools, including text, email, a website team members could access to get updates and in-person meetings. Communications were configured in a way that ensured anyone with limited access to cell phones, would have the option of dialling in from anywhere so they could not only access updates from any location but also to ensure that the information originated from a verified source.

At the branch, a small team mobilized, camping out at the office so they were available around the clock to get emergency responders and infrastructure companies what they needed – gloves, masks, respirators, generators…

Emergencies and disasters can occur at any time and without warning ­– no plant or facility is ever immune. If Acklands-Grainger’s experience serves as a best-in-class example of emergency response preparedness, its best defense is arguably preparedness and its proactive stance on establishing frameworks and rigorously adhering to its comprehensive EH&S management system.

Mining, as well as oil & gas operators typically employ highly qualified staff who also have the requisite expertise to handle foreseeable emergencies. But sometimes, due to the severity of the hazard, the geographic area or number of workers involved, crisis situations may overwhelm the health and safety capabilities of the response team.

For Slater, a well-defined supply chain infrastructure, knowledge to support the operation and a working partnership to be able to execute on the plan are among a list of criteria that set his team apart. Slater is especially proud of the skill displayed by Acklands-Grainger’s leadership in helping mobilize the community in getting back on its feet. “During a crisis it really boils down to the training that you’ve provided your team. Because they have prepared, they can respond quickly and with confidence when they’re in these situations.” 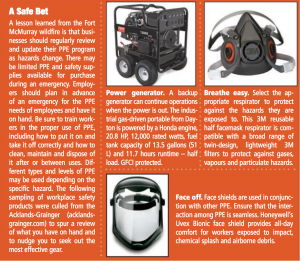 If your company does not have a comprehensive emergency response plan, it is time for an upgrade. Get started by accessing the Canadian Centre for Occupational Health and Safety’s practical workplace training and reference tool, Emergency Response Planning Guide. Written in plain language, the 155-page pocket guide offers guidance for conducting a risk assessment, evaluating potential losses, identifying potential emergencies, conducting drills, following up after incidents and continuously improving response capability. For more information, visit ccohs.ca.