A Matter of Survival

Humans have a powerful urge to race to the rescue when someone succumbs to a hazard in a confined space. Yet that is the worst possible reaction. Proper training and equipment, teamwork, cool heads and a disciplined sense of self-preservation... 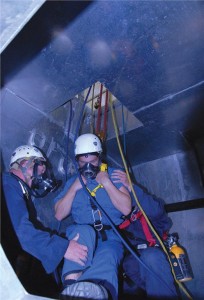 Two rescuers have located the victim and pulled him to a spot beneath the roof hatch. While attaching the haul system to his harness, they must also keep their own air hoses and lifelines from tangling. So far, the rescue has taken about 20 minutes. The tasks are realistic, completely absorbing and quite strenuous. Photo: Carroll McCormick

Humans have a powerful urge to race to the rescue when someone succumbs to a hazard in a confined space. Yet that is the worst possible reaction. Proper training and equipment, teamwork, cool heads and a disciplined sense of self-preservation are absolute necessities before ever trying to rescue anyone in a confined space.

“Every year, more people die attempting confined-spaces rescues than die in confined spaces at first,” states James Buntain, safety representative and industrial specialist at Survival Systems Training Ltd. (SSTL) in Dartmouth, NS. Like insects drawn to a honey trap, many workers have rushed to help fallen colleagues in confined spaces, only to die themselves.

Buntain is talking to the five-man crew of the Scotian Sea, an offshore support vessel belonging to St. John’s-based Secunda Canada. They are in Dartmouth to take SSTL’s three-day Confined Spaces Entry & Rescue (24 hours) course as part of maintaining their certification to perform confined-spaces rescues. I have joined them for the course.

The crew has already taken the Confined Spaces Entrant/Attendant course, so for them day one is a classroom review of regulations, hazards, techniques and fatal incidents. “Most confined space rescues are recoveries. The chances of getting someone out alive are slim to nil,” Buntain warns.

A confined space is defined as follows: It is enclosed or partially enclosed and has limited access/egress. It is not designed for human occupancy and can contain toxic fumes or substances.

After a few hours of lecture, films, and question and answer sessions, we pull on our coveralls and head outside to familiarize ourselves with the equipment and do some confined spaces rescues. The rest of the story is told in the photo captions.

Carroll McCormick is MRO Magazine’s senior contributing editor. He is based in Montreal.