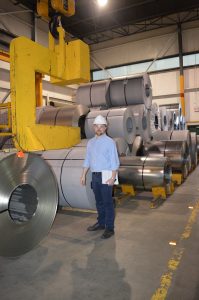 Philip Lawlor made a plucky move when he applied for the 2015 PEM Maintenance Award.

As a relatively new hire at Canam Group Inc.’s Mississauga, Ont. plant, the maintenance manager and his team of six craftsmen and one supervisor would be up against any number of Canadian plants vying for national recognition for excellence in maintenance best practices. Past winners – including such multinationals as OPG Pickering Nuclear, ArcelorMittal Dofasco, Glencore Sudbury Integrated Nickel Operations and Cameco – have demonstrated high levels of maturity across their maintenance departments.

The odds could have been stacked against Lawlor, an Irish native who had moved to Canada in 2014. Lawlor was about eight months into implementing a maintenance program at Canam Group’s Mississauga plant when he submitted an application for the award. When Lawlor was hired, Canam Mississauga had no measurement systems in place to gauge the impact of the plant’s physical assets or the level of maturity of asset management practices.

But the panel of jurors had compelling reasons for naming Canam Group as the year’s winner in the Best Maintenance – Large Plant/Facility category. Canam Mississauga showed evidence that the maintenance program was approached with a level of sophistication and demonstrated that the company had benefitted from its maintenance initiative within a short period of time. “The strength of Canam Group’s program was the diligence they showed,” says Braam Meij, VP, Customer Services, Siemens, who served as a juror in the category. “They looked at how they could improve the organization and they did it in record time. They looked at three aspects: people, process and technology.”

The Mississauga operation is one of 22 plants. The parent company was founded in St. Gédéon-de-Beauce, Quebec in 1961 and is today the largest fabricator of steel components in North America. The group averages 10,000 construction projects every year, Canam Group is a manufacturing company specializing in the design and fabrication of customized construction products and solutions for over 50 years. The Company operates in three groups of products and services: building construction, structural steel construction and bridge construction. Iconic projects include Rogers Place in Edmonton, BMO Field in Toronto, Maison symphonique in Montreal, and the Honda of Canada (Plant 2) in Alliston, Ont.

Task improvements
Lawlor confirmed his competence and leadership right out of the gate. When he joined Canam Group, he conducted an assessment of the team’s maintenance planning activities in order to grow the maturity of the plant. Based on these results, one of his first tasks was to create systems whereby production could request maintenance time for both proactive and reactive job types and so that maintenance could schedule priority work at least one week in advance. Within six months the Mississauga plant was transformed from doing mostly reactive work to one that enforced a maintenance program drawing from tried-and-tested best practices, such as maintenance planning and total productive maintenance. The Canam crew is currently in the throes of aligning key performance indicators as a way to forge a strategic approach across the plant.

A newly installed maintenance program would need to be in keeping with the multinational parent company’s values of high-efficiency production. That is why Lawlor drew from experience and looked to a South African asset management company, Pragma, for inspiration. He adapted their maturity-modelling concept and developed his own agile performance improvement framework for manufacturers as part of his masters degree thesis back in 2011. The model measures current performance levels through assessment and matches maturity levels and KPI targets in accordance with six maturity levels, namely, firefighting, stabilizing, preventing, optimizing and excellence.

An assessment-based survey completed by 13 employees in key positions of operations in April 2015 showed Lawlor precisely which areas to focus on and which high-level factors needed improvement, says Lawlor. A follow-up assessment in October 2015 showed improved results with two of the 30 good practices scoring 100% on the assessment, while the remainder having scores ranging from 60% to 85%. “Initially we scored 9% overall, six months later we scored 77%. Through consensus, it showed me that we were improving based on the implemented systems, business processes and training,” says Lawlor.

These assessments tie in with the maturity model because Lawlor is able to create a key performance indicator (KPI) target. “We scored 77%, which put us in the optimizing phase. Obviously, the target now is to be excellent and to select a new KPI target based on the assessment information.”

First and second line roles
Lawlor created first and second-line roles as a way to redirect the crew’s focus from breakdown work and to improve overall communication amongst departments. “The first-line role is the person spearheading the responsibility for reactive work and the second line is given planned work so we can break out of the reactive cycle many plants find themselves in,” says Lawlor, who explains that two craftsmen respond to breakdowns through the first line roles, while the remaining four focus on planned work and this improves the reliability of the equipment by reducing interruptions to planned work.

Work is managed daily through a paper-based (carbon-copy) work order management system and line-side planning board. During weekly asset-care meetings the operations and maintenance team jointly assess the work to be done for the upcoming week. The purpose of the meeting is to ensure the right skills, spares and machinery is available for prioritized work, says Lawlor.

Waiting on information and instructions, travelling to and from jobs, finding tools and materials, and waiting on other people are examples of waste. Lawlor conscientiously documents these types of activities in order to isolate bottlenecks and increase wrench time. “It’s not making them work harder, but it is creating that environment to be productive and removing the things that stop employees from doing that,” he says.

Expediting communications
While the work order system is paper-based, Lawlor does not yet see the need for a complete electronic system. Although completed preventive maintenance and requests are logged in an EAM system, the process will remain paper based on the request and scheduling side for now. “At the moment we are really focused on getting good at following business processes, and using paper really helps us with that,” explains Lawlor. “Technology, as you know, only has one purpose: to reduce the duration of the time it takes for us to complete activities. It makes it easier for us to report, retrieve and capture data. Having a fully electronic system is not going to add any value to the maintenance team at the moment. I am not seeing that need yet, but I think it will naturally go in that direction.”

Performance management
Every day the team analyzes work order feedback in order to identify the assets where they have top losses. “For instance, just this week we looked at a failure on a splicing line. We had a pneumatic valve failure because it wasn’t being lubricated,” says Lawlor. “It’s such a simple thing, but we lost three hours diagnosing it and then repairing it. But now we know what caused it and we’ve rectified the root cause. We have a 6’ x 4’ problem-solving whiteboard dedicated to root cause analysis in the workshop to help us make sense of why breakdowns happen.”

Weekly comparisons of planned work are charted and six-monthly health-check reports are furnished to management. Important measures include planned completion rates, amount of minutes spent doing breakdowns, and work planning and control. “If I was to focus on one thing, then work planning and control is the heart of it,” says Lawlor. The metrics also provide a sense of what and where the least reliable assets are. By isolating the least reliable assets, Lawlor is able to consider whether preventative maintenance is needed on an asset, or what types of failures are prevalent, and then perform root cause analysis to prevent recurring failures.

TPM for the flash welder
A key improvement project was to apply a total productive maintenance (TPM) model to manage the overall effectiveness of the plant’s most important production line, the flash welder (“considered the heart of the factory”). Lawlor adapted a model used by a former U.K. colleague, Peter Willmott. The program essentially enables employees to take ownership of their equipment and workspaces on the main production line. To this end, an electronic schedule is set up so operators can update the results of machine inspections and cleaning schedules. Operators were also given lubrication training and a photographic manual of instructions so operators could follow standards.

An organized workshop
With the maintenance workspace redesigned through 5S, finding tools and conducting inspections is a cinch. “We designed our workshop around some of the routine work that we do. If you think of a welding plant – preparing guns and preparing welding machines – these are repetitive tasks. So we developed stations where all of that work can be done easily, and we have reduced some of the time spent on these repairs.” The walls were painted white to increase light levels and new standardized workbenches were purchased. The total workspace was divided into separate areas with a dedicated service area, personal work area and machine shop for such tasks as cutting, drilling, grinding, welding and parts repair. PPE was organized along one wall using a standardized layout so the crew could store and inspect safety equipment, harnesses and work wear.

Sum of the parts
Significant strides have been made since the new maintenance program was implemented, says Lawlor, who also credits the manufacturing teams and the general manager, Warren Fournier, for providing ongoing support. “We have increased costs a little in the short term – more lubrication, new tools, workshop organization… but on the flip side, we have increased the team’s efficiency and effectiveness, so we do more of the right work in the same available time. We’ve cleared all the small backlog jobs and spend more time now on projects and continuous improvement, which adds more value.”

If gaining recognition for a job well done was a motivation, Lawlor and maintenance team have met their mark. While the process has cleared a path for a new vision for maintenance at Canam Group Mississauga, Lawlor says the process gives back much more. “There are still improvements we can make, and I know we’re heading in the right direction.”

This article is published in the February 2016 issue of Machinery and Equipment MRO magazine.