A digital future for maintenance 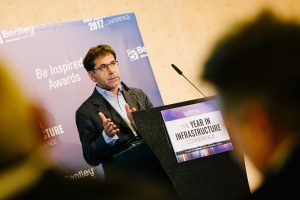 Connectivity presents unprecedented opportunity. That much was clear after attending Bentley’s Year in Infrastructure 2017 Conference in Singapore in October.

Siemens and Bentley Systems have formed a technology-software partnership that is expected to accelerate digitalization and boost infrastructure project delivery and asset performance.

As a keynote speaker, Helmuth Ludwig, Global Head of Information Technology for Siemens, illustrated his company’s approach toward going digital. He described how using technology, in collaboration with Bentley’s ContextCapture software, could provide an immersive digital context of a process plant, ultimately creating a 3D “digital twin” of the plant in which all components are linked through Siemens’ cloud-based, Internet of Things operating system (MindSphere).

Then, using more software (Bentley’s AssetWise), the user can query the health of specific components. One can watch a motor vibrating to failure, or access a replacement motor with Siemens PLM software before having custom motor mounts designed to address the vibration problem – and then have it 3D printed! 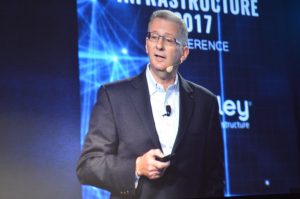 Clever things are being done across the industry.

In a relatively less complicated application, Rexnord, a manufacturer of process and motion control components, is embracing IIoT through its “connected” smart gear drives that are equipped to monitor oil health in real time, detect vibration, load, speed and throughput. Through an onboard edge device, the component translates performance data into alerts and recommended corrective actions.

Similarly, Schneider Electric is on the IIoT bandwagon with its launch of the Vijeo 360 augmented reality software solution, which turns an ordinary smartphone or tablet into a tool for evaluating production and maintenance. Once the phone is in camera mode, the device detects critical equipment and pulls data from PLC, SCADA, or SQL databases and superimposes it next to the relevant equipment, giving operators instant KPIs to assist with troubleshooting. Maintenance technicians and operators can access user instructions and diagrams and, for added safety, can open electrical cabinet doors virtually with no risk to themselves.

From the design phase, through to product lifecycle management, connectivity has become ubiquitous. Yet, when it comes to applying these technologies, statistics suggest that firms are slow on the uptake.

Consider the findings of an Infosys global study that looked at the maturity of asset efficiency strategies in industrial manufacturing worldwide. While 81 per cent of respondents are aware of the potential of machine condition surveillance for enhancing maintenance, only 17 per cent have put such principles into practice. The study, which polled 433 industrial manufacturing executives in five regions, namely China, France, Germany, the United Kingdom and the United States, also found that one fifth (20 per cent) believe that by 2020 they will not achieve anything beyond recognizing the potential of the Industrial Internet of Things or Industry 4.0 concepts.

The study reveals that the rate of implementation of asset efficiency strategies varies significantly across the regions surveyed.

The notion that a Canadian study would find similar discrepancies when it comes to their machine data technology maturity levels and abilities in “advanced manufacturing” or IIoT would be just an educated guess.

But there is no doubt digitalization is the future of manufacturing. And by extension, production processes and maintenance workflows are moving in lock step to exploit the availability and immediacy of relevant data to increase efficiency and reduce downtime.

This editorial was published in the November 2017 issue of Machinery and Equipment MRO.

Rehana Begg is the editor of Machinery and Equipment MRO. Reach her at rbegg@annexweb.com.