Schweinfurt, Germany – Shaeffler AG has destroyed 26 tons of counterfeit roller bearings marked with the INA and FAG brand. Their value was over $1.4 million. 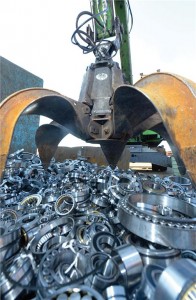 Photo courtesy Shaeffler AG. A big claw was used to lift the fake bearings into a scrap press.

Schweinfurt, Germany – Shaeffler AG has destroyed 26 tons of counterfeit roller bearings marked with the INA and FAG brand. Their value was over $1.4 million.

To destroy the bearings, they were lifted by the gripper arm of an excavator into a scrap press. The bearings came out of the press chopped and broken into pieces or so badly damaged that they were rendered unusable. Large-size bearings with an outside diameter of more than one metre, which were too big for the scrap press, were destroyed with a cutting torch.

“Brand and product piracy is not a phenomenon that is limited to Asia or South East Europe. It also takes place right on our doorstep,” says Ingrid Bichelmeir-Böhn, leader of the Global Brand Protection Team at Schaeffler. “The German and European markets are no longer only flooded with counterfeit luxury or consumer goods, there is also an increase in counterfeit industrial products that are relevant to safety, such as rolling bearings.”

Groups such as the World Bearing Association (stopfakebearings.com), the German Anti-Counterfeiting Association (markenpiraterie-apm.de) and the Quality Brands Protection Committee (qbpc.org.cn) ensure that the public is informed about the risks caused by the use of counterfeit industrial products. These organizations also work in conjunction with authorities, with the objective of creating the legal and organizational prerequisites to effectively fight counterfeit products.

Shaeffler recommends that, in general, it is always best to purchase goods from a source that is 100% reliable, i.e. from manufacturers and authorized distributors. In the case of any uncertainty that distributors and customers may experience during incoming goods inspections, Bichelmeir-Böhn and her team can be contacted at piraterie@schaeffler.com.