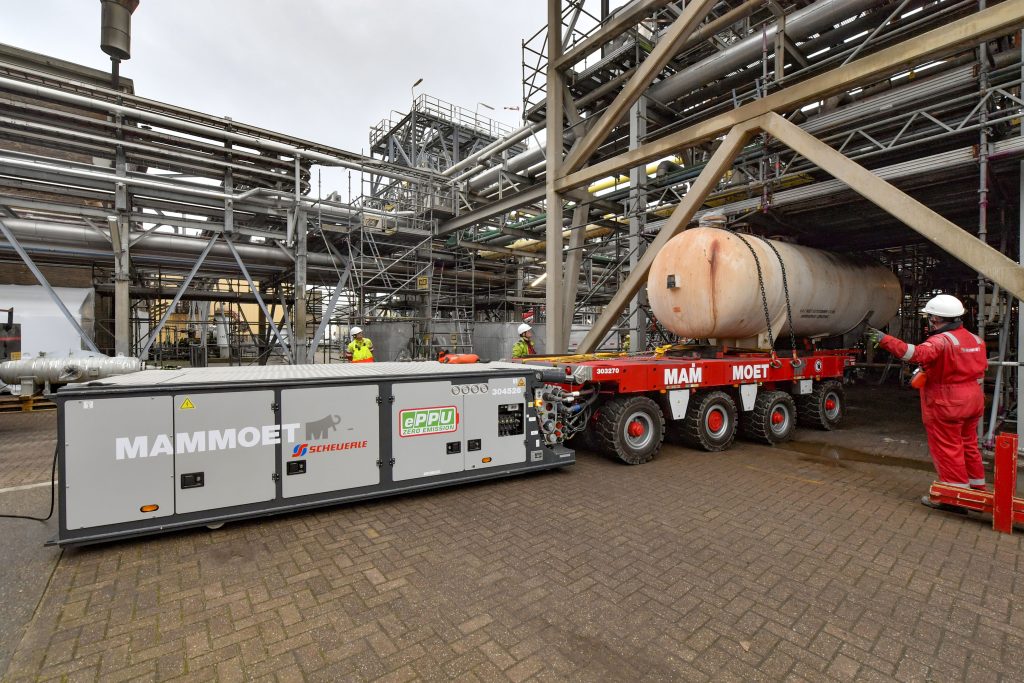 Mammoet has developed world-first electric-powered heavy transport while undertaking thereplacement of a production vessel at a chemical plant in the Netherlands.

The Shell facility produces feedstock for a range of applications including medical equipment, car components and cellphones.

Mammoet has partnered with Scheuerle to transition its self-propelled modular transporter (SPMT) fleet from diesel to renewable energy.

The electric propulsion unit (ePPU) was used with four axle lines of SPMT operating in a tight area of the existing plant.

As a result, not all SPMT lines could be positioned beneath the outgoing vessel, meaning it needed to be secured above the front two axle lines of SPMT, with the ePPU acting as a counterweight to balance the vessel as it was transported. A crane was then used to remove the old vessel and lower its replacement onto the SPMT in the same position. This was then moved back into place ready to be installed and commissioned.

“The ePPU is a really important step in how we support our customers with decarbonizing projects,” said Ludo Mous, Operations Director, Mammoet Europe. “But in this case, the benefits were not limited only to a lower carbon footprint. With work taking place in a highly confined area, we would have been highly conscious of the emissions generated by a typical diesel PPU, and would need to carefully manage operatives’ exposure to it. By using an electric model, we removed this issue completely, whilst also creating a much quieter working environment.”