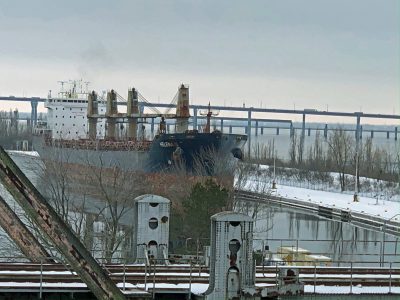 The St. Lawrence Seaway Management Corporation (SLSMC) announced that 38 million tonnes of cargo transited the system during the 2021 navigation season.

Iron ore, steel slabs and other steel products posted strong performances, contributing to over 10.5 million tonnes of the total. Petroleum products and other essential chemical products were up some five per cent, and are starting to return to more normal levels. Such varied cargoes as stone, cement, potash and aluminium were also up. Grain, at 10.6 million tonnes, is below last year’s results due to a smaller crop and drought conditions in both western Canada and the U.S. mid-west. Canadian grain, however, was still tracking at a five-year average.

“At the Seaway, we continue to demonstrate our resiliency and operational sustainability,” said Terence Bowles, President and CEO, SLSMC. “In spite of the  many challenges experienced by the transportation industry this past year, the Seaway was able to maintain its operations and its position as a reliable commercial transportation corridor, ensuring consistent and predictable service for its customers and supporting the Canadian and U.S. economies during this difficult period.”

Over the past navigation season and through the upcoming winter months, close to $70 million is being invested in SLSMC maintenance and repair work. Over the past decade, the SLSMC and GLS have invested CAN$925 million in modernizing the binational Seaway infrastructure assets.

“Throughout another year of challenges to the transportation industry, the Seaway’s performance highlighted its continued resiliency as a maritime supply chain,” said Craig H. Middlebrook, Deputy Administrator of the U.S. Great Lakes, St. Lawrence Seaway Development Corporation (GLS). “The Seaway handled an increase in cargo tonnage over the navigation season, and did so safely, reliably, sustainably, and in an environmentally sensitive manner.”