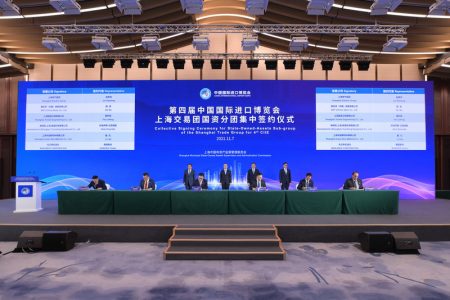 Leng Weiqing, Chairman of Shanghai Electric Group, who presented at the ceremony alongside Vice-President Jin Xiaolong, signed the agreement.

The partnership will allow the two companies to benefit from Shanghai Electric’s infrastructure construction experience and SKF’s supply chain to boost their R&D capacity.

China’s largest import trade fair, CIIE 2021, held from November 5-10, was the fourth edition that Shanghai Electric attended, which also saw the company inking over 10 import procurement contracts and framework agreements with global companies during the six-day event, with the total value of the deals exceeding 1.7 billion RMB.

“CIIE is a fast and efficient matchmaking platform for multinational companies to find the golden key to open the gate to China’s market, as well as a window for global businesses to establish in-depth communication channels with Chinese customers. On this platform, Shanghai Electric hopes to seek new partners and create more win-win cooperation opportunities with world-leading enterprises,” said Jin Xiaolong.