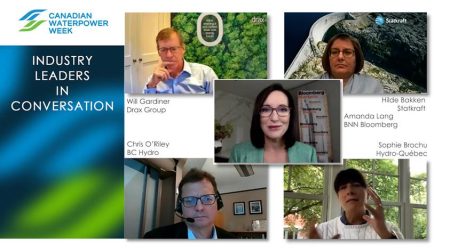 “What was most striking about this year’s event was the strong sense of urgency shared by presenters and participants,” said Anne-Raphaëlle Audouin, President and CEO, WaterPower Canada. “We’ve got less than a decade now to meet ambitious and essential emissions reduction targets, and our industry is ready to play what can only be an instrumental role. But what the Conference also highlighted is the need to move from targets to action.”

Dolf Gielen, Director, Innovation and Technology Center, International Renewable Energy Agency, helped set and reinforce the tone of hydropower as critical element in energy transition during his opening keynote address at the conference.

“I am both moved and honoured to receive the Woman of Waterpower Award today. To me, accepting your recognition is propelling to help even more younger women feel that they too can have their place in the hydropower and renewable energy ecosystem,” said Bouchard. “On behalf of all the employees I work with, who get up every morning to make the world a more sustainable place, and on behalf of the men, who have reached out to me and allowed me to be who I am, merci.”

“It’s interesting when you look at the role that hydro historically has played. Certainly, in Ontario hydro is synonymous with electricity,” said Butcher. “That legacy is what we need to build upon. There are really three elements that we’re working on at OPG. That’s maintaining our current assets, so how to refurbish them in a way that allows us to ensure that they’re going to be there for the next 100 years. The second thing we’re working on is highlighting the expansion of hydro, so how can hydro help from a storage perspective, or how does hydrogen play with hydro. And then finally building new. So whether it’s completely redeveloping some of our old sites, or building new greenfield sites. Those are critical element that we’re going to develop more in the coming decades to be able to address climate change.”