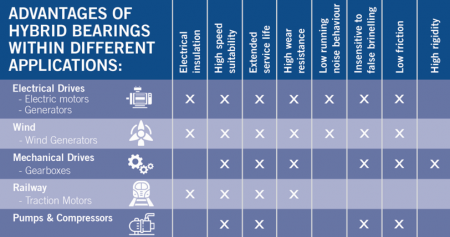 The table provides an overview of the most common hybrid bearing applications and the advantages of the bearings.
Photo: NKE.

“At first glance, this material pairing is highly unusual, but it offers many advantages in an enormous range of applications, which significantly increases the reliability of the overall system,” said Michael Rössl, Application Engineer, NKE Austria.

The silicon nitride rolling elements are 60 per cent lighter than those made from steel and are suitable for high rotating speeds.

“Consequently, NKE hybrid bearings can reach limit speeds that are over 20 percent higher than conventional standard bearings,” said Rössl. “Even at these very high and demanding speeds, NKE hybrid bearings demonstrate excellent performance characteristics and minimal running noise. There are therefore particularly well suited for use in high-speed electric motors.”

“In fact, hybrid bearings with ceramic rolling elements are primarily designed for applications in which maximum electrical isolation is required and/or high speeds are involved. Hybrid bearings offer maximum isolation protection because the ceramic rolling elements themselves have an electrically insulating effect and thus prevent a corresponding passage of current,” said Rössl. “The use of frequency inverters often causes electrical damage to the bearing. With lower currents, a bearing with an electrically insulating coating among other measures can help to alleviate this. But only a hybrid bearing offers optimum protection against very high currents.”