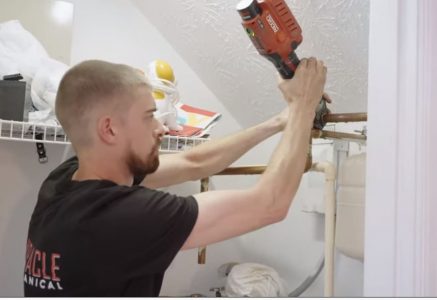 Ridgid, a part of Emerson’s tools portfolio, announced their sponsorship of the first Miracle Mechanical project, a new initiative that completes plumbing, heating and air conditioning work for those in need at no-cost to the homeowner.

The non-profit, headquartered in Georgia, is spearheaded by plumbing and mechanical contractor Brent Ridley.

“I have been doing tool reviews for many years, but I wanted to do more with my platform and really try to help some folks,” said Ridley, who along with working as a contractor is also a tool reviewer and co-host of the Tool Pros podcast.

The Miracle Mechanical team recently completed its first project for homeowner Nick Hendricks and his family in Monroe, Georgia. Hendricks had been seriously injured in a car accident. While he was recovering, the family’s home began experiencing septic system issues.

“The repairs mean everything to us at a time like this,” said Hendricks. “It had come to a point that we were afraid when it rained that the toilet downstairs would overflow due to groundwater getting in the septic and backing up through the toilet. Any time it rained the toilet would bubble and gargle and it was very unsettling.”

“At Rigid, we’re committed to not only supporting the trades, but also giving back to the community,” said Becky Brotherton, Senior Marketing Communications Manager, Ridgid for Emerson. “It’s a privilege for our team to be a financial supporter of the work Miracle Mechanical is doing to help others.”