Builders and dreamers: How young women are bridging the STEM skills gap: Part 1

Build a Dream guides girls to careers in manufacturing, automation and STEM, while advocating for workplace diversity.

When Elizabeth Moses, a machinist at Windsor Mold, arrived at St. Clair College in 2016 in the general machinist apprenticeship program, she was looking for a mentor who would help her to navigate the industry—one she had been disheartened about entering as a young female.

In high school, Moses discovered she liked to work with her hands after signing up for a woodworking course. A teacher recognized her aptitude for building and encouraged her to join the school’s FIRST Robotics team. Over the next three years, Moses learned about opportunities in manufacturing automation and determined that she would pursue a career in the trades.

“A lot of people didn’t believe I would be successful as a young woman,” she says. “The only person who was really encouraging was my teacher. And because of that reason—because he believed in me—I wanted to do it regardless.”

Moses now speaks to high schoolers as an ambassador for the Build a Dream organization, a Windsor, Ontario–based non-profit that brings industry and educators together to inform female students and their parents about career pathways in traditionally male-dominated fields such as skilled trades, STEM, emergency response and entrepreneurship.

“When I saw young women, I wanted to make sure they heard the message: yes, I believe in you. Yes, you should believe in yourself. And yes, you are more than capable of doing this job,” Moses says. “The support that I didn’t have—I wanted to give it to them. Through Build a Dream, I was able to do that.” 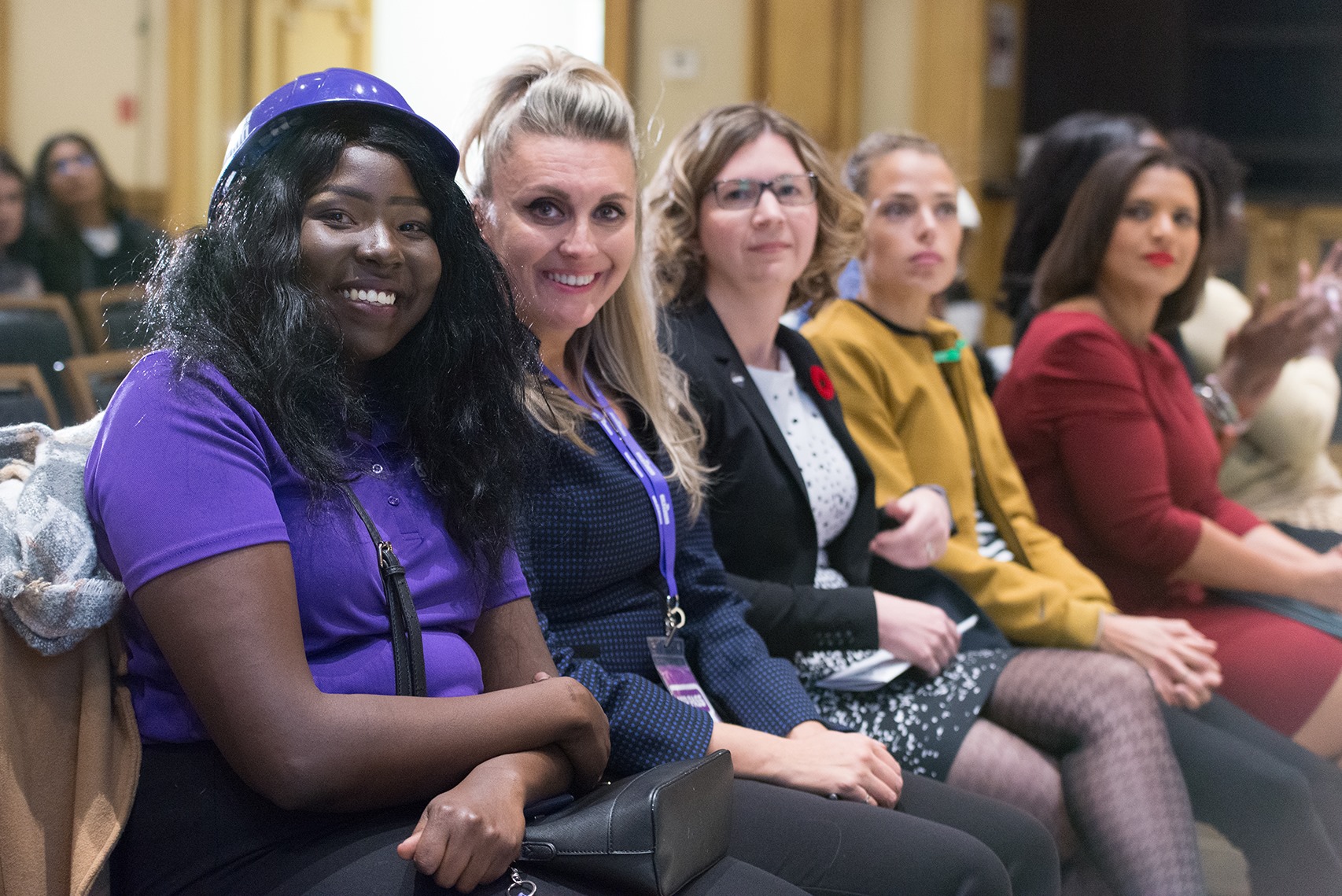 Moses, who graduated with her certificate of apprenticeship in 2019, steps away from Windsor Mold’s factory floor several times a year to travel across Ontario on behalf of Build a Dream and promote the skilled trades at career information events. She met Nour Hachem-Fawaz, Build a Dream’s founder, when she was recruited into St. Clair College’s general machinist apprenticeship program, which Hachem-Fawaz was heading up at the time.

Build a Dream’s mission is two-fold: attracting more women to industry will bridge the skills shortage by tapping into a talent pipeline that is historically underused, and it will boost diversity and inclusion. In addition to the career expos, Build a Dream runs camps and workshops for both the classroom and workplace that aim to increase self-esteem and encourage teamwork while introducing young women to new technologies.

“Build a Dream really starts the journey early,” says Hachem-Fawaz. “If young women are making career-informed decisions, then they can lead their lives into high-paying jobs that are in demand and have security.” 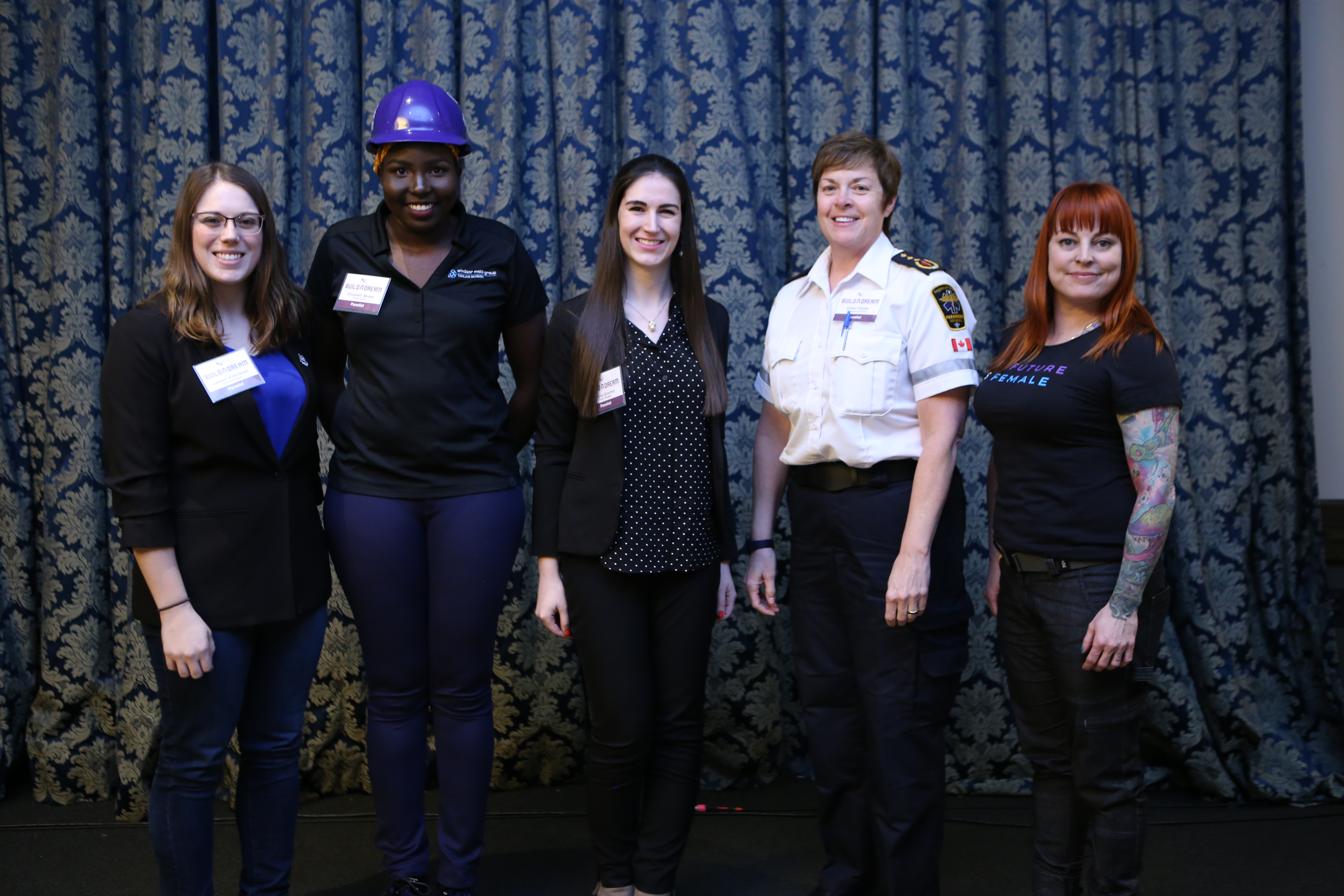 Hachem-Fawaz began her career helping women on the path to job security while working at Women’s Enterprise Skills Training of Windsor (WEST), a non-profit committed to equipping women—particularly marginalized women and youth, who face more barriers in the workplace—with the training and employment tools they need to enter the workforce.

In 2012, recognizing an underrepresentation of women in the trades sector, WEST conducted more than 500 interviews and surveys to uncover what factors influence the career decisions of female students. “What we found was that young women still felt that certain jobs were very male-dominated, and they based their career decisions on where they saw themselves as females,” says Hachem-Fawaz. “Gender was a huge factor.”

Parents ranked highly on the list of influences, as did teachers and support staff. If a student’s parent worked in the trades or emergency response, she had a higher likelihood of entering those industries herself.

Build a Dream is born

That early research into the role of parents in their daughters’ career choices was the foundation of Build a Dream, which started as a one-off information event on STEM and trades roles at St. Clair College, presented by WEST, the University of Windsor and several local school boards.

The ability for parents to hear directly from industry and female leaders made the event a success, says Hachem-Fawaz. “Ultimately, when we talked to parents, what they really wanted was that security – that if their daughter went into a field a) there would be opportunity, b) she’d be accepted, and c) that it would lead to financial success for their child.”

Hachem-Fawaz registered Build a Dream as a non-profit in 2017, and began holding events across Southern Ontario. The organization now hosts career information sessions in 10 Ontario cities, with over 10,000 attendees annually and more than 200 exhibiting companies. There are plans to expand the brand into Alberta in 2020.

“We’re just one of the many touch points young women need,” says Hachem-Fawaz. “[We] take the intimidating factors out and build their confidence, so that once they get to that significant decision—whether it’s going to post-secondary, going into an apprenticeship or going straight into industry—they feel confident enough that they have the knowledge and the skill to pursue this opportunity.” 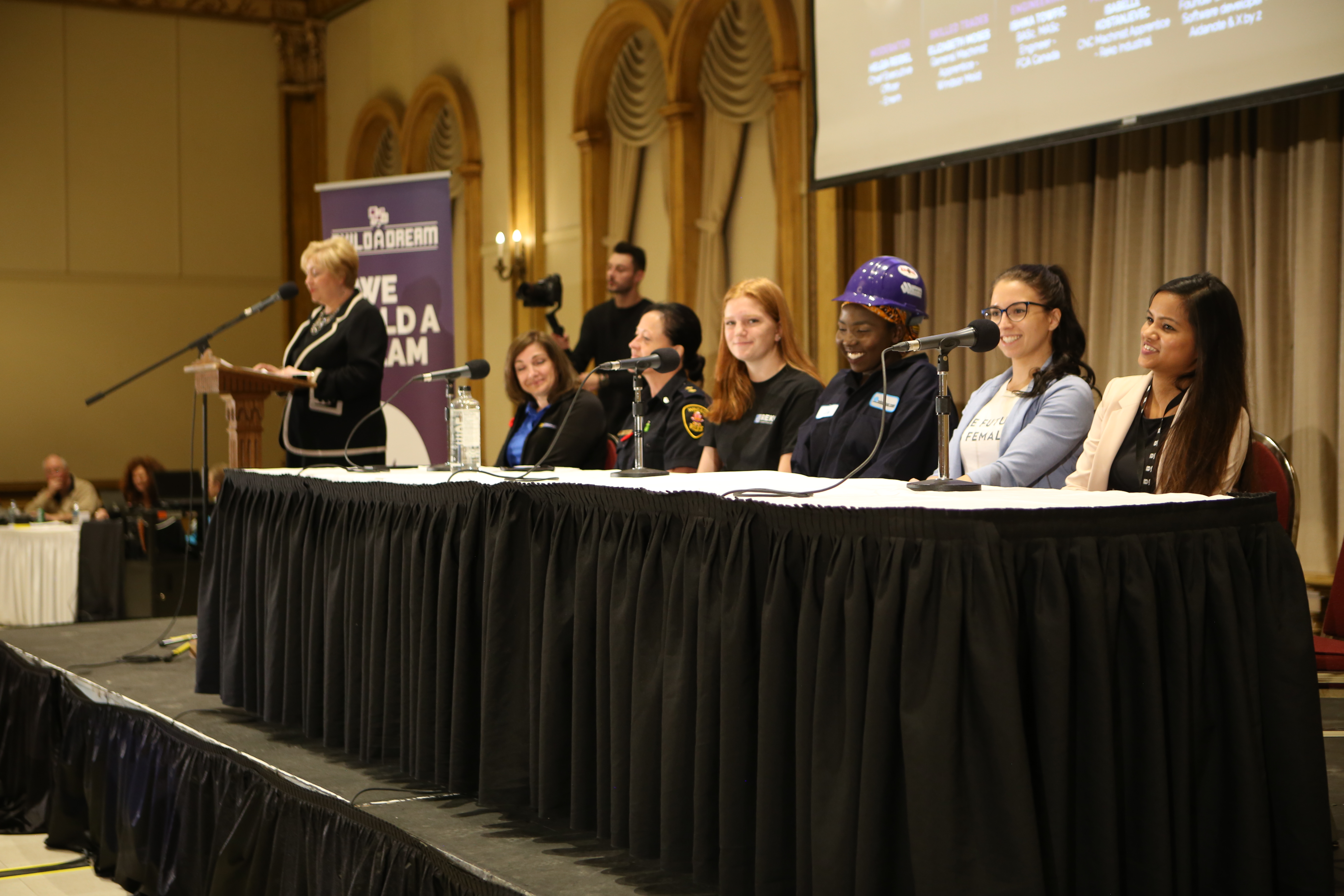 With the Windsor-Essex region located in Southern Ontario’s manufacturing corridor, Build a Dream is well connected to industry and sees partners such as Linamar, Windsor Mold, CenterLine, Reko, and Laval Tool and Mold at its area events.

The organization has pledged its commitment to increasing female representation in the workplace as part of the Canadian Manufacturers & Exporters “We Can Do It” campaign promoting the Women in Manufacturing program, which advocates for industry to hire 100,000 more women by 2023. (Women currently comprise 28 per cent of the manufacturing workforce in Canada.)

At every Build a Dream event, a FIRST Robotics team showcases an automated application to demonstrate how STEM education is used in practice, and to help young women visualize themselves in tech-centric roles.

Hachem-Fawaz has been working with FIRST Robotics since 2015, when she first judged one of the organization’s Windsor-area competitions. She noticed that while female students were represented on the participating teams, they were only filling the marketing or business roles instead of the STEM-related ones.

So in 2017, along with long-time FIRST Robotics volunteer SheriLynn Koscielski, Hachem-Fawaz launched Windsor’s first all-girls robotics team with a roster of female mentors. “I [thought] that’s what it’s really going to take to get more women to see themselves in the actual building and designing of the robot,” she says. The team, called the Build-a-Dream Amazon Warriors, has since enjoyed considerable success—they advanced to the FIRST Robotics World Championships the following year and continue to compete.

Programs aimed at women in manufacturing

Other initiatives in the Windsor-Essex region are popping up to draw more women into manufacturing. In late 2019, Automate Canada, the industrial automation arm of The Canadian Association of Mold Makers (CAMM), announced a partnership with WETech Alliance, the region’s entrepreneurship accelerator, to launch the Innovation Catalyst Cohort. For the next four years, the program will bring women working in industrial automation together for six-month stints to solve real-life business challenges.

The innovation program is supported by the Windsor-Essex Economic Development Corporation, which in August 2019 received $692,000 from the federal government to assist female entrepreneurs in scaling their businesses in “emerging technology sectors”­ (such as automation and automotive), in an effort to boost the number of women-owned SMEs in Canada up from 16 per cent.

Hachem-Fawaz’s mother was one such entrepreneur, who re-entered the workforce to sell automotive parts to the aftermarket after 18 years of caring for her children. “When my mom first went into the workforce, she had never finished high school,” says Hachem-Fawaz. “I saw how she persevered through all her challenges, and then entered an industry that was very male-dominated.”

Seeing her mother’s story reflected in the women she has encountered throughout her career is what Hachem-Fawaz says drives her work with Build a Dream.

“I made it my commitment and purpose to really break down those barriers for women, because I feel that financial independence not only builds economies and builds families, but allows women to have the power of choice,” she says. “To have power in your own choices for your future is so key to living a successful, prosperous, healthy life.”

Part two of the article can be seen here.

This article was originally published in Manufacturing AUTOMATION.

Kristina Urquhart is the editor of Manufacturing AUTOMATION and Pulp & Paper Canada magazines.